But you'd be at the right stop to go downtown and hang around the President's shooting scene.

And that is exactly where Herbert Leon Lee calls his girlfriend from a couple hours after the assassination.

PS Earlene doesn't ask him about a cop killing

Sometimes the truth just stands there out by the street!
_________________
Release clear scans. Reveal the truth about Prayer Man. Preserve the history of the assassination of JFK.

I found David Joseph's post and the diagram suddenly looked familiar.
Just a possibility but when I compare a rough sketch in the address book vs Beckley I am amazed the similarity 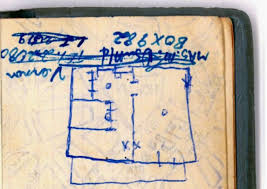 Screen porch in front, two rooms on left side, kitchen in back on left side, door in back on right side \ right side is unknown mostly due to not being allowed in the rooms or they were locked (see x's), a doorway to the right from the left where a bathroom is at Beckley... are matches.

Weird huh? Diagram if as Martin Shakleford contends repeatedly its just a rough sketch so it doesn't show the bathtub in the kitchen (though there was one in the kitchen at Judy's place) so I find it difficult to defend it being so "rough" that a TUB in a place so obviously out of place and possible to run into in the midst of retrieving a secret journal and microscope might run into in the dark.... why include the kitchen counter details, lights and other superfluous details but not a huge cast iron tub in the middle of a room??

So this diagram is supposedly a place Judyth Baker stayed... yeah that's it.

looks like a diagram of the tiny room Lee looked at and passed up.
Was it to show Marina? Or perhaps whom steered him to the rooming houses, ... Ruth?

According to Patricia Puckett-Hall, the grand-daughter of Gladys Johnson, there were 18 rooms at 1026 North Beckley and all of them were filled at the time of the assassination.  I've only ever seen a partial list, which includes the name of Herbert Lee.  Does anyone know who the others were?
This interview of Pat Puckett-Hall is quite informative.  She refers to Oswald as "Mr. Lee", which could ostensibly be referring to Herbert Leon Lee.
https://www.youtube.com/watch?v=bj3RsTcgGOU

Phil Hopley wrote:According to Patricia Puckett-Hall, the grand-daughter of Gladys Johnson, there were 18 rooms at 1026 North Beckley and all of them were filled at the time of the assassination.  I've only ever seen a partial list, which includes the name of Herbert Lee.  Does anyone know who the others were?
This interview of Pat Puckett-Hall is quite informative.  She refers to Oswald as "Mr. Lee", which could ostensibly be referring to Herbert Leon Lee.
https://www.youtube.com/watch?v=bj3RsTcgGOU

Phil, she was 11 years old and is trying to recall minute detail.

Her grandfather testified that they had 17 bedrooms but could not recall if they were all filled.

Maybe someone can have a go at explaining that part of his testimony.

Mr. JOHNSON. Well, they wanted to see the rooms. They had described his age, his build, and so forth, and we had two more boys rooming there. Uh-- and my wife was going to let them see the rooms.
Mr. BELIN. Your wife was going to let them see the rooms that you had--and you had a total of 17 roomers, I believe you said?
Mr. JOHNSON. Well, no. I don't know just how many roomers we had. We have 17 bedrooms--but I don't know just, at that time, how many roomers we had.
But, anyway, we had a couple of boys around his age that had moved in just a few days before, and, so, she was going to let them see their rooms.
Mr. BELIN. All right. And then what happened?
Mr. JOHNSON. Well, I saw his picture on television and I hollered at them and told them. They were out in the back, started around the house to the--uh--basement where these boys room. The bedrooms are all in the basement. And they were going back there.
And--uh--I just called them and told them, I said, "Why, it's this fellow that lives in here."


So according to AC Johnson, the cops gave a description of Oswald -- but that does NOT bring to mind the CURRENT resident of the tiny room. It brings to mind two similar generic-looking young white males who had basement rooms but had moved out a few days before!

Then he sees a photo of Oswald on TV well before such a photo was ever shown - and bingo! He suddenly realizes it's the dude in the little room.

The two who had left? James Watson was probably one and Herbert Lee the other.

There were two who others miss-remembered as Oswald. Herbert Lee was one and Floyd Degraffenreid was the other.

I think what happened was this: James Watson rented room 17 or 18 per his FBI interview. This looks like it was in the basement.

Herbert Lee initially rented the "little room" aka "room 0". He was later offered a larger room and and took it - in the basement. My best guess is that Floyd then took over Room 0.

I base the above on the following facts:

1. Gladys Johnson testified that she offered "Mr Lee" a larger room as soon as one became available but he declined when one was offered (she had to say this because the story needs "Mr Lee" to remain in Room 0)

2. Gladys would later tell reporters that "Mr Lee" liked reading Westerns. This was definitely Floyd as there is an FBI report describing him as always wearing a cowboy hat. His FB page shows he still wears one - and more importantly - the only book he lists is - a cowboy book!

So Oswald becomes a mish-mash of memories of the two young men who previously occupied the "tiny room".

You might wonder why AC Johnson does not think of Floyd after hearing the Oswald description. But Floyd was actually noticeably shorter than Oswald. The story, as I said, that he saw a photo of Oswald on TV and was able to place him in Room 0 was totally made up after the fact. All they found in that room was cowboy books, an ashtray and whatever else Floyd owned. Who knows? Maybe there WAS a holster in there? But if so, it belonged to the cowboy.
_________________
Australians don't mind criminals: It's successful bullshit artists we despise.
Lachie Hulme
-----------------------------
The Cold War ran on bullshit.
Me

So how on earth did he know who had just rented.
Let alone the tiny room's renter or if the room was even occupied.
Room 0 or O has still not been determined.
Tiny room certainly was not called room O or Zero when park service checked the rooms and their enumeration. Its odd Earlene would know with her slip of paper exactly that rooms tenancy but AC Johnson is clueless.
His and Gladys testimony were a few minutes apart, and he sat in on hers(?) thus could have gone to Beckley grabbed the register Gladys conveniently forgot and testified more aware of the information requested.
But no, couldn't have that register or a page from it entered into evidence nor any history of occupants, rents, and occupancy.
Cat meet bag.
Ed

I havent read all the replies, but Oswald most certainly never lived there. He used on his PO Box aplication 3160 N Beckley.

"Oswald had been using Dallas post office box 2915 for his mail, but there does exist a change of address form dated March 6, 1963, switching from Elsbeth to West Neely. The envelope containing Marina’s first letter to Ruth Paine (with the map of the new address), did had a return address: 214 Neely St., postmarked March 8 (CE404-A)."

** The FBI’s Hosty obtained the Neely address on March 11 from a source at the Dallas Post Office.**

"10  Coz-I-Eight Apartments 1306 North Beckley; 604 Elsbeth; 214 West Neely; 621 North Marsalis (the Bledsoe rooming house); 1026 North Beckley. see The Cozy Eight Apartments (R.F. Gallagher, The Fourth Decade, Volume 5 Number 1). During a March 3, 1964 FBI-led tour through the neighborhood, Marina Oswald had the rooming house at 1026 North Beckley pointed out at her request. She stated “she had often seen this house because it was situated near a bus stop which she and her husband had used” (CE1838). Lake Cliff Park, mentioned in Marina’s testimony several times, also by Ruth Paine, is within walking distance of these addresses. Oswald’s denouement on 11/22/63, from the North Beckley rooming house to the Texas Theater, played out, for him, on very familiar turf."

Hmmm,
Why would the Oswald's use the bus stop in front of Beckley rooming house???
Its not convenient to any of the addresses they occupied. Especially with children in tow.

And is there any doubt a postal informant informed on Oswald when he opens that new po box.
And any delay informing police is bogus. Again it is not necessarily Holmes dialing police immediately.
Cheers, Ed

Not a month earlier, in February, 1964, Marina had told the WC that,


"Mr. RANKIN. Did you ever observe your husband taking the rifle away from the apartment on Neely Street?
Mrs. OSWALD. Now, I think that he probably did sometimes, but I never did see it. You must understand that sometimes I would be in the kitchen and he would be in his room downstairs, and he would say bye-bye, I will be hack soon, and he may have taken it. He probably did. Perhaps he purely waited for an occasion when he could take it away without my seeing it."

For a number of reasons, I believe that it was Marina who ordered the rifle.

oswald never owned a rifle or the .38 and his PO box was in another building. These kind of things were exposed like a decade ago. i dont understand wh they are still discussed. Anyone who sticks to the Oswald did it theory either has suffered traumatic brain injury, rode the short bus to school, is too lazy to open a book, or works for the CIA like McAdams and Mary & Buck Ferrell. 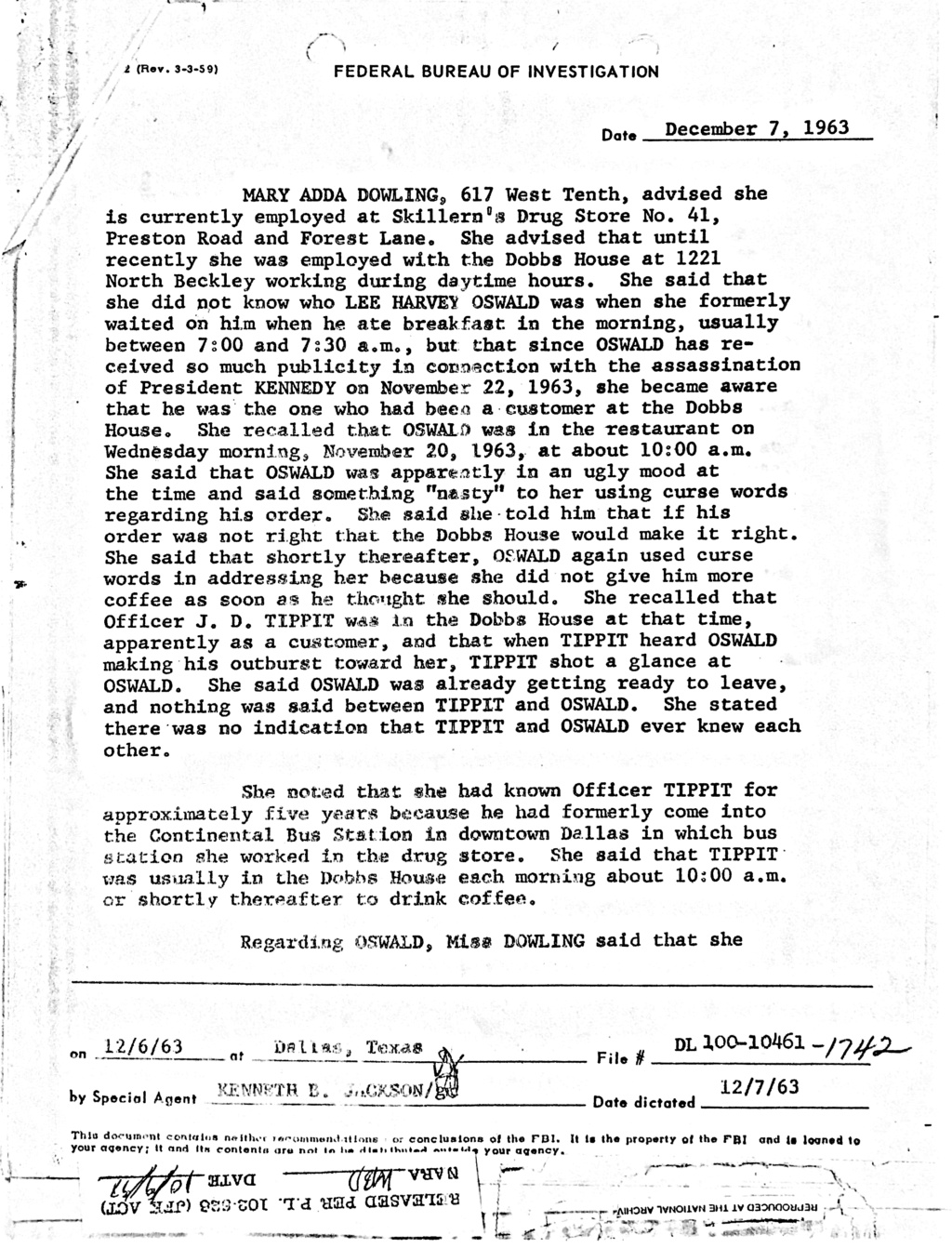 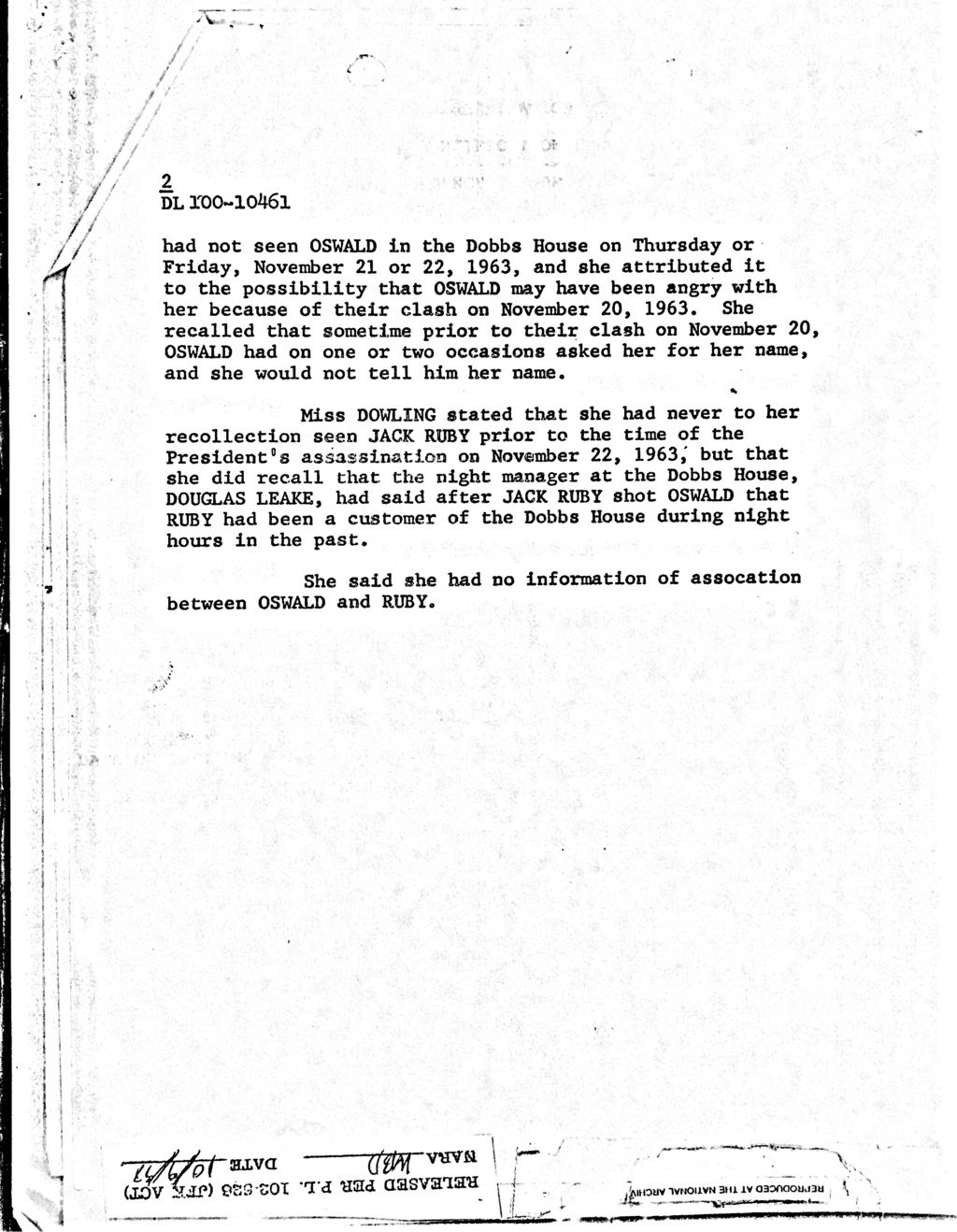 Dowling proved it was not Lee.
FBI asked Roy Truly and Roy said Lee was at work Wednesday November 20 at 10am.

Dowling may have been sympathetic to Tippit as a regular, known customer, and allowed herself to finger Lee when it was not and could not be Lee cursing a stack of pancakes. 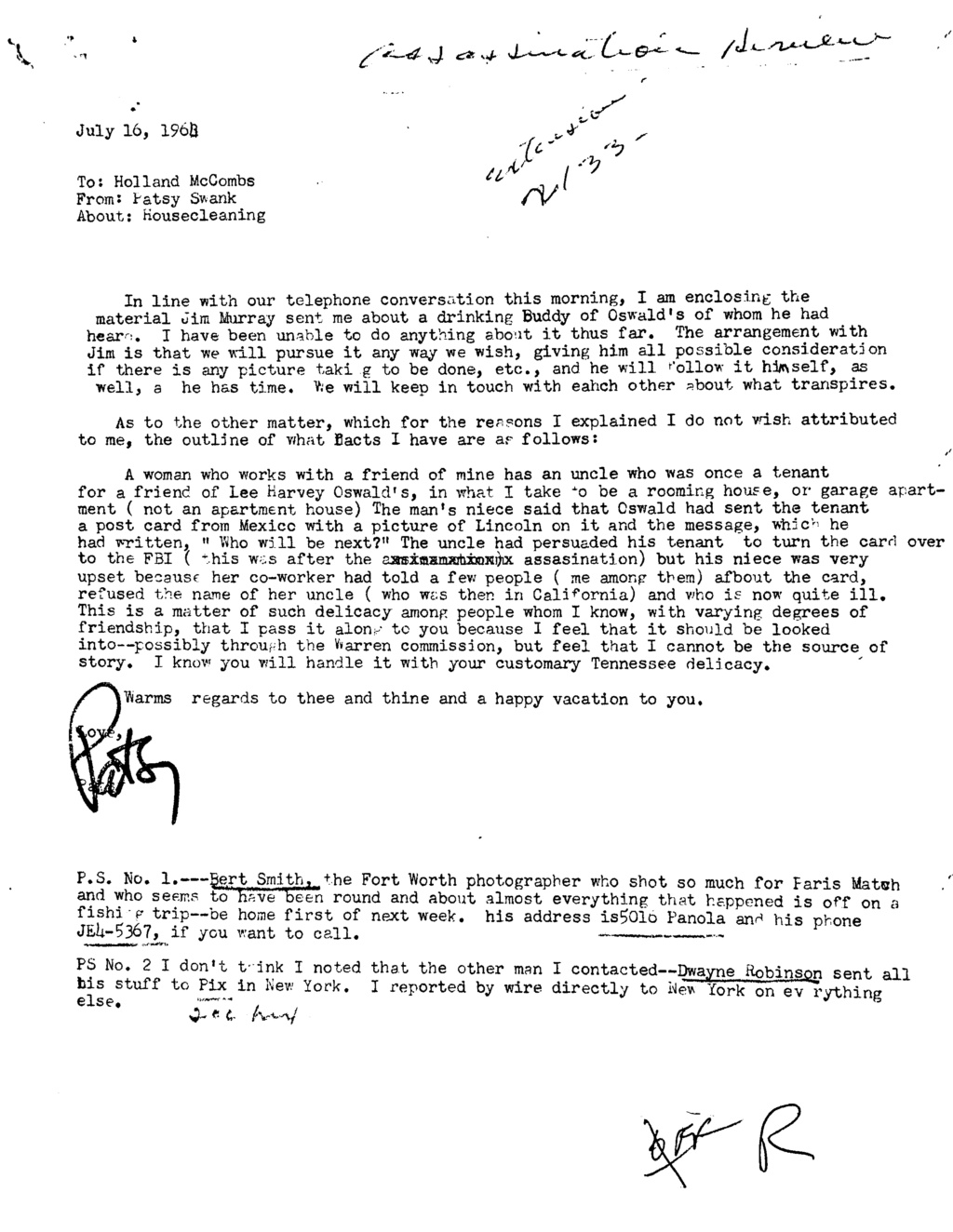 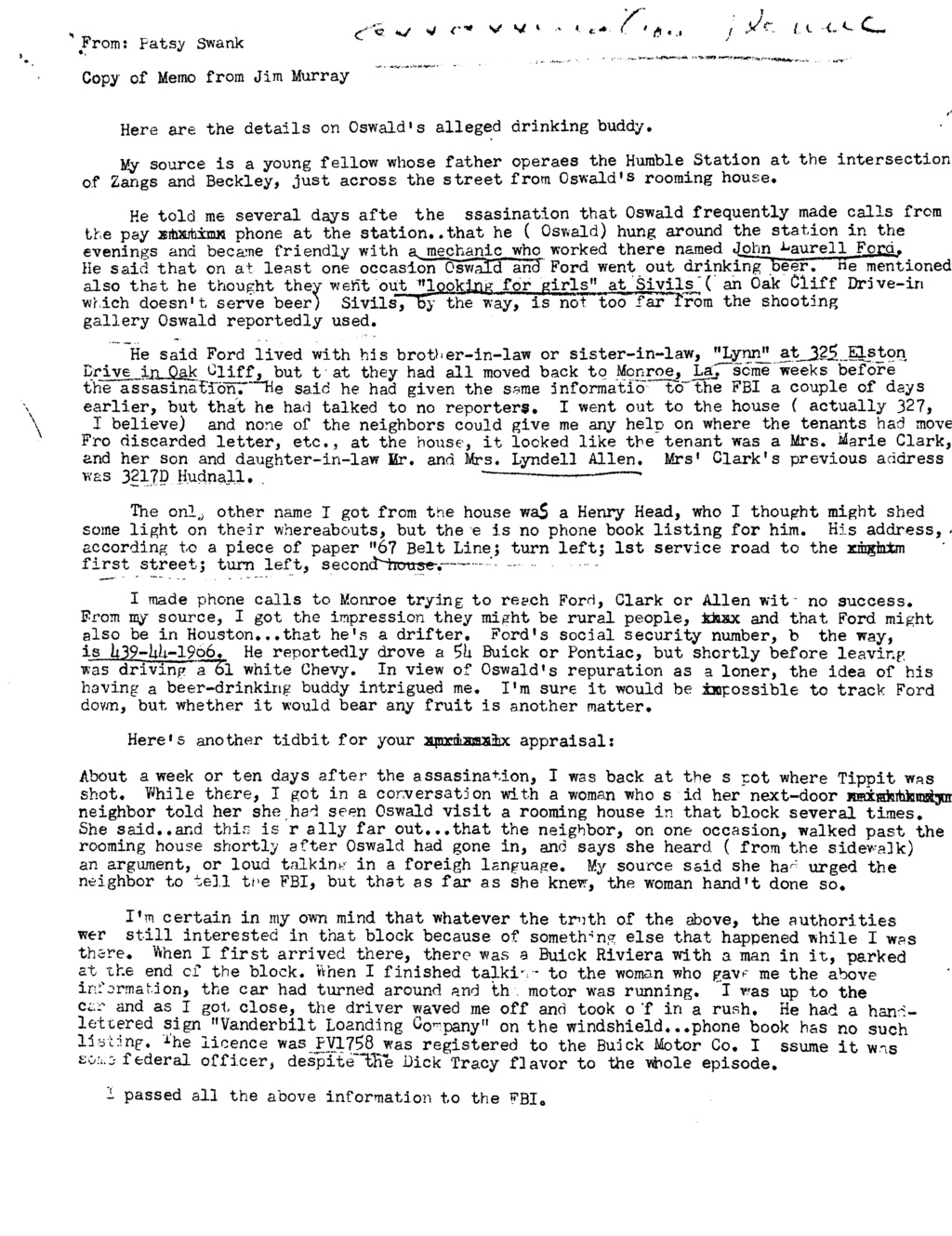 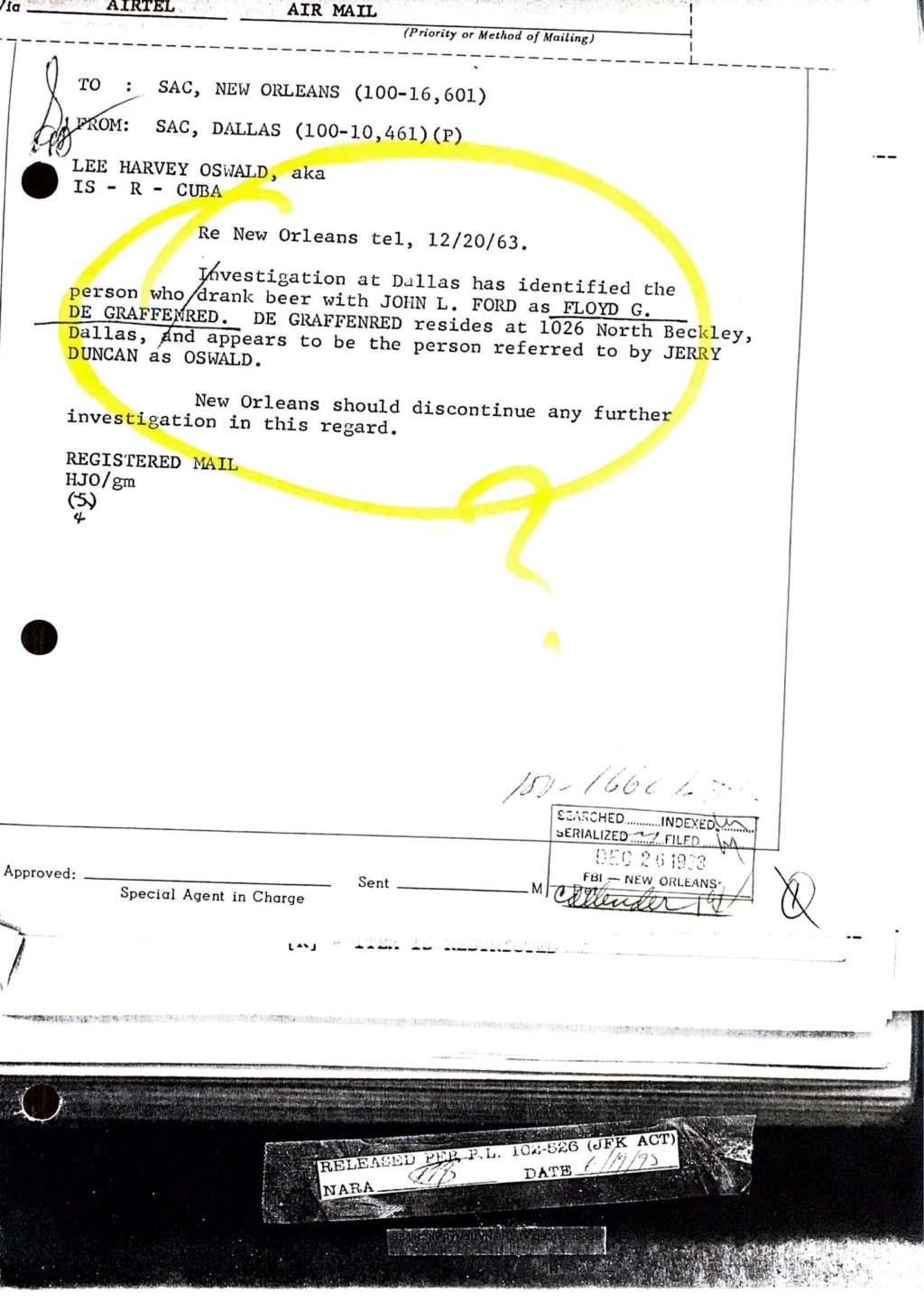 Nice doc Bart!
Slow Steve Roe wouldn't know how to read it though... do you have a braille version handy for him?
Thanks, Ed