This thread deserves a bump!

69 MB of paperwork on Ruth and Michael Paine.

Awesome reread of this just paints her in an appropriately bad light.
Stan knocked her the f out of heaven, well done showing her bear false witness.

Thanks Bart for the docs, they are gold.
Ed

Later this month Ruth will be in Dallas giving a speech at the Texas Theater. As part of some conference or something.
_________________
Out With Bill Shelley In Front.

It would be something if we could have a ROKC member there to fire some questions. I don't think we have anyone close enough though.

Thank you Stan
$20.00 not bad
Interesting
And yes if anyone were to go to that Then that would be amazing

Perfect, arrest her there for conspiracy to commit murder.
It'd be nice piece of irony, but Dallas still has not grown any balls ...
Cheers, Ed

I guess they will only ask her easy questions there. Unlike ROKC which asks tough questions.
_________________
Out With Bill Shelley In Front. 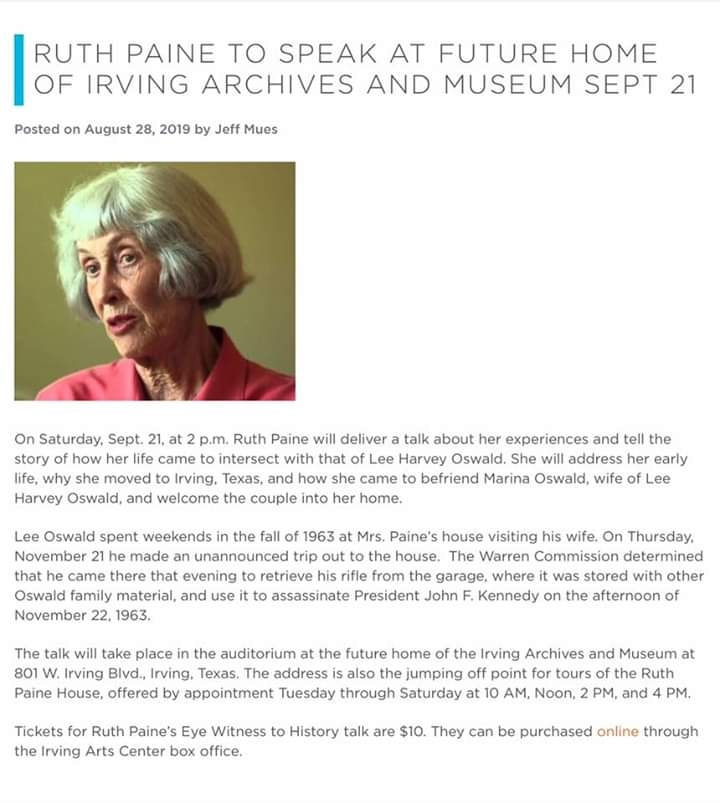 Thx Vinny, Id pay 10 bucks for a good laugh whilst she explains herself.
Cheers, Ed


Ruth Hyde Paine is excited to be flying for the first time from Santa Rosa to Dallas.
Not having to get herself to the Oakland Airport or SFO will simplify the trip the 87-year-old will take Friday to a place that’s been painful for her since Nov. 22, 1963.
You may recall that the resident of Santa Rosa’s Friends House retirement community has an extraordinary linkage to the assassination of President John F. Kennedy.

As a young mother and Quaker living in the Dallas suburb of Irving, she befriended a Russian-speaking newcomer to America named Marina Nikolayevna Oswald. The immigrant’s husband was Lee Harvey Oswald.
It was Ruth Paine who told Lee Oswald of a seasonal job opening she’d heard of at the Texas School Book Depository in Dallas. Paine took Oswald’s wife and two children into her home, and she put up with having Oswald stay there each weekend and then return to his job and boarding-house room in Dallas.

“I didn’t want him to be there all the time,” she told me as she prepared for her journey back to Dallas, “but I did say he could come on weekends to see his wife and children.”

Oswald carpooled to Paine’s home in Irving after work each Friday. But he appeared unannounced on Thursday, Nov. 21, 1963, and secretly removed something from Paine’s garage before returning to Dallas early the next morning.
Paine counts as the shock of her life the moment she learned that Oswald had hidden in her garage the rifle he used at 12:30  p.m. on Nov 22 to shoot the president from a window on the book storehouse’s sixth floor.
On Sunday, Paine will be at Dallas’ landmark Texas Theatre, where Audie Murphy’s “War Is Hell” was showing when Oswald ducked in after he killed Kennedy and then Dallas policeman J.D. Tippit. As police rushed Oswald inside the historic theater, he raised the pistol he’d removed from his boarding room but failed to get off a shot.
_____
PAINE IS SET to be at the Texas Theatre at 6 p.m. Sunday for the premiere of a documentary, “Truth is the Only Client: The Official Investigation of the Murder of John F. Kennedy.”
The film focuses on surviving attorney/investigators for the Warren Commission, which conducted a yearlong probe into the shooting. It found that Oswald killed JFK and he acted alone, a conclusion since disputed by a whole array of alternate and conspiracy scenarios.
Also featured in the documentary are surviving witnesses to the Warren Commission. Ruth Paine’s testimony was key to the inquiry.
She’s scheduled to answer questions at the theater alongside former Warren Commission attorneys Howard Willens, Burt Griffin and David Slawson, and also Bernie Weismann, who placed in the Dallas Morning News on the morning of the assassination a John Birch Society-affiliated ad critical of Kennedy.
_____
THE DAY BEFORE the showing and panel discussion in Dallas, Ruth Paine will be back in her former hometown of Irving, a suburb of Dallas, on Saturday afternoon. In a talk at the Irving public library, she’ll recount her friendship with Marina Oswald, and how they spoke Russian together, and all that happened to persuade her that Lee Harvey Oswald decided shortly before JFK’s visit to Dallas that he wanted to retrieve his Italian Mannlicher-Carcano rifle from her garage.


If time allows, she may visit her former home, now the city of Irving’s Ruth Paine House. A museum, it carries visitors back to the morning that Lee Harvey Oswald arose early and carried from the garage a long, narrow package that he told his ride-share buddy contained curtain rods.
_____
GIVEN THE CHANCE, Paine would ask this of everyone who doubts that Oswald killed President Kennedy, or that he acted alone:
What do you make of the murder attempt in Dallas seven months earlier on former Army Major Gen. Edwin “Ted” Walker?
A decorated combat veteran and ardent conservative, Walker was seated at his desk the night of April 10, 1963, when a bullet pierced a window and passed within about an inch of his head.
The attempt on Walker’s life went unsolved until after the Kennedy assassination and the arrest and murder, by Jack Ruby, of Lee Harvey Oswald.
An investigation concluded that it was Oswald who’d fired at Walker. The evidence included a bombshell involving Ruth Paine. She had at her home in Irving a book left behind by Marina Oswald, who never returned to the house after Nov. 22, 1963. Thinking that Marina Oswald might like to have the book, Paine asked a police officer to take it to her.
A short while later, Paine had company.

“The Secret Service came and showed me this note,” she recalled. The agents wanted to know why she sent it to Marina Oswald.

She told them she’d never seen the note and didn’t know it was inside the book she’d sent to her friend.
Paine agrees with the subsequent conclusion by investigators that it was a note that Lee Harvey Oswald left for his wife before he’d gone off to try to kill Ted Walker. The note instructed Marina Oswald on what to do if Lee Oswald did not return from his mission.
For the past 56 years, Paine has contended that the note proves that the killing of JFK was not Oswald’s first attempt at high-profile murder. For the Santa Rosan, the note dissolves any doubt that Oswald was a lone assassin in search of prey.
“He wanted to kill somebody,” she told me, “and he saw an opportunity.”
________
PAINE IS HERSELF the subject of allegations of conspiracy. There is a line of thought that in 1963 she was a CIA operative who set up Lee Harvey Oswald.
She dismisses the accusations as not only false but ridiculous.
Interviews and public appearances that take her back to Kennedy’s murder are not pleasing to her. “There’s a lot of grief in it,” she said.
She has said she hasn’t excused herself from the issue but continues to argue her view because she says there’s so much false information that she feels obligated to help to dismiss.
Fundamentally, to return to Dallas and Irving is not what she regards as a good time. But as the trip approached, she was looking forward to starting off at Sonoma County’s airport.
_________________
Out With Bill Shelley In Front.

She used to keep a low profile but now she has started giving speeches, interviews etc. I wonder if she has a book coming out or something.
_________________
Out With Bill Shelley In Front.

Vinny wrote:She used to keep a low profile but now she has started giving speeches, interviews etc. I wonder if she has a book coming out or something.

At this late date, those still around believe they are untouchable.

Was offered an early look at the film but the producer reneged.

He got an early copy of Prayerman from Stan Dane and never said anything.

Yes Kelly did not review Stan's book even though he received a free copy. Ironically it was his thread Oswald Leaving TSBD that formed the basis for the book.
_________________
Out With Bill Shelley In Front.