This man appears to be wholly devoid of any imaginative facilities. His percepts are predominantly the most common. His range of interest and achievements is quite limited, seen in his very narrow associational content.

He takes little note of any rare and unusual stimili in his environment. His mental functioning is highly stereotyped. In conformity, he is within the limits of the average in that his thinking corresponds with that of the community at large. However, he proceeds ocassionally with alogical reactions.

His grip on reality is below the average. Errors in judgment may be expected. On two ocassions he resorted to edging while handling the cards. This is a very unhealthy sign.

Only a single overt expression of feeling is revealed. This, however, is at
the stable level and gives a slight indication of warm social contact.

JD is a good worker, honest, dependable and capable. I have known the boy for ten years and have found him a very likeable boy. JD has a good record in the army. He was a paratrooper in the 82nd Airborne Division and made numerous jumps in Europe. JD is a little nervous still and is startled by any loud, unusual noise. JD and Marie have been married for four years and they get along very well together. They have the usual family arguments, but nothing serious. JD has a good sense of humor and likes to be friendly to people. He has a bit of a temper but never lets it get out of hand. I have seen JD drink some but it was before he was married. He doesn't drink at all now.
------------------------------------------

The 17th Airborne was one of 3 Airborne Divisions which took part in Operation Varsity - a joint British - US operation aimed at dropping those men inside the German border. This was the 17th's first look at any type of action.

But the results of the Rorschach Test are far more troubling - especially in view of some of the material Myers gathered for Tippit's bio.

His range of interest and achievements is quite limited

He takes little note of any rare and unusual stimili in his environment.

His mental functioning is highly stereotyped

he proceeds ocassionally with alogical reactions

His grip on reality is below the average

Errors in judgment may be expected

On two ocassions he resorted to edging while handling the cards. This is a very unhealthy sign

An unhealthy sign, indeed. According to Symbolic analysis cross-culturally: the Rorschach test By George A. De Vos, L. Bryce Boyer and Orin Borders, p277, "edging" the cards is a "turning of the surface of the card almost horizontal to the line of vision [and] has been clinically reported as quite a rare occurrence, found almost solely among psychotics

There were at least two major traumatic events in Tippit's life prior to joining the DPD.

The second was his war experience. The first was the divorce of his parents - which Myers does cover - but without going into the reason/s for it or the effect on the children. What can be said is that divorce among those living in rural townships in the 1940s would have been all but unheard of, and one can only imagine the types of reasons which may precipitate such a decision in those tight-knit, backward and highly religious communities.

Neither the Rorschach Test nor the statement of his father-in-law from Tippit's personnel file is mentioned in Myers' sympathetic portrait. In fact, you have to wonder if Myers is even talking about the same person!

To demonstrate, let's look at two incidents Myers does mention.

In the first, the story, as described by Myers, goes like this: September 2, 1956: Tippit and partner Dale Hankins stop at Club-80 on a routine check for drunks. They checked the bar and were about to leave when they noticed "an intoxicated man acting suspicious" in one of the booths. JD thought the man looked like someone in a Colorado wanted poster. The two walked over and asked him to accompany them outside, but as the man slid out of his seat, he drew a semi-automatic pistol, pointed it at JD's head and told him to "stick 'em up!" - then pulled the trigger, but the gun did not fire as he had forgotten to remove the safety. JD and partner then immediately shot him 7 times, killing him.

So, Tippit, who according to a psychiatrist, would take little note of anything out of the ordinary in his immediate surroundings, would be prone to make decisions outside of the bounds of logic, had a below-average grip on reality, and could be expected to make errors in judgment, nevertheless, was able to tell someone was acting suspiciously who was merely sitting in a booth of a club and moreover, recognized the person as someone on an interstate wanted poster. As luck would have it, the dead man apparently was from Denver, according to the newspaper clip Myers published (and he therefore probably was the man on the wanted poster!)

The other aspect of this is the similarity to Oswald's arrest, with Oswald allegedly drawing a pistol and attempting to shoot his captor. There is little doubt that Oswald would also have been shot there and then had he not called out within earshot of witnesses, that he was not resisting arrest.

In both the Tippit club incident and Oswald's arrest, it looks more like a Dallas Police MO for getting away with murder than an arrest gone pear-shaped. Ironically, Tippit was given a Meritorious Award for his actions that night, as well as a commendation for "outstanding judgment and quick thinking".

The second incident was an anecdote related to Myers by Murray Jackson. He told Myers that one afternoon while out patrolling in the squad car, JD told Murray to pull over around the corner. Murray complied and Tippit got out and walked toward a man standing on the porch of a house. Murray followed, not understanding what this was about. Murray simply finishes the story by saying, "it ended up that the young man had a gun and we arrested him and put him in jail." The point of the story appears to be that Tippit was sharp as a tack, having spotted this guy "doing something" which Murray had missed altogether. What he was "doing" is anyone's guess - but simply carrying a weapon alone would not have got him arrested and thrown in jail.

Will the real JD Tippit please stand up? The one described in his personnel file is the complete antithesis of the one Myers has dedicated a website to!

And on the subject of Myer's website, he needs a good whack across the ear for blocking the ability to copy anything from those pages to protect copyright. Maybe after he gets the needed whack, someone could then explain the concept of "fair usage" to him.
_________________
Australians don't mind criminals: It's successful bullshit artists we despise.
Lachie Hulme
-----------------------------
The Cold War ran on bullshit.
Me

If you want to copy and paste from Myers' website don't use the mouse, Greg. You can use your EDIT function in the Internet bar at the top of the screen, select all, copy, and it will let you paste into another programme such as Word.

Anyone, in 2011, who believes Oswald shot Tippit is either making money off it or is mentally impaired.

thanks for the tech tip! But does this mean my advocacy of a clip across Myers' ear-hole was an overreaction?

Almost none of what Myers claimed about the 1956 shooting of Leonard Garland by officers Tippit an Hankins conclusively matches what is in the record.


In September of 1956, J.D. Tippit and his partner Dale Hankins shot and killed Leonard Garland. Garland had worked for a short time at a Dallas auto dealer and was wanted by the FBI. He was also wanted for Grand Larceny in Las Vegas.

Does anyone have any other background on Garland as I have not been able to unearth any?

Any help would be appreciated.

I cannot find anything related to Leonard Garland and Las Vegas.

It is not possible to determine if the routine complaint Tippit and Hankins responded to at Club 80 was a disturbance by extremely drunk Leonard Garland or something else that actually brought the officers into the Club. (From maryferrell link, below.)

It is clear that the FBI was not seeking Garland before 1957, IOW, some months after his death, unless it was related to James's reference to a Las Vegas crime investigation.:
http://www.maryferrell.org/mffweb/archive/viewer/showDoc.do?docId=10096&relPageId=125

Garland is buried in the state in which he was born, Arkansas.:
http://www.findagrave.com/cgi-bin/fg.cgi?page=gr&GRid=66566613

In a post on the "OswaldsMother" blog, George observed that the shooting of Leonard Garland was not investigated by the DPD.

I can add that no autopsy was performed before Garland's body was shipped to Clarksville, Arkanasas on  6 Sept., 1956.
The Dallas authorities recorded his birth year as 1923 but birth records indicate it was 1922
Garland was from a large family and the brother closest in age to him is buried here.:
http://www.findagrave.com/cgi-bin/fg.cgi?page=gr&GRid=99604866
(Exploring the "man exacts revenge for the death of his kid brother," angle, as no one else has done it.)

There were at least one even older and two much younger brothers.

Garland was employed in Dallas by Morris Robinson, a former boxer. Robinson is the boxer in this photo.: 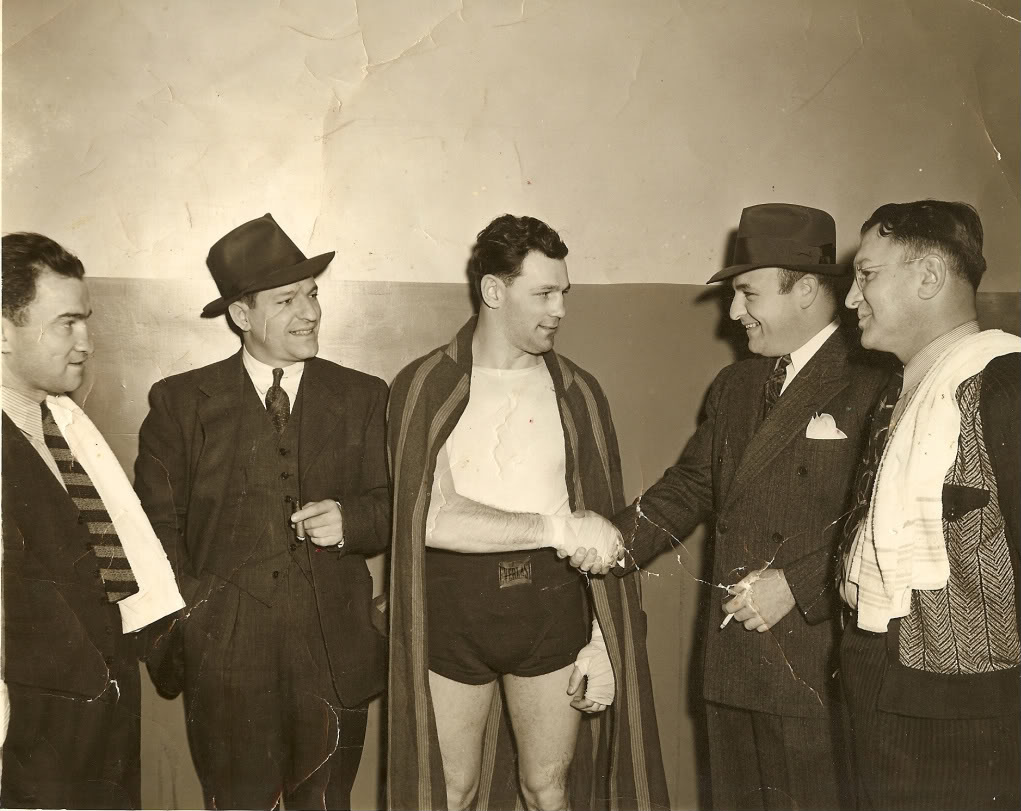 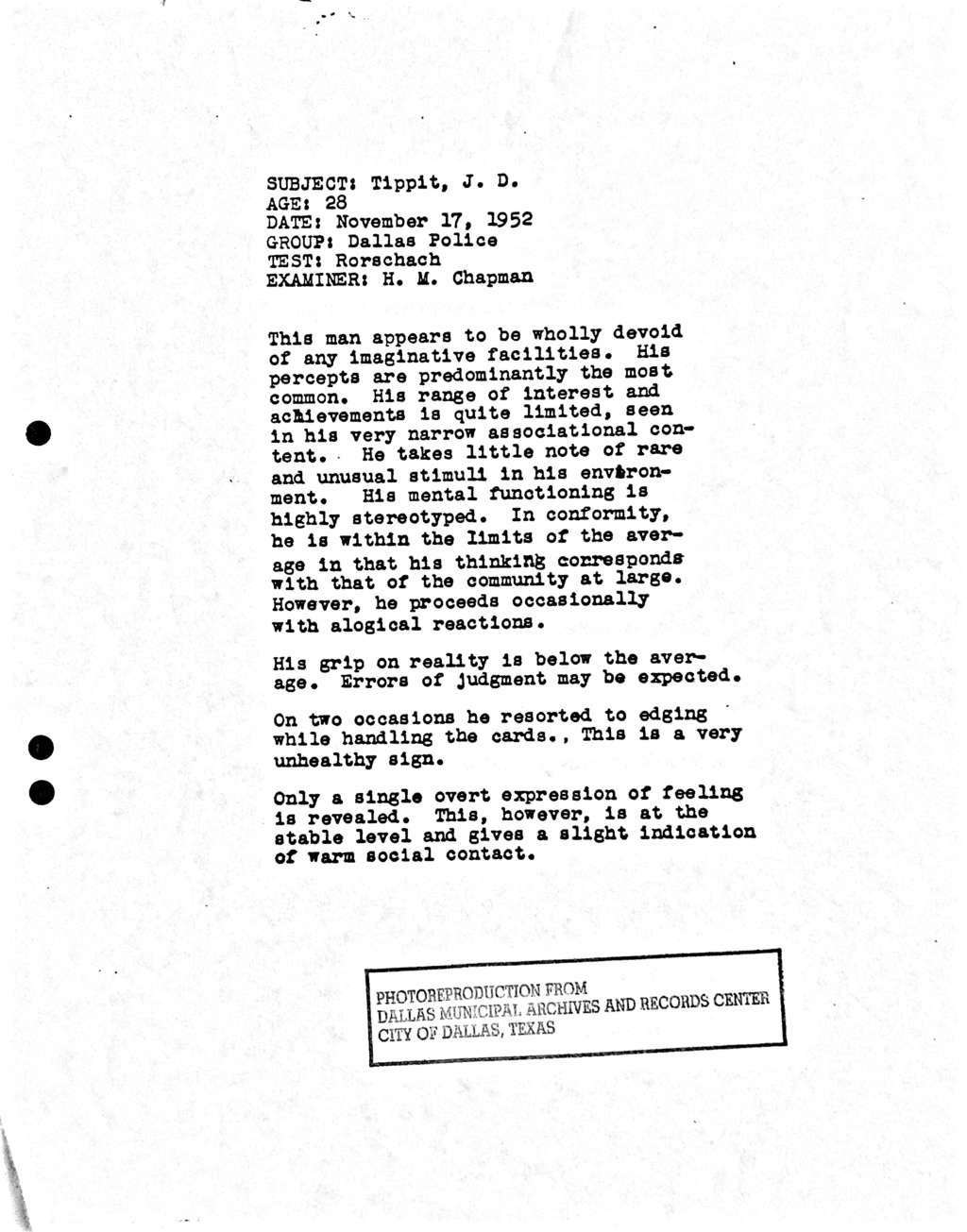 Tippit certainly would not be chosen by the plotters to be a part of the conspiracy. He does not seem to have been intelligent enough for it. Any claims of Tippit being a shooter from the knoll can be ruled out.
_________________
Out With Bill Shelley In Front.

I agree Vinny, looking at some of the unbiased material on his background it is a reasonable assumption to rule him out as having been any part of the assassination plot or frame. Bart's paperwork here clearly demonstrates that he was not likely to have pulled over a stranger or anyone for that matter merely walking the streets.