While reading on William Greer on spartacus.schoolnet.co.uk, I found following statement, obviously, from book of JVB:

Lee (Harvey Oswald) told me that the driver’s habits (William Greer) had been studied, and a shot going off would cause him to brake, which would slow the vehicle down. This was desired because even this cabal feared Aristotle Onassis, who would send killers out to track down anyone who killed Jackie Kennedy, or so the rumor went – and besides, everybody liked Jackie and orders were out not to hit her. It was to spare Jackie that some very expert marksmen missed or delayed their shots that day in Dealey Plaza: she was in their line of sight a great deal of the time, according to David Ferrie, who got the report from Marcello's henchmen as soon as he arrived in the Houston area.

Well, I think it is impossible. Conspirators, whoever they were, couldn't have any materials on behaviour of certain SS agents under stress situation, since I believe the very SS did no perform such tests and studies (and thus failed a lot during November 22).

I find such claims from JVB indicates that her story is not 100% truth.

steely_dan wrote:Brian finds himself unable to agree with Barto or Judyth...
Maybe he can start calling himself Dr Watson...drop Jimi...and help find the Ripper.

Oh man, the poor ripper has no hope...

I think we need to start a facebook group...

What worries me is that people might start conflating Barto's work with JVB's nonsense. With JVB latching onto Bart's research it might give people the wrong impression. The last thing that Prayer Man needs is for someone like her to be connected to it. It would pollute the Prayer Man evidence.
_________________
Out With Bill Shelley In Front.

Vinny wrote:What worries me is that people might start conflating Barto's work with JVB's nonsense. With JVB latching onto Bart's research it might give people the wrong impression. The last thing that Prayer Man needs is for someone like her to be connected to it. It would pollute the Prayer Man evidence.

Point taken Vinny. Could be her strategy for revenge. Nevertheless, more eyes on PM could mean someone new sees the light. I want to be optimistic here. Maybe she's a stalking horse from Trineday courting Barto! Then again, maybe not.
_________________
Release clear scans. Reveal the truth about Prayer Man. Preserve the history of the assassination of JFK.

Vinny wrote:What worries me is that people might start conflating Barto's work with JVB's nonsense. With JVB latching onto Bart's research it might give people the wrong impression. The last thing that Prayer Man needs is for someone like her to be connected to it. It would pollute the Prayer Man evidence.

Yes, Vinny point taken. That's already happened with doorway man and the PM figure. Those who don't follow this research closely can easily be misinformed with BS by the charlatans.

For those who despise the Pm research they would love nothing better to lump that work in with the kooky Doorman stuff or anything else that's from kooksville.
_________________
I'm just a patsy!

Judyth is back with more of her fairy tales. She posted this on Facebook.

My last task for the Project, the BLOOD TEST, before Dr. Ochsner forced me to return to Florida...
Upon reaching the mental hospital’s main gate, I saw the Aide who had been with Lee at Clinton waiting for us. The timing of our arrival had been planned to coincide with the hospital’s shift change when lots of cars were coming and going through the gates. We were taken behind the huge white main building, where we were in a large semi-paved area.
There, we took a rough service elevator to the second story, into a fancy area of the hospital. Only important persons were kept in this upscale area of the building, sometimes to dry out from an alcoholic binge. Obviously, our prisoner was being given special treatment. Once Lee knew where I was going to be, he went on to the personnel office to provide an excuse for his presence at the hospital. Meanwhile, I asked a male nurse seated at a little table if I could interview the “client.” I was curtly told that he was in isolation and that nobody was allowed to see him. This angered me, but like it or not, I had work to do. In the clinic area, everything was already laid out for me.
I checked the blood-work and data while using a centrifuge to spin down the freshly-drawn blood samples to soft, dark pellets sitting in their plasma. I also inspected slides and blood counts already prepared for me. My additional task was to look for particular cancer cells. A few were found — an excellent sign that the bioweapon worked. The original cancer cells had been tagged with a radioactive tracer. If radiation was detected in the pellets, the volunteer was surely doomed. I checked radiation levels with my specially-sensitized Geiger counter, and there was trace. So it seemed everything was a ‘go.’ I had agreed to do this disgusting work because if the cancer “took” I could insist that no more prisoners were needed.
If it failed, I planned to recommend dropping the whole idea.  My goal was to stop the testing of any more prisoners, period.
The microscope work and centrifuging finally complete, I packed it all into the cooler for transport, with fresh ice.  Next, I insisted on observing the prisoner’s current condition to see how he was physically reacting. Lee and I had also discussed that we needed to match notes on the person I saw with the person he had seen. If they were different patients, that was important. So I had prepared myself to look and remember the face I saw.
I was so persistent that the male nurse reluctantly took me to the door of the prisoner’s room.  However, I was not to be allowed inside. The room was barred, but basically clean.  Several storage boxes sat on the floor on the left-hand side of the room as I viewed it, and some flowers sat on a stand.
The patient was tied to the bed, thrashing around in an obvious fever.
It was very sad. I felt sorry for the part I had played in his sufferings. I forced myself to look pleased with his status. Told that “a gentleman” was waiting for me downstairs, I was allowed to descend the stairs and leave the front way. We had spent about forty-five minutes at the hospital. Once back in the car, Lee and I compared notes. When I said I was almost sure there was more than one “volunteer” Lee asked me to describe the patient to him. Lee then pointed out that his hairline and nose was different from the patient he had seen injected. Between Lee’s comments and the blood samples, I believed more than one “volunteer” had been injected to test the effectiveness of the bioweapon.
As Lee drove, suddenly we could hear a hissing sound from under the hood, so Lee pulled over to inspect the engine. There he found a pinhole leak at the connector end of one of the radiator hoses. We needed to improvise some “field dressing” to fix it.  I retrieved a rubber tourniquet from the cooler. Lee said that would help, but we still needed something to hold it in place, so I stripped off my nylon stockings and handed them to him.
_________________
Out With Bill Shelley In Front.

Utterly  repulsive.  Judyth Baker is nothing but a  con artist. A fake medium repackaged  in the  reupholstered  form of a  wannabe  writer of tawdry  5th rate romantic  fiction.

In fact  she's far worse than  any sham medium. As well as attempting to rewrite  modern American  history to fulfill whatever  grotesque  twisted  psycho pathologies  rattle around inside  her grotesque twisted  snout ( and mind. Juddufkis  conscience  must make your average M C Escher  look like a  smooth,  straight  highway,  heading towards the rising sun, or the  setting  moon) she's  attempting to  con as much money as she can out of ( mostly) elderly  vulnerable  people. Still haunted by the sights they saw that November day.

The  bright  Dallas sunlight  turned  into countless shades of grey.

And not just by the  TV sets, flickering  sadly. Each picture  falling like tears, filling their minds with  scars . Scars that still remain  fresh. Allowing parasites like  Baker to  turn the  gentle remembrance of  old fresh wounds  into  cold hard cash.

Fuck everyone who has ever enabled this disgusting scam artist
_________________
A fez! A fez! My kingdom for a fez!!
The last words of King Richard HARVEY Plantagenet III
Bosworth Field 1485 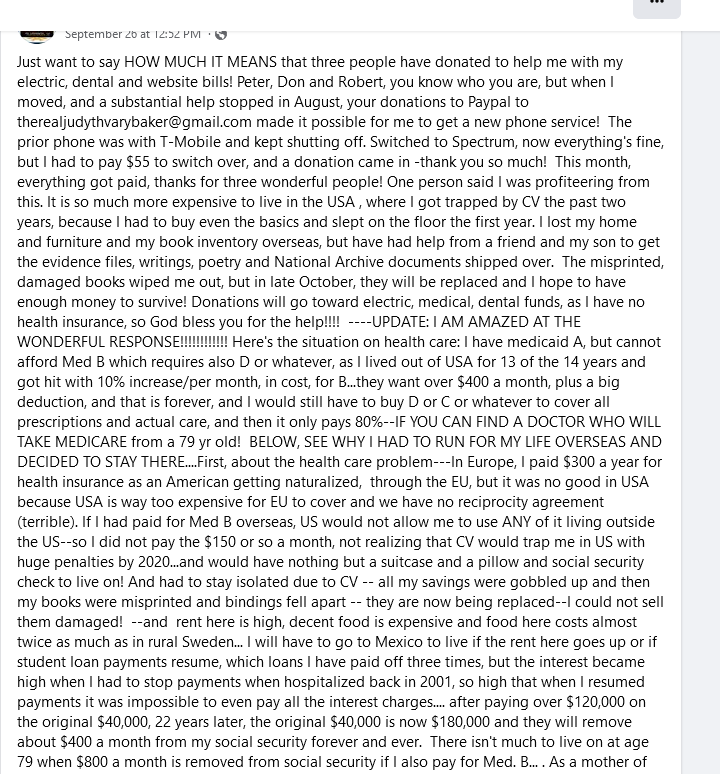 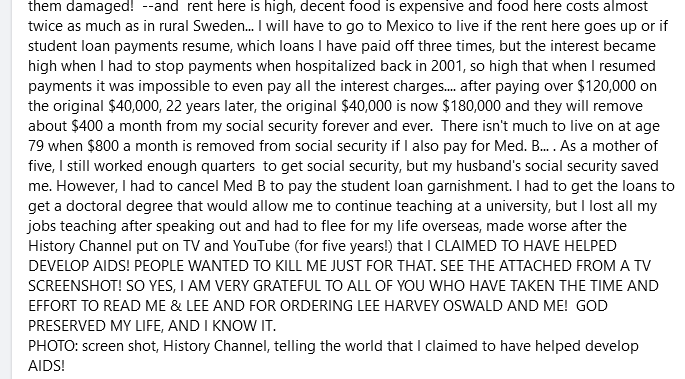 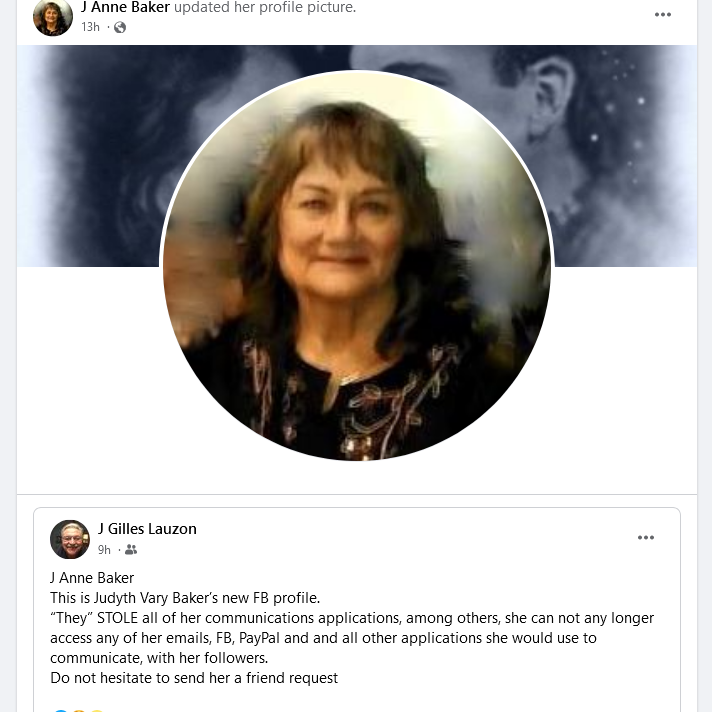 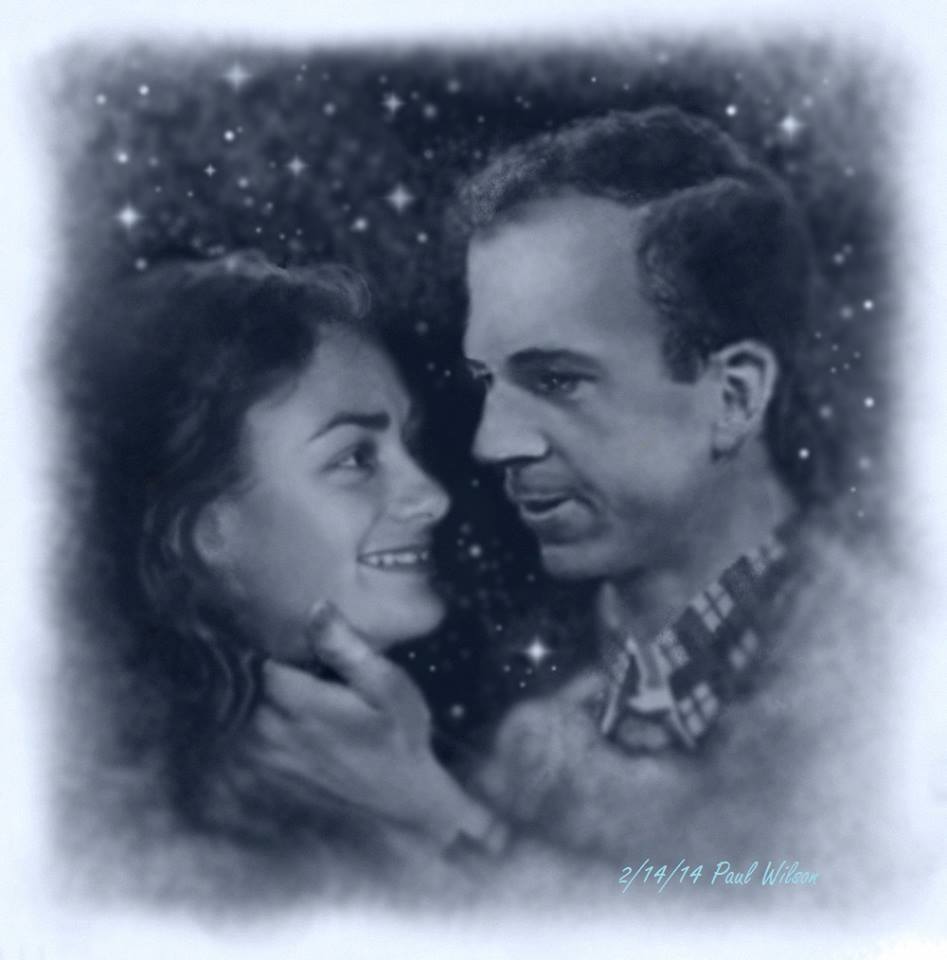