Going to be honest here, I tried to read that. After about six paragraphs, my attention span had completely quit on it and I honestly didn't care about anything.  Oswald's innocence or guilt, Hugh Aynesworth being thrown in there randomly(he may have played a prominent role in that abomination of text I struggled to digest, but seriously that arrogant douche face needs a good eye poking), and even my own mortality, I stopped caring about anything at all. Dude has been doing this since before I was born, and honestly his writing makes me want to inflict pain on myself so I can feel something.

The only things I got out of that were he thinks Oswald is guilty, there was something in there about a jacket, and I found someone that finally dethroned William Faulkner as my least favorite person to decide to do something involving writing. Thanks Dick Myers.

I found the article interesting and the story interesting and credible, of Mrs. Dean, proprietor of Dean's Dairy Way on East Jefferson, witnessing the Tippit killer go in front of her store and then following him around the corner and finding the gray jacket abandoned by him left on a tire rack of the service station next door. The tire rack is hidden from view, in between two buildings' walls, an opportune place to dispose of the jacket without being seen doing so before emerging to view again in the alley behind the buildings. According to the late Mrs. Dean's lifelong story as handed down by her daughters, she had given the jacket to the police. Myers respectfully tells but rejects this story of Mrs. Dean, via her daughters, based on the testimonies and multiple witnesses of police finding the jacket under a car parked behind the service station.

Whereas Myers holds and never questions that the two versions of the find of that jacket are incompatible, I suspect both are correct. Mrs. Dean found the jacket, picked it up and took it back with her into her store until police arrived moments later. Police quickly arrived, and Mrs. Dean turned the jacket over to them and explained which way she had seen the killer run. This presented a problem from the police point of view because a chain of custody was compromised. Officers therefore thanked her and took that jacket, and proceeded to newly "discover" it themselves in a different location nearby--under a car out back. The unusual testimonies of Westbrook and other officers, all with amnesia in which no one could quite remember which officer had first spotted the jacket and conflicting reports as to which officer picked it up--Westbrook? or not Westbrook?--are less than straightforward and suggestive in support of this reconstruction. Only two or three officers would need to know that the jacket had been found before it was found again more properly by police officers. Remember Leavelle's statements to witnesses at the police lineup later that day, "take your time, we need a solid identification, we want to wrap him up real tight on this one". Once police identified who they believed was the culprit, it became an issue of preservation and presentation of evidence in a form suitable for proving it in court. So it was not viewed as framing someone innocent, but of developing evidence in a form that the legal system would find acceptable to convict the guilty.

It is the same principle involved in the parallel relocation of the Oswald wallet from its actual find spot at the scene of Tippit's killing, to being claimed to have been taken from Oswald's person after his arrest. Westbrook as the senior ranking police officer would have had custody of the Oswald wallet at the scene of Tippit's death, consistent with testimony and the TV station WFAA's video. The wallet then went with Westbrook as police soon rushed to the Texas Theatre on Jefferson Blvd where Westbrook was active in directing Oswald's arrest. I believe Westbrook gave the wallet to Bentley who sat next to Oswald, to Oswald's left, in the rear of the cruiser taking Oswald downtown, whereupon Bentley produced the wallet and went through it in the context of asking Oswald his identity, with Bentley later claiming he pulled the wallet out of Oswald's left rear pants pocket. (As a passing comment, Oswald was right-handed; do most right-handed men carry wallets in their left rear hip pocket, as opposed to the right rear hip pocket?) Again, they knew the wallet was Oswald's, but they needed a correct chain-of-custody to present in court. As for how Oswald's wallet would be found at the scene of Tippit's murder, I reject the explanations of planted evidence, that the killer dropped it there, that there were two such wallets, or that it was from an attempt to frame Oswald. It was not planted by police at the scene of Tippit's killing because if had been it would have been reported and claimed there. (And I assume that what Myers sees as photographic differences in the two Oswald wallets of identical style are minor photographic anomalies not indicative of actually distinct items.) No, the difficulty from the police perspective is where that wallet was found (no one has yet suggested this to my knowledge): not dropped on the ground, not in Tippit's hand, not handed to officers by an unnamed outsider, but rather found in the slain Tippit's pocket. The find of Oswald's genuine wallet in Tippit's pocket is not evidence Oswald was at the scene of Tippit's killing, but rather that Oswald had some relationship with Tippit in which Oswald had recently given him his wallet (Oswald divesting himself of wallet identification may be consistent with Oswald's refusal to answer repeated police questions at first as to what was his name--sensible if Oswald had no wallet on his person; less-sensible if Oswald did have his wallet on his person). There are three witnessed claims of Oswald and Tippit being in the same place at the same time in the preceding 24 hours, only one of which need be reconstructed as an occasion of a possible voluntary transfer by Oswald of his wallet to Tippit for safekeeping, with Tippit working in some undercover role. (The three: Thu AM Nov 21 at the Dobbs House restaurant, witnessed; Thu AM at the Top Ten record store, hearsay; and 1 pm Fri Nov 22 the police cruiser which may have been Tippit's car number "10" reported seen by blind-in-one-eye housekeeper Earlene Roberts in front of Oswald's rooming house during the only 3-4 minutes that day when Oswald was there.) I do not think Oswald was Tippit's killer, though to explain why would go too far afield here.

The point is that the acceptance of the Mrs. Dean jacket story as handed down by her daughters--in a reconstruction which at the same time does NOT deny what is known of the police finding of the gray jacket dropped by the Tippit killer in a different nearby location--is comparable with the parallel handling by police of the Oswald wallet. In both cases Dallas police were, from their point of view, not fabricating evidence to convict someone innocent, but attempting to present genuine evidence they were finding in a form that would result in a richly-deserved conviction in court of the killer of their fallen comrade.

And so I found Myers' article of interest, and appreciate both Mrs. Dean's daughters for coming forward with the account, and Myers for writing it, even while I offer this differing interpretation or assessment of the Mrs. Dean story than Myers.

The dawn of a new rabbit hole. Dale Myers invents his own brand of hearsay and up pops the latest in new and improved hearsay. Slather it over the top of the old hearsay and eat it for lunch.

I purchased Myers book and using the actual record I set about trying to create a timeline for his claims - to either validate his version or not. In trying to to confirm his timeline I quickly discovered almost the entire book (With Malice) is a fabrication , at least according to all the reports, Affidavits and witness statements sworn not long after the event.
It proved  - at least to me that Myer's book is nothing more than a fictional fantasy.

@Mick_Purdy wrote:I purchased Myers book and using the actual record I set about trying to create a timeline for his claims - to either validate his version or not. In trying to to confirm his timeline I quickly discovered almost the entire book (With Malice) is a fabrication , at least according to all the reports, Affidavits and witness statements sworn not long after the event.
It proved  - at least to me that Myer's book is nothing more than a fictional fantasy.

The record shows that he was less than honest when he put pen to paper.

I believe I posted this before, but it's really hard to take Myers seriously. Pat Speer, among others, did a great job of exposing his bullshit when he created his "award-winning" animation. In other words, he tried mightily to fit a square peg into a round hole.

PS - I know Speers has been ridiculed and not well liked here. Yes, I agree that some of things he writes about regarding the case can be silly and he takes the witness statements, IMO, way too literally. But I do think he did a good job of the above.

And here's one of my all-time favorite photos from the case. Bet Myers never used that reenactment photo as part of his research leading up to the animation: 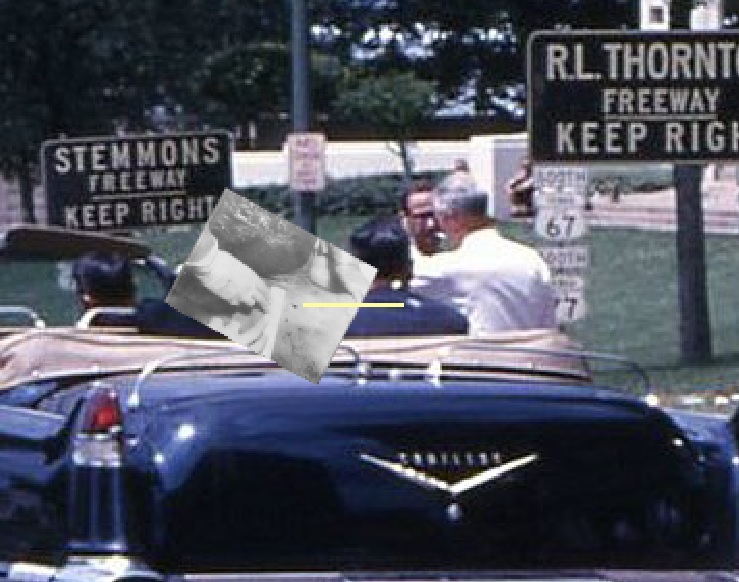 PS - I know Speers has been ridiculed and not well liked here.

Telling me and Lee Farley that we hould be honored and grateful that David Lifton condescended to give us the benefits of his chastisements, about says it all.