Doyle has  fashioned himself a perch over on acjfk..and  from his perch he can splatter at will..In fact acjfk is turning into a basement away from his.....er  basement..Only a couple of months and his threads are already echo chambers......all he needs is a couple of lava lamps and an audience full of life size Grace Slick cardboard cutouts,  a la Rupert Pupkin...not forgetting the shuffling heavily sedated form of  Larrytrotter,  resplendent in his naughtiest  frilliest  French Maids  outfit,  bringing our very own Galileo a never ending supply of spaghetti hoops and Sanibel Gold smoothies...What  am I talking about!! Its not because Brian comes across as an immature petulant little brat, a 60 something who behaves like a spoilt ill  mannered teenager,  and it's not because his boring repetitious  " claims" are utterly ridiculous,  it's not even because we're all either CIA disinformation agents or hapless troll punks who lack the  requisite skill , and who aren't in the  3 percentile  genius level...No, of course  it isn't,  right Brian? It's  because James Gordon ( who moonlights part time as a  James Bond  supervillain, Ernst  Stavro  Blowjob  perhaps,  when  he's not busy  selling  bubble bath and  toilet cleaners, door to door,  to the  divorcees and widows of Dunny On The Titte) , Lauren  Johnson,  Greg , aka The Great Blasphemer himself,  and  Jim DiE  have masterminded a secret  cabal to keep your superior evidence offline,  protecting the  95% who lack the  skill and the detective smarts to recognise your genius...And a slim young casually dressed male with a dark receding hairline,  masquerading as a  portly  grey haired middle aged woman?, let's just say it doesn't get much more geniusy than that...unless we ascend to the rarefied heights,  populated by the  esteemed Professor and his Academician sidekick,  with their dancing penguins and back to front cars....This cabal is so secret in fact it doesn't even know it exists!! So instead of deleting or censoring  they've left the aforementioned superior evidence for all too see!!

Bottom line: Brian is exactly where he wants to be.  Ranting and fulminating from the safety of the  sidelines. Trying to drown out the encroaching silence with self aggrandising  rant after self aggrandising rant. Only  pausing to castigate the booby  trolls and noodnicks who don't have the skill to realise his opinions are even  troofier than the troof  itself. He wants all of the plaudits without doing any actual work. Preferring to lurk in the  shadowlands , free of facts, where speculation and opinions reign supreme.

He's  constructed this elaborate persecution fantasy- cabals of conspiring mods,  troll punks and agent provocateurs-and  he's had to:so he doesn't have to face up to the actual facts. The fact that  his argument has been overwhelmingly  rejected. The fastest  Galileo on the internet, persecuted  by the  unthinking  ill informed  masses sure beats being the poor booby who tried,  and who is still trying,  to pass off a plump diminutive  middle aged grey haired woman as a casually dressed male with dark hair and a visibly receding hairline.

Far from being banned and censored  he has chance after chance to make his argument.  Over and over again. At excruciating  length. Apart from integrity free munchkins like Palamara,  permanently  drunk on ego or hateful  Bible thumpers permanently high on Jesus ( and hefty huffs of turps) or uncatergorisable  critters  like Larrytrotter,  the uncrowned king of Clarification and the delightfully  erudite Tommy Graves, housewifes  favourite,  anyone with eyes to see and a brain to think ( and crucially without an agenda and/ or an axe to grind) can see, just by looking at the fucking image, that the very idea of Prayerman  being a  rotund  300lb grey haired woman is , quite frankly,  laughable.

I guess that's why Brain never posts any actual photos.

I  made the mistake of trying to engage with him rationally. It's  not a mistake I'll be making again.

I was only enabling him.

So its wank splat  By at least a handbags length..

What really gets on my fucking nerves is when petty egos and  pet theories  get in the way of  actual progress. At this stage,  nearly  60 years down the line,  with the  Warren Report/ lone nut lie  becoming ever more  entrenched,  partly because of the  preposterous antics of certain high profile  self proclaimed  " conspiracy  theorists ", the last best  remaining chance is to forget the pointless internecine squabbling and focus on the larger picture , if Prayerman does turn out to be Oswald  then that'll be the  castle walls breached. If it isn't him, so what? What's to lose that hasn't been lost already. Decades ago.

Or else we can all settle back into comfortable torpor,  rousing ourselves occasionally to argue once again about the  fucking  SBT,  or watch as another hustler cum fake witness, or another " expert " with an alphabet soup after their name  publishes yet another book, describing in great detail how best to  reinvent the wheel...Doyle is nothing more than a nuisance,  a very loud, very persistent nuisance ...whereas Baggins is the frontman for a relatively sophisticated  well funded propaganda operation. I don't know what the point of   Operation Harvarossa is , or what  exactly they hope to achieve..whatever it is it most certainly has absolutely fuck all to do with the JFK assassination..and  even less to do with  truth.

P.S. its great to see you posting again Stan..and Steely I should have listened to you. There's no point trying to reason with someone who is absolutely determined to make a fool of himself.
_________________
A fez! A fez! My kingdom for a fez!!
The last words of King Richard HARVEY Plantagenet III
Bosworth Field 1485

Wanker tells me this about Wiegman and PM 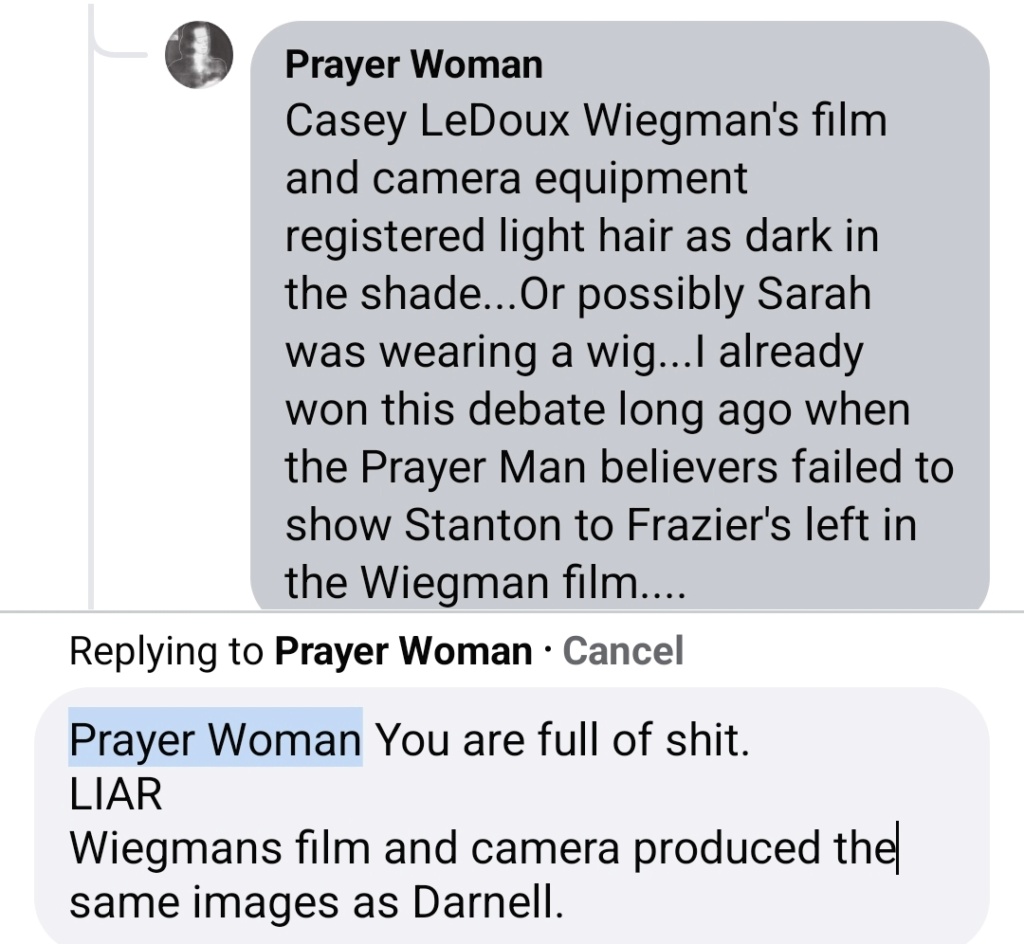 Here this is full version

He seems to be outright lying about Greg. 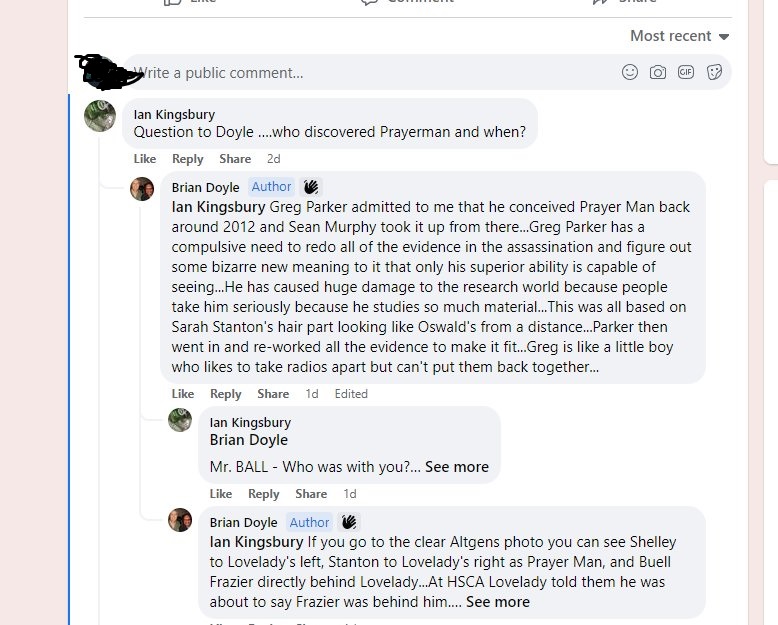 Those posts must have broken every irony meter this side of Timbuktu.

No amount of bluster or psuedoscientific waffle can turn , what's quite clearly ( Oswald or not) a casually dressed male with a dark,  visibly receding hairline into an obese grey haired middle aged woman.

Then there's the small matter of  Mrs  Stanton's  own statement...

And how can anyone use the  Altgens  photo ? Seriously? For fuck sakes at least half the platform is obscured by the secret service agents in the foreground!

That's probably the most infuriatingly frustrating thing about dealing with the hardcore doppelgangers/ everything is fake brigade.

This habitual,  almost pathological shifting of the goalposts.  If a document/ photo contradicts the  fantasy in question,  then they're obviously fake..(Mention  Mrs Stanton's  statement to Brian and he'll start ranting on about how untrustworthy the FBI was...and how it habitually altered witness statements. That may, or may not be true ( to a certain extent) but in the  following sentence he'll be gloating triumphantly about the  FBI documents  that ( in his warped and jaundiced  opinion) support his preferred fantasy scenario..)

But if a document/ photo  supports( however tangentially) or can be tweaked and twisted to ( however superficially) support the chosen fantasy then its transformed into spam..

To be whipped out at every opportunity..as gleefully as Great uncle Bulgaria Butler used to whip out Lil Stonewall...( see Jimbo Baggins. How often has he produced  his " evidence " You can bet your last Hungarian Pengo  if his " evidence " contradicted his fantastical claims,  he'd be squealing  " Fake" louder than a Hobbit  trapped in a  dwarves only gay brothel...)

It's a completely illogical  ahistorical approach. That makes a total mockery of the very concept of research..
One that makes  it impossible to hold any sort of rational discussion with these characters.

For the likes of  Brian and Butler  once they believe something it becomes a fact. When it comes to,  er research,  both labour under the misapprehension that they possess  an immutable  ex cathedra  infallibility...

Because they couldn't give a fuck about the  subject,  or the  actual facts,  or about trying to uncover what actually happened, or perhaps most damaging of all: the effect their antics have on how outsiders perceive this case.
It's all about themselves; and some twisted concept of " winning " a fucking internet argument. Or else its about maintaining the delusion that they possess some sort of unique,  preternatural research ability.

How often does Brian boast about his supposed skill? If you can stomach it,  step over to the 13 Inch Head Forum,  there you'll read Butler's bold proclamation: How, he, John Aloysius Spicy Beef Pot Noodle Butler , has uncovered facts that previously eluded all other researchers..

Brian, Butler  and co have created the perfect self sealing fantasy dimension for themselves. One intimately  linked to their teenage ego and their stunted grossly immature and malformed sense of self..

Unless they wake up and realise that their non expert opinions are no more and no less valid than any other  non expert opinion then they're both condemned to trudge round the same unfulfilling treadmill...condemning any poor soul who happens across their " research " to a nightmare of browbeating or almost cosmic incoherence..
_________________
A fez! A fez! My kingdom for a fez!!
The last words of King Richard HARVEY Plantagenet III
Bosworth Field 1485