Lee Oswald Exoneration Petition - PLEASE SIGN!
Please Sign Petition to get the Magpies back into the NRL
Search
Latest topics
Richard Nagell- A Bad Case of the Blues?Today at 12:57 amalex_wilson
Frazier On Prayer ManYesterday at 2:17 pmSweden_for_Truth
Who Is This Guy?Yesterday at 2:07 pmSweden_for_Truth
Hugh Aynesworth offered to snitch on William Walter for the FBITue 13 Apr 2021, 3:24 ambarto
This is who was behind the assassination....duhTue 13 Apr 2021, 1:35 amJFK_Case
why palmer mcbride was wrongMon 12 Apr 2021, 1:06 ambarto
Back Yard PhotographySun 11 Apr 2021, 6:34 pmbarto
The Rise of Hitler and the Foundations of AntisemitismSat 10 Apr 2021, 8:45 pmalex_wilson
How Jack Ruby's Entry Could Have Been CoordinatedSat 10 Apr 2021, 9:37 amgreg_parker
Navigation
Portal
Index
Memberlist
Profile
FAQ
Search
Galleries
Log in
Social bookmarking

Jeanne DeMohenschildt
"The floor was less germs than her infected teeth, but she was not aware of it. That is that didn't make sense, didn't make sense at all. After all, a pharmacist--it also didn't make any sense to me how could she, came from the country where all the medical help is supposed to be absolutely free."[1]

Dr Harvey Allen
"Examination disclosed that Mrs Oswald's teeth were in very poor condition. He recalled that he examined her together with Dr AF Staples, Head of the Department of Oral Surgery, and they recommended on the first visit that she have her teeth cleaned and a full mouth x-ray survey. He said she reappeared on October 10, 1962 and three extractions were performed. He said he believed Dr Staples gave her a mild sedative to prevent her from having any pain after the extraction. He said the patient returned on October 15, 1962 and two more extractions were performed"[2]

Dr Albert Franklin Staples
"He said he recalled her teeth were in very poor condition. She had many cavities and needed much dental attention. He said he had no personal recollection of giving her a prescription on October 10, 1962, but felt sure that he would have given her a prescription on October 15, 1962 when she had three extractions. He said in such cases it is the usual practice for him to give a prescription of codeine or combination of codeine and aspirin to keep the patient comfortable after such work."[3]

Thanksgiving, 1962
The Oswald clan (minus Marguerite) held what was termed a family reunion at the home of Robert Oswald on Thanksgiving. This was only a few weeks after Marina's dental work. John Pic drove his own car there from his home at Lackland AFB and wrote the mileage down in a notebook he kept for just that purpose. [4] This is usually done in order to claim such trips as work related expenses for tax purposes. Pic and Marina also used this notebook to record a conversation on medical matters, though possibly only remnants of this were kept in the Warren Commission volumes, designated Pic Exhibit 60. Given the possibility this trip was work-related, as well as Pic's background in Red hunting in conjunction with ONI and the FBI on Ellis Island, the discussion with Marina may well have been some type of debrief.

Project Hope
In 1960, Dr Albert Franklin Staples was part of the medical team of Project Hope in Ecuador and Columbia. [5] In 1964, some time after handing over Marina's dental records to the Warren Commission, Dr Staples travelled to West Africa to rejoin Project Hope. [6] The underlying purpose of Project Hope was in Cold War Psychological Operations which had CD Jackson pulling the strings. [7]

Percival Flack Brundage
Brundage was treasurer and director of Project Hope from 1959 to 1962. [8] During this same period, he was setting up a CIA proprietary to support Cuban operations through JMWave. Brundage had also been President of the Friends of Albert Schweitzer College between 1953 and 1958. This was the Swiss college that Oswald applied to attend while making plans to go to the Soviet Union. A Unitarian, Brundage was also keen folk dancer, and may have attended the same folk dance festivals as Mike and Ruth Paine.

The Dallas White Russian Community
George DeMohenschildt testified that he was the one who rallied the Dallas White Russian community to pay for Marina's dental work after meeting her for the first time. No photos have been located which prove or negate the suggestion that Marina's teeth were in the extremely poor state alleged by both the émigrés and the dentists. The timing however becomes interesting if the Oswald’s reunion was indeed a chance for John Pic to debrief Marina. This is so because Andrija Puharich had patented a radio tooth implant in 1960. In 1987, Puharich admitted this invention was “classified by an agency of our government.” [9]

ENDNOTES
[1] Warren Commission testimony of Jeanne DeMorhenschildt. It is difficult to disagree with Jeanne's assessment that Marina having bad teeth made no sense. Not only did Marina have access to free dental treatment in the Soviet Union, she worked in a hospital which had a dental clinic

[2] Warren Commission Exhibit 1403, p771. This is a one page summary of an interview conducted with Dr Harvey Allen, dated December 10, 1963. Allen was a graduate student at Baylor who had assisted in the dental work performed on
Marina. Allen's name and Baylor phone number were listed in Oswald's note book

[6] US National Library of Medicine 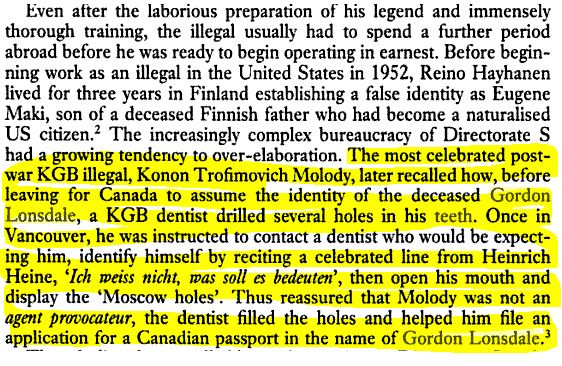 Mikhail Platovsky was an NTS (Solidarist) recruit into REDCAP/REDSOX operations who had been ordered to live in Minsk as the NTS coordinator for that city and to gather intelligence by all possible means, including the enlistment of citizens with "loose morals".

There are also some indications of the existence of an operation, possibly hidden under the REDCAP/REDSOX canopy, to have agents marry KGB personnel and bring them to the States.

I propose that Marina may have been recruited into such a plan by Platovsky; that she had holes drilled in her teeth at the US Embassy prior to leaving the Soviet Union; that such holes were for the purpose of of having her NTS baby-sitters in Dallas know she was the person recruited by Platovsky; and that they in turn, arranged for a CIA dentist to fill those holes.

After the assassination, the White Russians covered up by claiming they felt sorry for Marina because she had bad teeth and so paid to have them fixed (though as shown, there is no photographic evidence to back up claims of bad teeth, nor any reason she should have had any since the Soviets had free dental, and she worked at a hospital with a dental clinic).

The result of the holes being drilled, and attempts to fill them result in a cracked tooth which was not fixed until 1964.

Marina refused to smile for photographers in early photos because of a cracked tooth. She became irate after one photographer caught Marina In a full smile - broken teeth and all. She told one of her business advisors that she feared the American public wouldn’t send her money if they saw her teeth and thought she was ugly. After her husband’s death she had extensive dental work done…
http://news.google.com/newspapers?nid=861&...pg=6970,2638117

“[Marina] poses for photographers in the lobby and back comet [sic] the faint, taut smile that masks what is said to be a broken front tooth.”
http://news.google.com/newspapers?id=7_ocA...;pg=7322,475801


With thanks to Len Colby for providing the above links.

Imho, since Marina was young enough, it is not very plausible she had bad teeth. It is not common for young people (around their twenties) to already have a lot of bad teeth.

Despite of having free dental care in USSR, use of anesthetic was not common even in 80-ies. It was used only in cases or surgery or removing of entire tooth, not for drilling holes. Thus, pain was the significant factor for people not to visit dentist until situation has become really serious.

However, being pregnant and giving baby a birth could result in loss of calcium in the mother's organism. Maybe it could also result in condition (and/or loss) of teeth, since calcium is quite important component of bone and teeth structures? I do not know myself, I think an opinion of physicist is welcomed on this issue.

1). Frankie Kaiser testified before the Warren Commission that he was at the Baylor dental college for an abscessed tooth on the day of the assassination. As I have noted in “The Gray Jacket” thread, Kaiser is highly suspicious because he allegedly discovered Oswald’s dark blue jacket in the domino room, and Oswald’s clipboard on the sixth floor of the TSBD.

2). As Bill Kelly has noted on the Ed forum:

“The Baylor Medical Clinic, according to the US Army Report on the Use of Human Subjects in Chemical Agent Research (released in 1976), was a recipient of hundreds of thousands of dollars in Army and CIA funds for chemical/MKULTRA research in 1963-65.”

“Now we see that Dr. Ziggy Sears, of the Baylor Radiology, is the one who discovered that Jack Ruby had cancer.”

4). According to Mary Ferrell, the wife of DPD Officer Bob L. Apple worked at the Baylor University medical centre as a typist. Apparently, her name was Jimmy K. Apple. Bob Apple was the cop who Gerald Hill claimed he went with to the Texas Theatre from the abundant life temple. There is nothing to confirm this; however, the fact that Hill picked Apple as the cop with whom he went with to the Theatre could be because Apple would have vouched for Hill, had Apple been questioned on this point.

I think the fact that Apple’s wife worked at the CIA affiliated Baylor medical centre, provides a very indirect connection between Hill and the CIA. This also makes Apple a person of great interest, IMO. Keep in mind, he was also the cop who, according to the DPD Channel 2 transcript, was also arresting the “drunk” near the triple underpass(?)

“I am [Apple] down here with this 3-wheeler at the dead end. He has a loud colored jacket on. He is pretty drunk. Do you want me to take him up there or what do you want me to do with him?”

5). A doctor named Don Teel Curtis, who was an Oral surgeon at Parkland hospital; and claims to have been in trauma room 1 when the President was brought in, testified before Arlen Specter that he graduated from the Baylor dental college in 1962. I am not making any accusations against him at this point in time, but I certainly think he is worth looking into.

To say that I find the Baylor medical centre to be suspicious is a great understatement. Greg, well done for all the great work you’ve done on this issue as well.

Apparently this was the “drunk” arrested by Bob Apple, according to the report by Dallas deputy Sheriff Lummie Lewis:

@Hasan Yusuf wrote:Apparently this was the “drunk” arrested by Bob Apple, according to the report by Dallas deputy Sheriff Lummie Lewis:

A drifter from out west. He was beaten and murdered. His body was discovered in the woods off of Poole Road. Due to his unknown identity at the time, he was given the name, "Mr. X".
http://www.findagrave.com/cgi-bin/fg.cgi?page=gr&GRid=73207678

Thanks for that, Greg. How the hell did I miss it?

Here's another mention of him...