Terry W. Martin wrote:
....Or was the Beckley house - as someone suggested some time ago - being used by the police as a sort of halfway house and Johnson knew to keep the police in the loop if he thought any of his boarders had stepped out of line....

It is looking a lot like Beckley house was spooky. Even the Johnsons' running a half assed restaurant seems odd. Was it a place used for meetings, contacts, drops, and such? That Johnson was in the loop seems likely.
_________________
Release clear scans. Reveal the truth about Prayer Man. Preserve the history of the assassination of JFK.

Ok so I'll throw this into the mix:

Holmes said he pulled the November 1st 6225 PO Box application of Oswald's from the files and gave the residential address written on it to the cops.
It seems the timeline for this doesn't work but nonetheless it should be acknowledged.


Mr. HOLMES. Of course I was in contact with the chief inspector in Washington, who was listening to the radio reports, and I remember once he called and he said, "Well, now, could the shots have come from the terminal annex building. Has your office been shaken out, the annex." Of course we gave that attention but there was nothing of any nature there of any importance. I was doing all I could to help other agencies.
One of the box clerks downstairs came up after an hour or so when the radio reports came in about the apprehension of Lee Oswald following the shooting of Officer Tippit, and said, "I think you ought to know, Mr. Holmes, that we rented a box downstairs to a Lee Oswald recently, and it is box number so-and-so".
That was my first tip that he had a box downstairs in the terminal annex. That box is No. 6225.
Mr. BELIN. I am handing you what has been marked as Holmes Deposition Exhibit No. 1. I will ask you to state what this is.
Mr. HOLMES. That is a photo copy of the original box rental application completed by Lee H. Oswald covering box No. 6225, which he completed on November the 1st, 1963.
Mr. BELIN. Where it says, date of application, that you gave, is it not?
Mr. HOLMES. Yes.
Mr. BELIN. I notice over here in--a notation on the side 11-22-63, with some initials on it. Do you know what that is?
Mr. HOLMES. Those are my initials and they indicate that I took the original box application from the post office records on that date.
Mr. BELIN. What did you do with it?
Mr. HOLMES. I turned it over to an FBI agent at a later date. I don't know when.
Mr. BELIN. Did any particular employee ever remember actually dealing with Lee Oswald?
Mr. HOLMES. He could not recall what the man looked like. He couldn't identify him from what he later saw his pictures in the paper. He could not identify him as actually being the man that rented the box, because I have talked to him about it.
Mr. BELIN. Now, on Deposition Exhibit 1, for the name of the firm or the corporation, it says, "Fair Play for Cuba Committee" and "American Civil Liberties Union," is that correct?
Mr. HOLMES. That's correct.
Mr. BELIN. And kind of business, it says, "nonprofit," is that correct?
Mr. HOLMES. That's correct.
Mr. BELIN. Then business address, there is a dash running through there, and home address is "3610 North Beckley," is that correct?
Mr. HOLMES. That's correct. That is the address he gave as the residential address when he rented the box.

Here's the very spooky part of this angle.

The residential address written down on that application, assuming it's legit (Of course it may not be) was 3610 N Beckley Avenue. 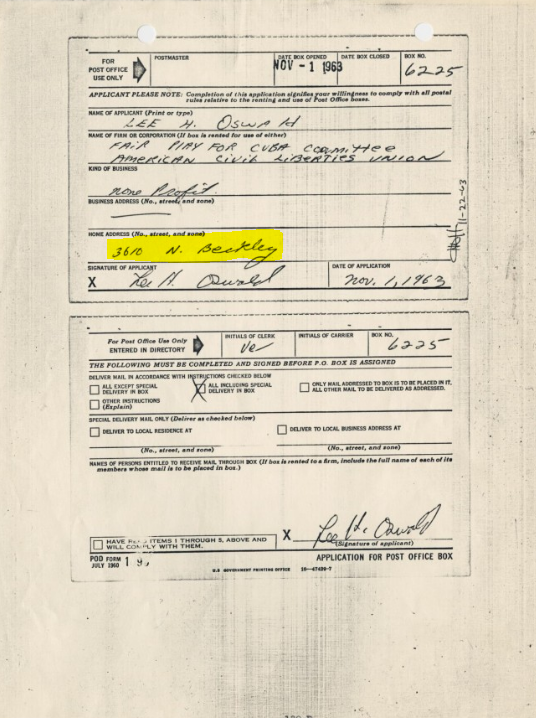 Then this strange testimony from Gary Taylor:


Mr. TAYLOR. I don't know why I was trying to locate him. I don't remember anything except I remember driving around one area one evening looking for a residence of his on some vague directions. As I say, I don't even remember if it was a residence of the whole family or just of Lee. I went back to this area within the last few weeks and located a building that stuck--or I had a recollection of one building in this area and I went back to the area and found it and gave that information to Agent Yelchek of the FBI. I don't know what he----
Mr. JENNER. What location was that?
Mr. TAYLOR. I gave him the exact street address---but it seems to me like it was---well, the name of the apartment building was the Coz-I-Eight [spelling] C-o-z---I---E-i-g-h-t--apartments, and I thing they were located at 1404 North Beckley. But the address I could be off on; but the name I do remember.
Mr. JENNER. What kind of a building was this?
Mr. TAYLOR. An apartment building.
Mr. JENNER. Brick?
Mr. TAYLOR. Yes.
Mr. JENNER. A more substantial-type thing than you bad seen the Oswalds occupy prior thereto?
Mr. TAYLOR. Repeat, please.
Mr. JENNER. Was this a building of a substantiality higher caliber than the Elsbeth Street home, for example?
Mr. TAYLOR. Uh--I would say it was in the same class. 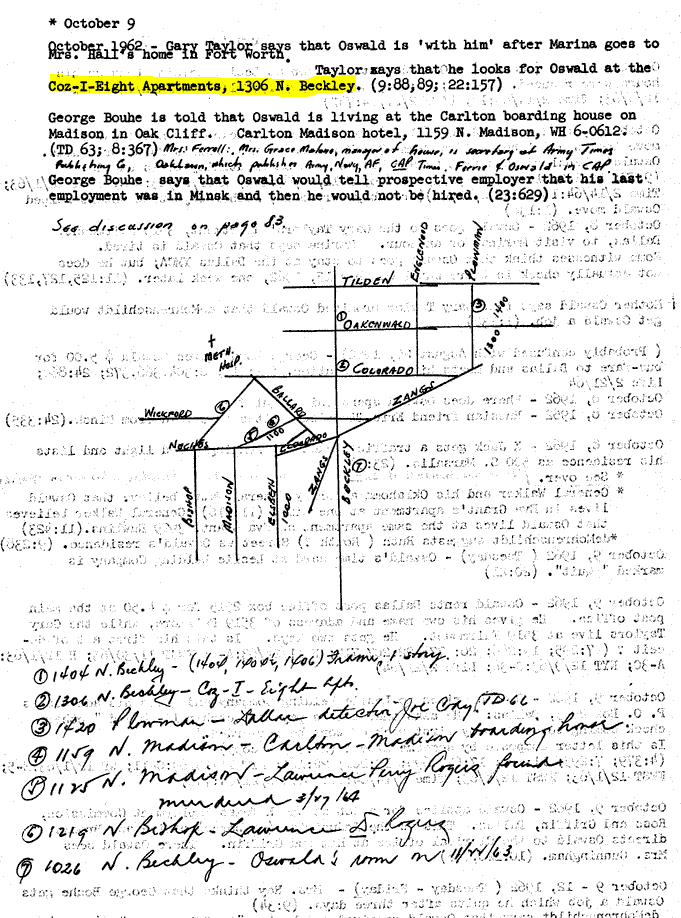 Maybe just one hell of a coincidence (another one) but I'm finding the anagram of the numbers for the Beckley address really weird.

Did Oswald rent a room at the Coz-i-8 apartments and simply jumble or forget the correct order of the numbers for the recently rented residential address on his PO Box application? It's possible.

It's spooky Mick.
That part in Bart's document about Mrs. Johnson comparing the smiles on Oswald's face is just bizarre. She's talking about Oswald when he saw Ruby approach to shoot him? I mean that is a subtle split second thing. I would imagine someone would have to watch the video over and over to catch that. And then to compare it to a week prior about the parade route? Weird stuff.
_________________
Release clear scans. Reveal the truth about Prayer Man. Preserve the history of the assassination of JFK.

I wonder Jake when that Ronnie Duggar interview took place? That'd be interesting. If it was prior to the mid eighties then how was it she had access to vision she could have seen this stuff on, I mean as you say the stuff with Ruby and Oswald is split second. It needs to be slowed down to see anything. It's spooky alright. Robert's has always been portrayed as the teller of tall tales but I'm thinking Gladys could tell a few too.

This Memo has been criticized before now by both Lner's and Cter's alike.

There are however a couple of really pertinent question raised with regards to 1026 N Beckley and Oswald having stayed.

One is with regard to the Beckley tenant register ledger and where that might have disappeared to and the other question related to A C Johnson, Gladys Johnson and Earlene Robert's movements, activities and their communications just after Oswald had allegedly stopped at Beckley to retrieve his jacket up to the time Oswald's picture allegedly flashed on the TV screen.

It simply beggars belief that the official Beckley tenant register is not in evidence, I mean it's mind boggling that all we do have in the way of any proof  that Lee Oswald had stayed at the apartments on Beckley is a scrap of paper vouched for by Gladys Johnson as a hand written copy of the original paperwork.

I am still not convinced Oswald lived at the famous Beckley address.

The lack of a tenant register is problematic even if he did not live there. Why don't the owners seem to have any records of their residents?

I like Mick's take on the other Beckley apartments. But I still don't buy the testimony that Oswald had the Beckley address on him.

If we were to believe the cops, Oswald seem to have been carrying a plethora of items in his few pockets and it reminds me of Mary Poppins' purse with the unlimited volume.

The lack of a tenant register is problematic even if he did not live there. Why don't the owners seem to have any records of their residents?

I like Mick's take on the other Beckley apartments. But I still don't buy the testimony that Oswald had the Beckley address on him.

If we were to believe the cops, Oswald seem to have been carrying a plethora of items in his few pockets and it reminds me of Mary Poppins' purse with the unlimited volume.

It's a shame he wasn't carrying a getaway car in one of those pockets.

There were a number of Magic Evidence Caves

The famous Paine Garage
Oswald's pockets and books
Jack Ruby's car (if I recall correctly, searched 3 times, with a truckload of new evidence taken away each time)

greg parker wrote:
As for this little conundrum - there is evidence either way and plausible explanations for the evidence either way. In any future publication, at least at this point in time, I would lay out all possible scenarios and the evidence for each. The only one I rule out is that he lived there the entire period.

At least with all the evidence arranged before us we might be able to make some sort of sense of the mess.

This article published in 2006 in The Dallas Morning News newspaper.

excerpts from the article:

For more than half a century, her grandmother Gladys Johnson ran a rooming home there.
Ms. Hall remembers no fewer than 16 tenants standing by the piano singing hymns as Grandma "Mimi" played her heart out, and, of course, sharing meals at Thanksgiving, Christmas and Easter.


Hugh Slough, 64, who now lives in Duncanville, remembers his fellow tenant as "definitely a loner, a very small man, very nervous. He had very small movements. When he moved, I'd call him a fidgety-type person, very nervous and very high-strung. We didn't see much of him."


Mr. Slough remembers Oswald as popping out of his small room to watch the evening news, then "popping back in." He remembers a male caller whom Oswald spoke to in a foreign language, which Mr. Slough later described to the FBI.


And this regarding Hall's mother and what she allegedly witnessed 22nd November:


A professional photographer, Ms. Puckett (Hall's Mother) was working in the studio she owned, then located on Jefferson, when police arrested Oswald at the Texas Theater. Ms. Puckett peered outside to see what the commotion was and was "horrified," says Ms. Hall, to see her grandmother's tenant being led away in handcuffs.
"She's the one who called Mimi and told her about it," says Ms. Hall.

And this about a maid  who worked at 1026 Beckley when Lee Oswald allegedly resided there:

She remembers Katie Gage, a live-in maid who was "so wonderful," she seemed more like a second grandma than hired help. 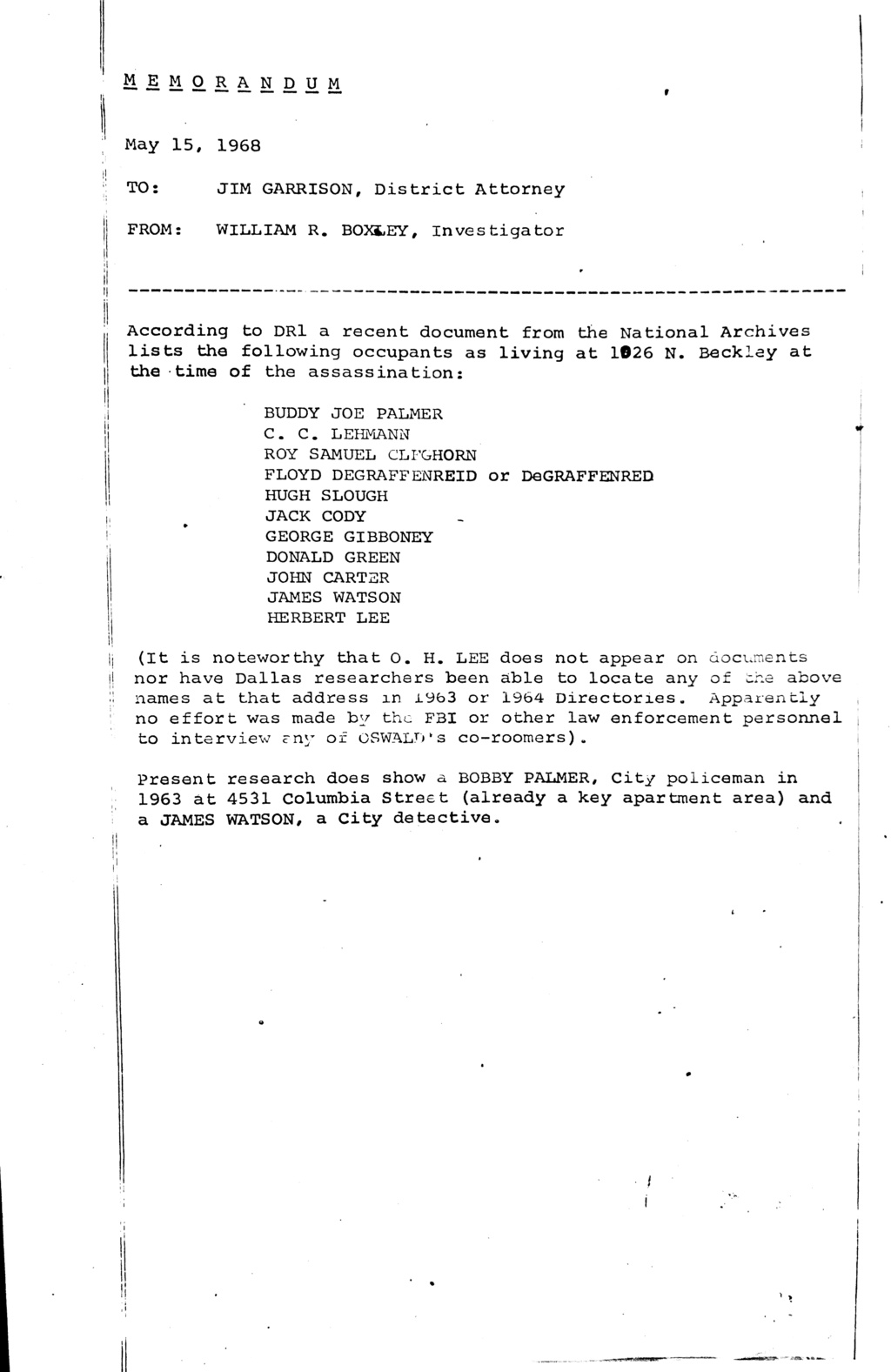