I remember seeing Assistant District Attorney Bill Alexander at the scene. Bill’s got a good nose, and after somebody had said, “I think he ran in there,” we went into an old furniture store looking for the suspect. Furniture was stacked everywhere in this old ramshackled place. I was there with Bill and five or six officers; all had guns except me. All of a sudden someone fell through the second floor. I remember screaming as I was scared to death! But it turned out to be nothing; he probably hadn’t been there at all. Some have questioned why an assistant district attorney like Bill Alexander was there. While it’s true that he had no reason to be there with a gun looking for whoever had shot the President, at a time like that, things do change and people run after whoever they think did something.

It would be. But this clip supposedly supported the official version, so I'm guessing what could be a rifle or shadowy figure in a 6th floor window as seen in a wobbly, blurry film.

Funny Scott Peters claim to fame is mainly as a UPI audio allstar. 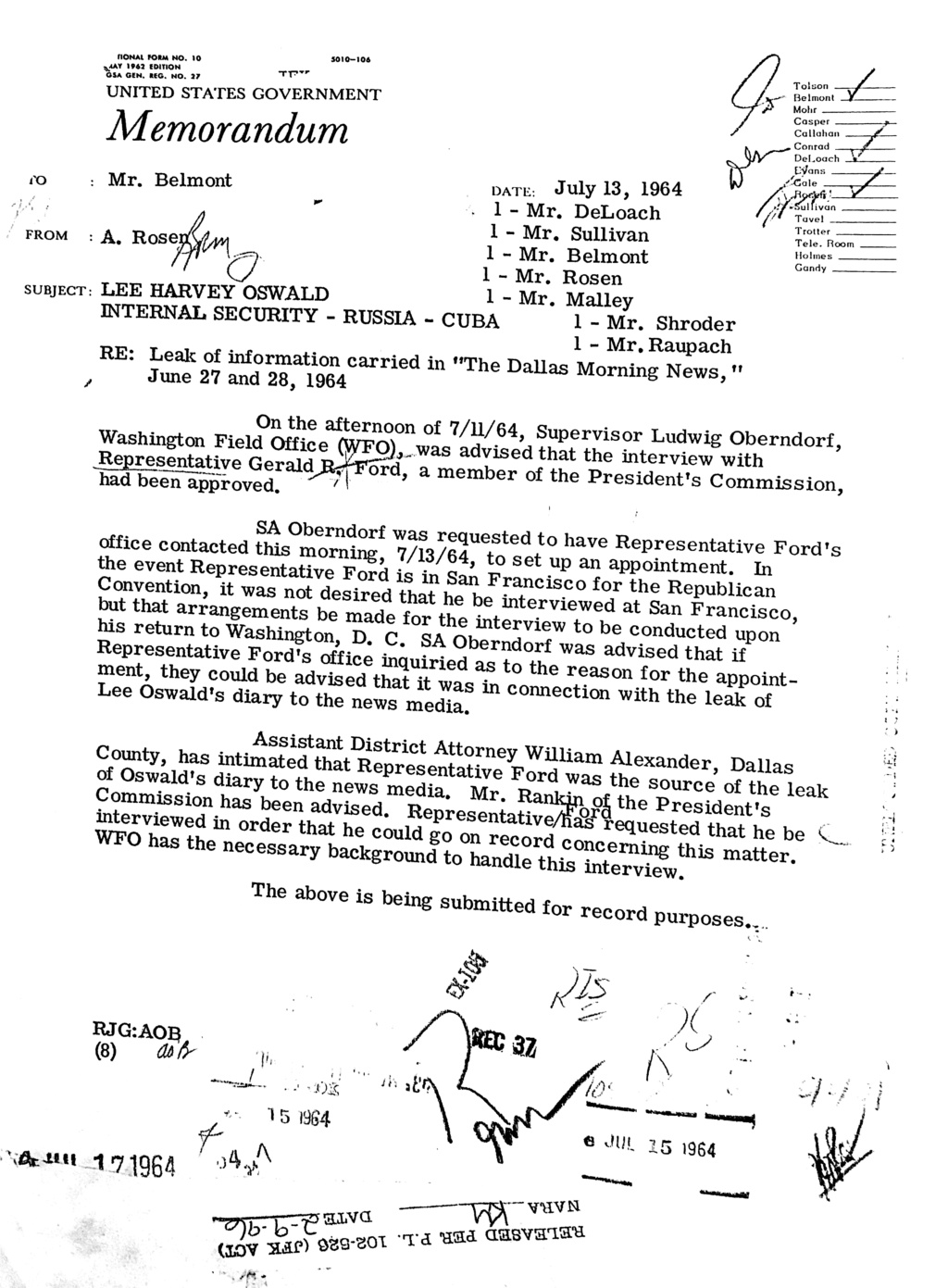 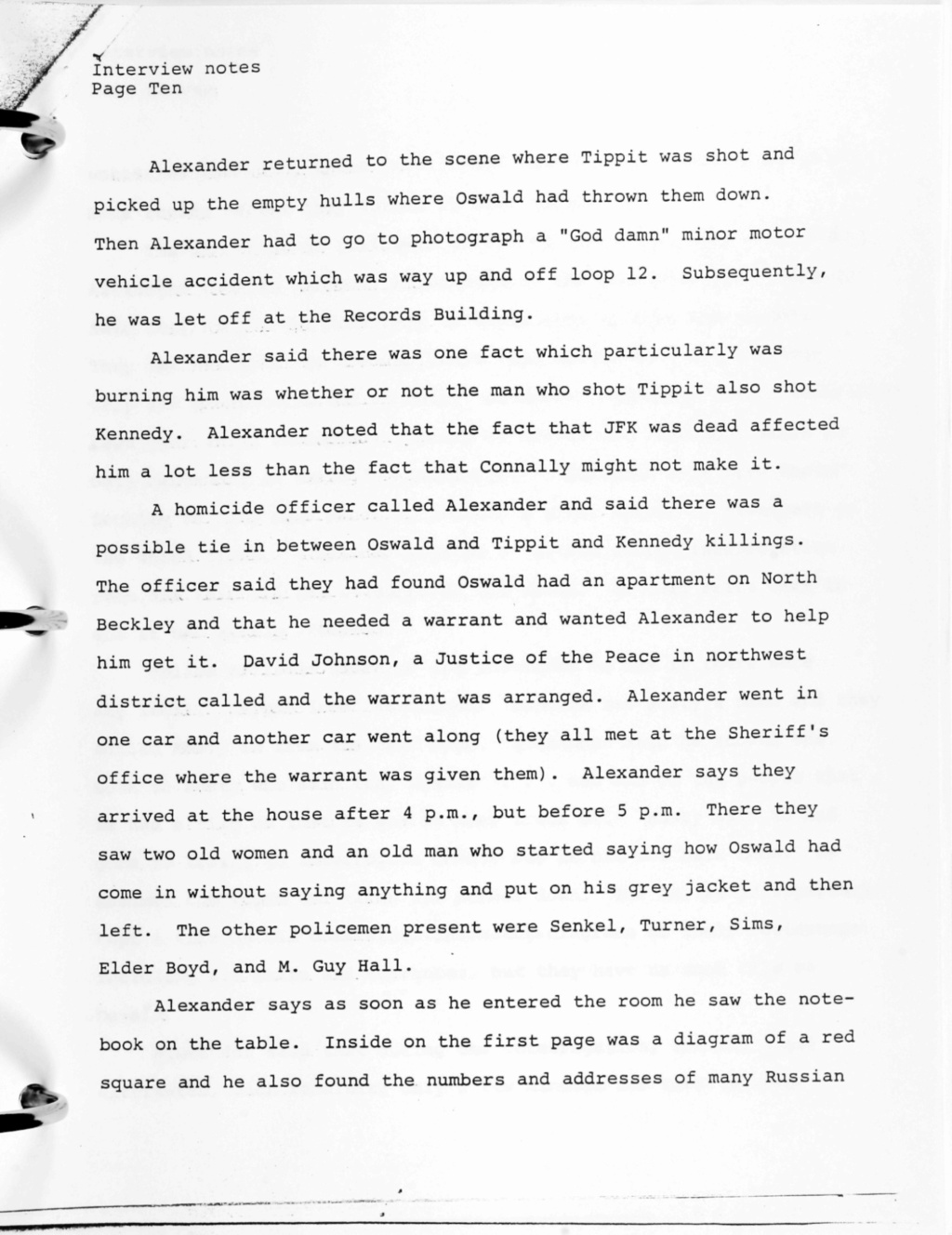 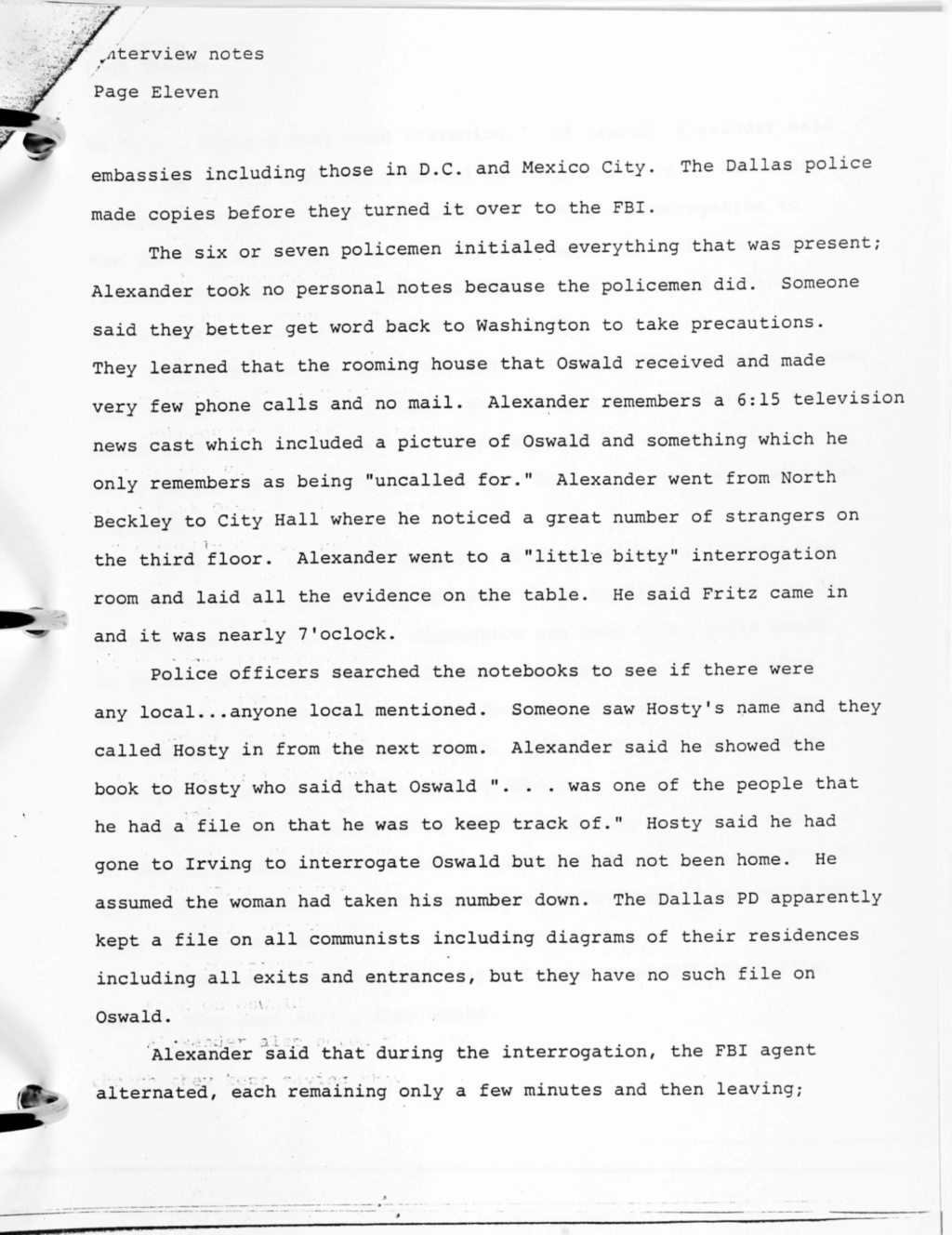 Ah, so they photographed a minor traffic accident but couldn't photograph any Beckley evidence... even though they worked long and hard, bagged each item and all initiated them.... its farcical

The notebook was lying out for Earlene and Gladys to read... yeah only if it was a dangle for spies or nosy people.
Ive heard enough, ... its all hokum.
Two cameras, commie literature, holster (and pistol) and more kept at the tiny room ANY cameras there are suspect as they were all supposedly found at Irving.
Not many calls... yet then they say he called the BL number, Irving, a lot. Geez no keeping a straight story at this rooming house.
Lots more wrong....but life is short
Cheers,
Ed

And Bill Alexander found no time to photograph the shells from the alleged murder weapon for the Tippit slaying at the scene, but had plenty of time to race off to the scene of a minor bingle and photograph that....really! This is more than farcical. Taking the piss.

Alexander picked up those spent shells, and what did nothing but tear off to a minor car accident. I say bullshit. Did Alexander take those shells with him? Where did he really go? 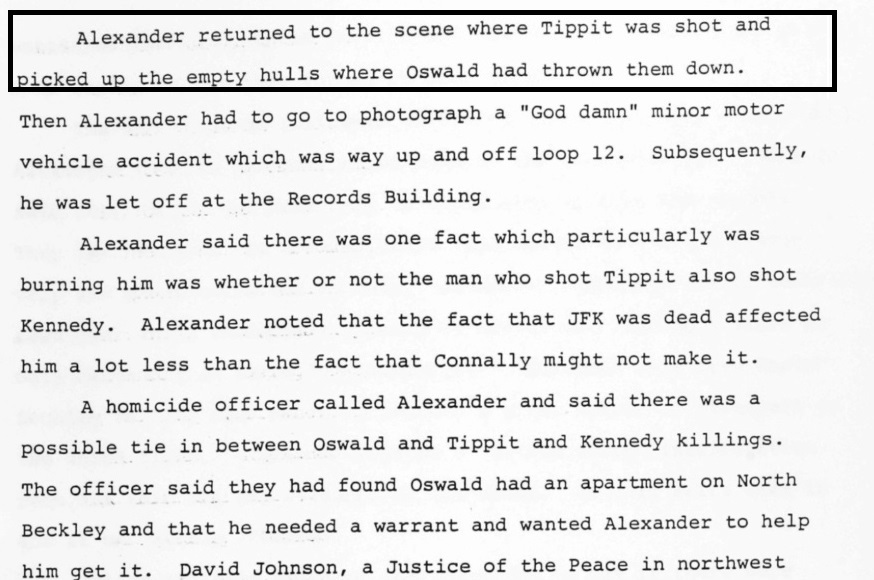 Yes its quite telling Mick....
Bill then takes Judge Johnston to Beckley and destroyed all evidentiary rules.
Their storyline is hard to swallow.
Piss is more palatable Mick.

A Little Ol quote from Billie Bob Alexander:
“The war between the States ended in 1865, but goddamn, it almost started again in 1963. Those Yankees come down here with unchristian Communist names and think we’re all a bunch of inbred, Mongoloid idiots. I say, f**k ‘em! Just f**k ‘em! Those Yankee motherf**kers.”

Telling quote Mick.
It wreaks of motive, opportunity and means,... to coverup or worse.
Cheers, Ed

It does Ed, there's more to him than meets the eye. Henry Wade chose to go out to dinner on the busiest night he was ever likely to face as District Attorney in Dallas. He had to be forced to return to his office later that Friday night by his minions. Bill Alexander was at the Tippit murder scene and was out back in the Alley at the theatre. He was running with the posse through the streets of Oak Cliff with his weapon drawn.

Alexanders past, his behavior and his deeds throughout his tenure as assistant DA say so very much about this man. In my view he was involved in railroading the "communist" Oswald.
_________________
I'm just a patsy!

Alexander became an assistant district attorney in Dallas in 1952, and during his first eight years tried about sixty murder cases, prosecuted gamblers, and managed special grand jury investigations. By late 1963, he was the chief felony trial attorney at the Dallas County District Attorney’s Office, where he secured more than a dozen death penalty convictions following appeals.

It was Alexander who found Oswald’s address book during the search of Oswald’s room in Oak Cliff. He noted that it contained Hosty’s name and office telephone number in it and when he returned to police headquarters he saw Hosty standing in the Homicide and Robbery Bureau outer office. He pulled him aside and waved the address book under Hosty’s nose.


“I grabbed Mr. Hosty by the arm,” Bill told us, “and said, ‘Mr. Hosty, I have something here that I want to show you. Now, you may look at this, but you can’t keep it. You can hold it, but you’re going to give it back. Now, god bless J. Edgar Hoover and god bless the FBI, but goddamn I know how you boys operate. Now, I want you to answer a question. What is your name doing in Oswald’s address book?’ “


Alexander told us that Hosty “him’d and haw’d” – seemingly surprised that his name was in the address book. Hosty suspected that Marina had given the information to Oswald after one of Hosty’s visits to see her.


Alexander said that he suspected that Hosty and Oswald knew each other, though he had no evidence to prove such an allegation. He seemed to be basing his belief on the fact that the FBI had an open file on Oswald at the time of the assassination that Hosty’s name was in Oswald’s address book, and that Oswald reacted to Hosty when he entered the interrogation room.


Bill said that Captain Will Fritz was one of the best interrogators of “all time” and that “any police department would have been proud to have him.”

Alexander said that Fritz was “kindly” in his approach, but not weak; courteous, but shrewd.

“A lot of people took Fritz’s approach as a sign of weakness,” Alexander said, “but they were reading the man wrong. Fritz had a high IQ and was very sharp. His approach was light-handed, but this was only in a disarming fashion. He remained in control at all times. And if Fritz was questioning a suspect, you kept your mouth shut!”


"Vince Drain told me a story about how Alexander, in front of his son, shot the boy's dog dead to get a point across. Alexander was feared, not respected, by others...he got too chummy with the local police. He was always out riding shotgun in the patrol cars and executing search warrants with them. In the off-hours, he was out boozing it up with the cops as well." Alexander was a "frequent drinking customer" at the Carousel.


"[William] Alexander participated in a midnight raid [11/22/1963] on the house of J.R. Molina...a Communist who was on the Dallas police's intelligence watch list, and it was originally thought he might be connected to Oswald. 'We did a deluxe search job on Molina's house,' recalls Alexander. 'He was polite and very scared. But there was nothing between him and Oswald.

Tackett was supposedly listening to Oswald's Mother from the next doors apartments water heater closet, taking notes on everything she said.
He wrote to Oswald in 1962 but did not get response.
Important bit is Aynesworth claiming to have the carbon copy of the letter, and said it was Alexander's info. I can understand Bill having a copy of tge letter sent to Lee from Lee's belongings... but not Tackett's CC.

Oh and this is a bug in the ointment too
https://www.maryferrell.org/showDoc.html?docId=59622&search=%22johnny_tackett%22#relPageId=59&tab=page 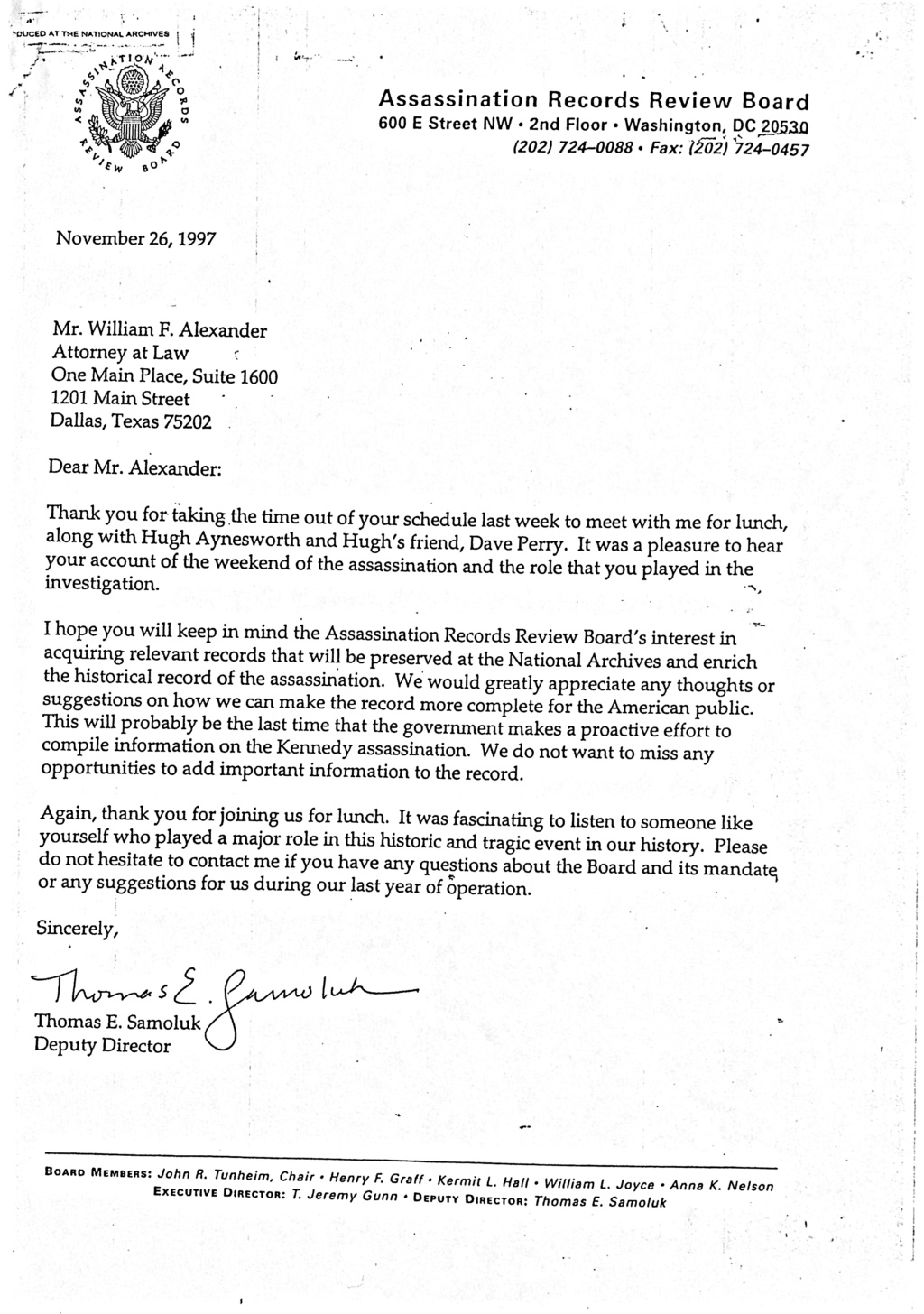 
Anyway, Captain Fritz wanted a chance to talk about what evidence we had, so we went over to the Majestic Cafe along with Forrest Sorrels, the local head of the Secret Service, an FBI guy, a couple of Dallas police, and I don’t remember who else. We went and got a big table, ordered, and then began to talk about the evidence we had and whether we had enough to file. In working closely with Fritz, I had the benefit of whatever information he had, and the case looked solid to me. Fritz and I had the opinion that we had enough to file seriously for both the Tippit killing and the murder of the President, so I drew up both complaints. I signed the complaint against Oswald for killing Tippit, and then I got a phone call from Wade. Wade told me not to sign the complaint for the killing of the President because he wanted his signature on that. I worked for the man, so that suited me fine.


The Majestic Cafe, oh to be a fly on the wall. This meeting of Fritz, Alexander, Sorrels, an FBI guy (Probably Hosty or Shanklin) and a couple of Dallas cops at the Majestic Cafe is more than likely where the railroading of Oswald really started to take shape.
_________________
I'm just a patsy! 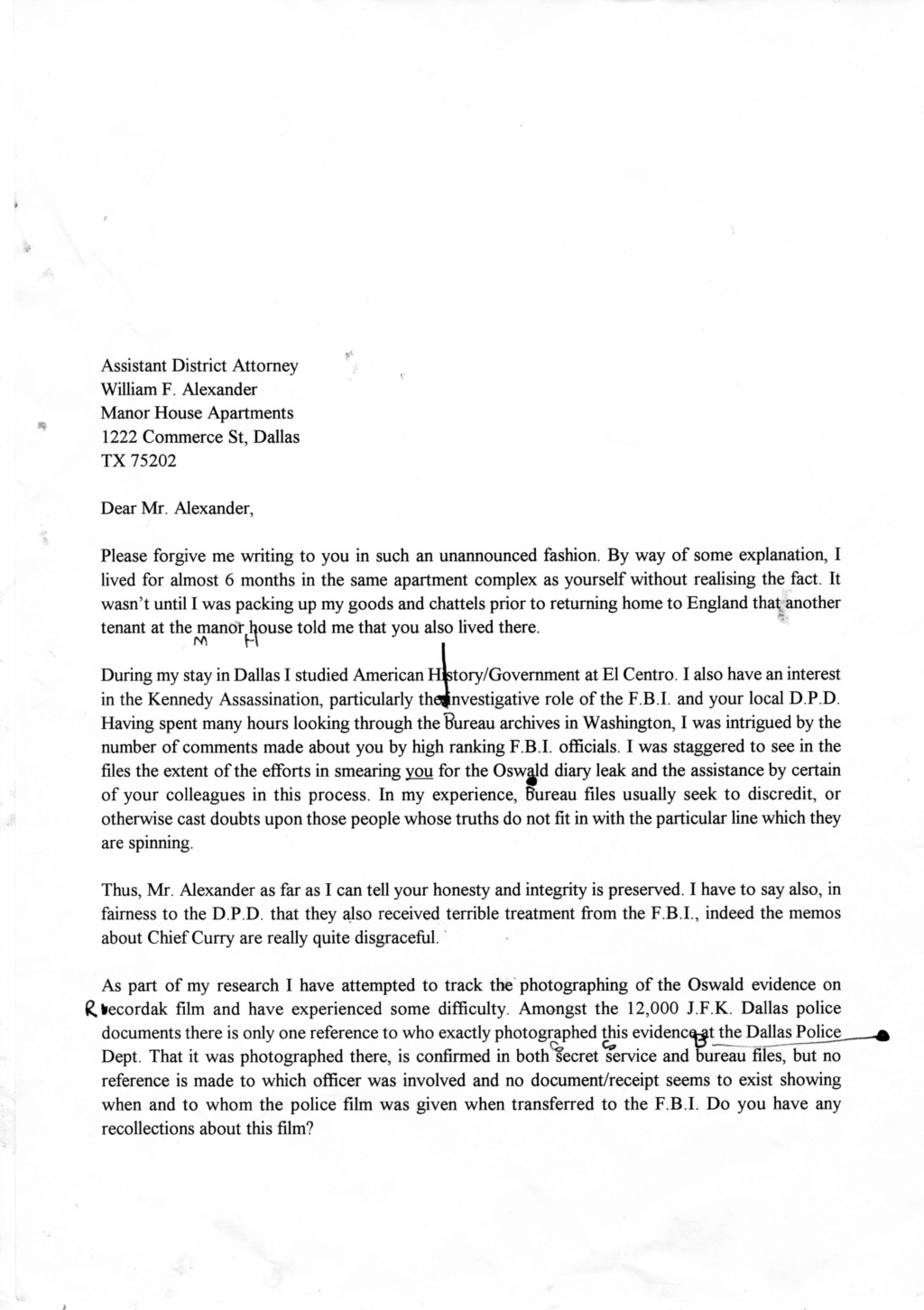 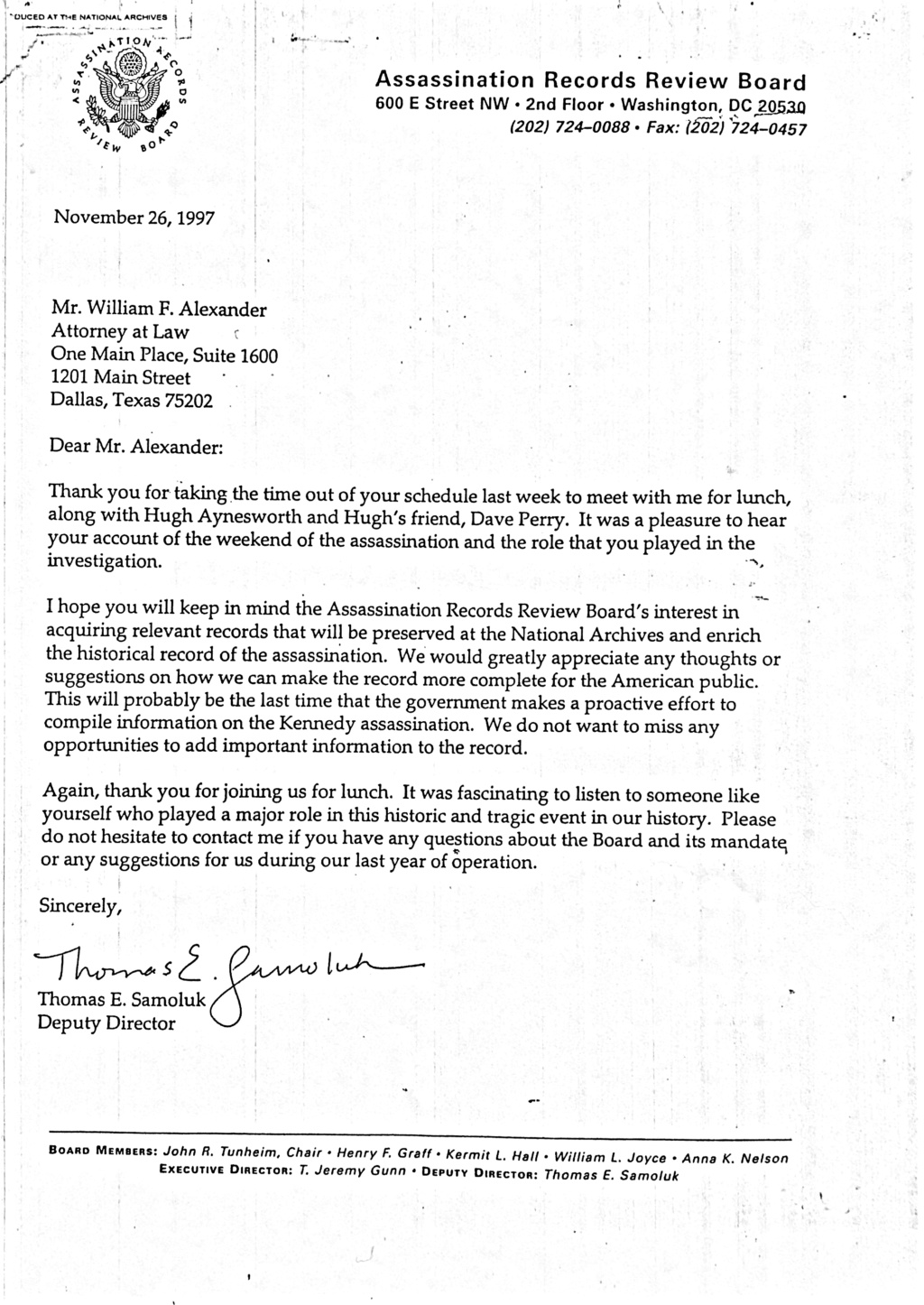 A reminder of the sort of guy Bill Alexander was.


“The war between the States ended in 1865, but goddamn, it almost started again in 1963. Those Yankees come down here with unchristian Communist names and think we’re all a bunch of inbred, Mongoloid idiots. I say, f**k ‘em! Just f**k ‘em! Those Yankee motherf**kers.”

HSCA notes on Bill Alexander.
Thanks to Malcolm Blunt. 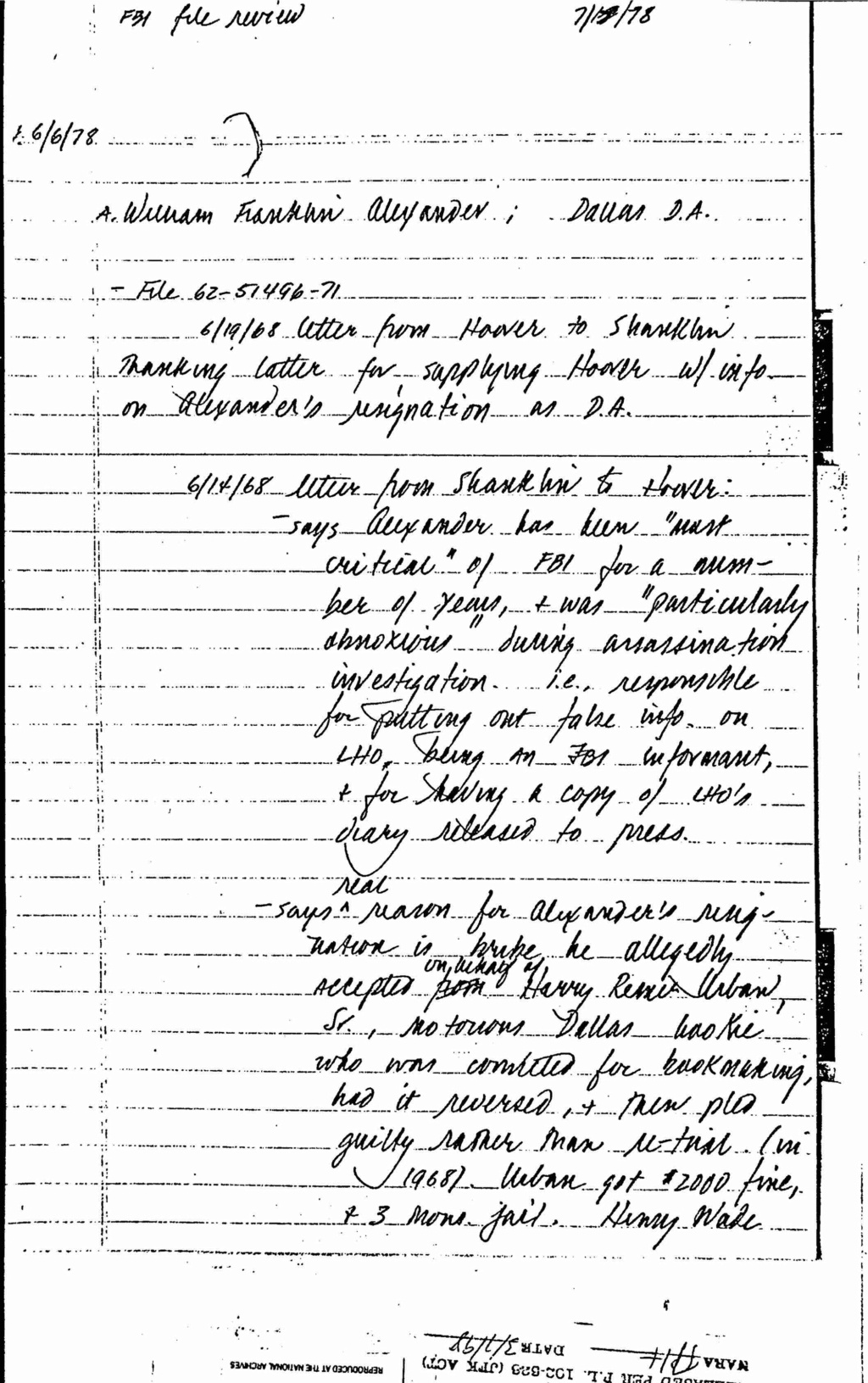 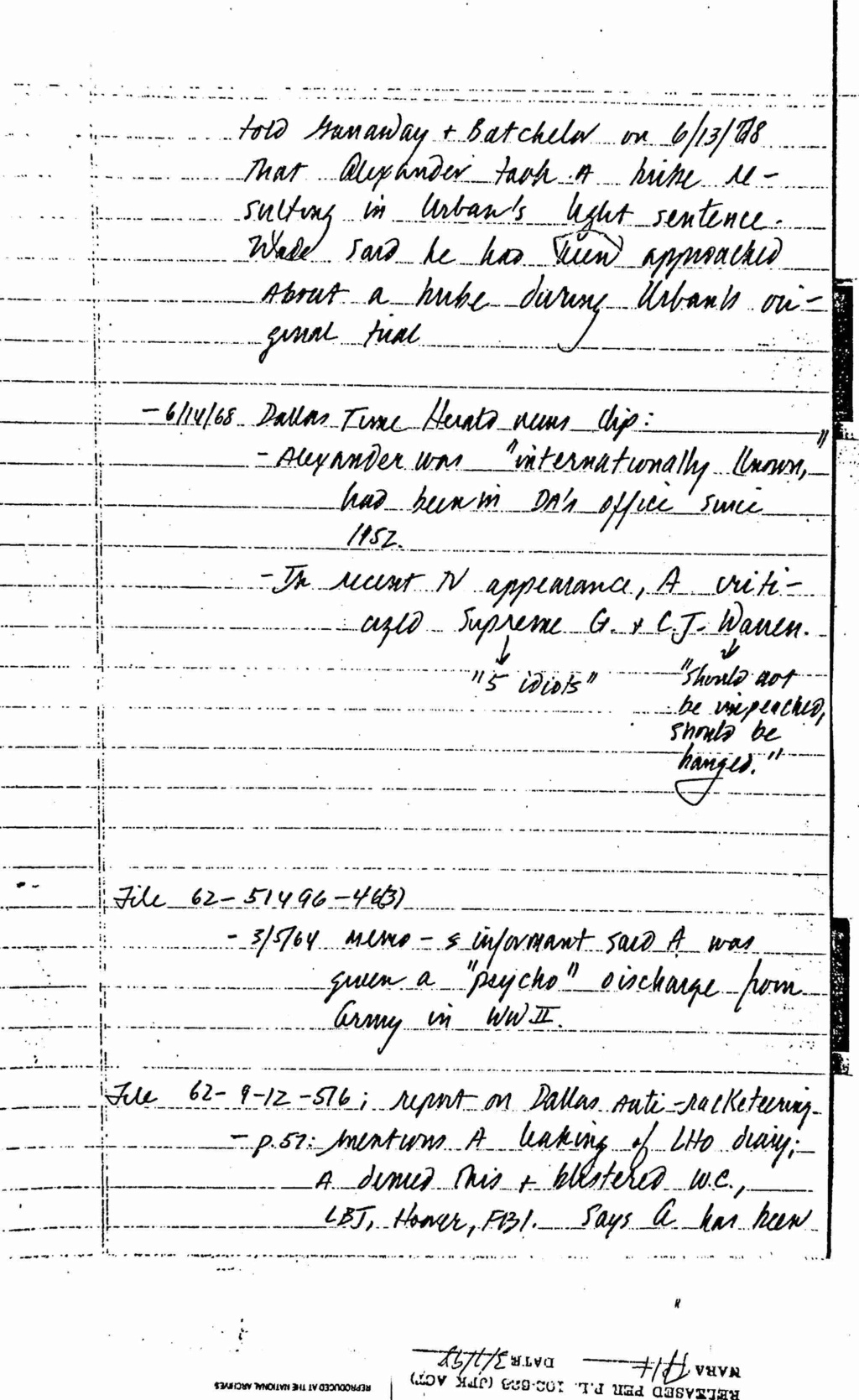 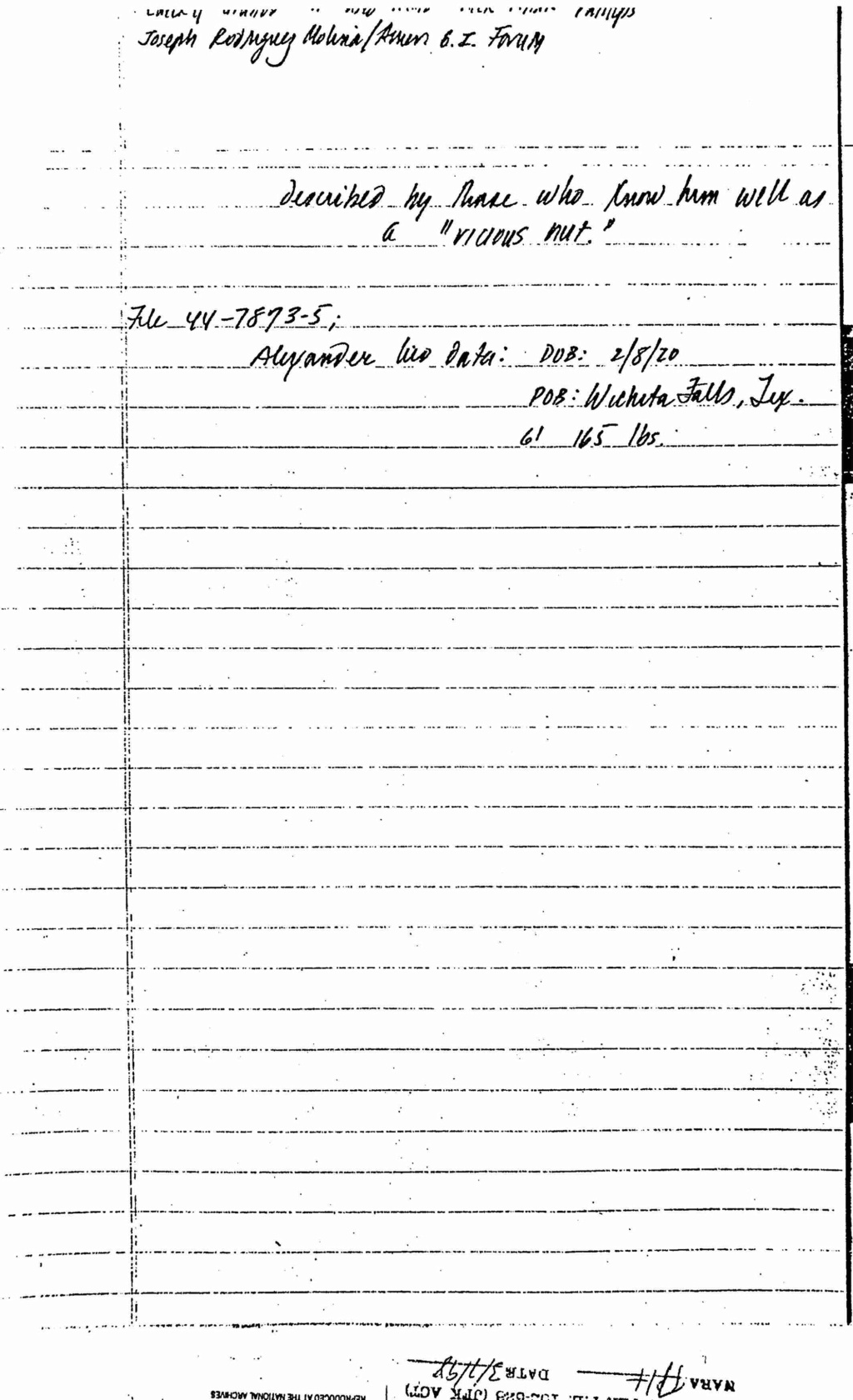