Just when you thought you have seen it all

How on earth can anybody be so gullible to believe this nonsense? 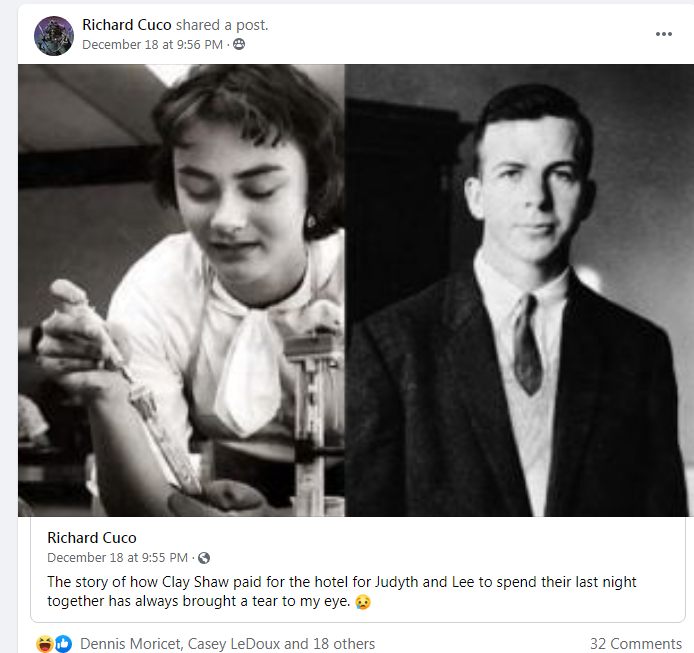 HIS COLD GREY EYES GLEAMING, LIKE THE DAWN RISING OVER LAFAYETTE SQUARE

Inspector Kudlaty ." So which one of you did it? Which one of you sent that doppelganger down to Stripling High? Which one of you knew that Marguerite had documents and photos that proved that almost all of the conspiracies you peddle are scams? Childishly transparent self contradictory pacifiers to keep the sheeple safely tranquilized? Oh yes! I know the trick!! The promise of change ensures that nothing does...keep the poor folk hypnotised by shadows until they're afraid of their own..."
Grandpa Jack " I Protest!! We're honourable researchers!! The best way to bring down this corrupt tyranny is to convince people there were 16 headless bassoon playing dwarf assassin's on the grassy knoll"
Donnie " Tune in to I Protest on Truth Frequency Radio!! Pay 15 bucks an hour to hear me denounce the evil capitalist swine, the feminists and the transgender Zionists who threaten the sanctity of my lily white stupidity"
Grandma Charlie " We know the truth to a metaphysical certainty!!JFK was assassinated by unknowable sponsors!! We know that I know the truth!!(hic)"
JOHNNY " You don't happen to have a twin brother do you Inspector? Perhaps one who was an expert parachutist? I'm thinking of expanding you see...how d'ya feel about being DB Cooper's doppelganger? "
Dawnie ( blushing) " oh Johnny you're so smart"
Davie" why am I standing stark naked in this hastily dug shallow grave in the middle of this barren wasteland at 4 am in the morning with blood pouring from the scratches on my face, a shovel in my hand and with strangely undulating bin liner at my feet that seems to be writhing and moaning " help!".. I don't know officer ..look there's DB Cooper's doppelganger over there!!"
Inspector Kudlaty ( look of utter repulsion) " ENOUGH!! You tempted that poor Marguerite up here, she was quite happy working as a secretary for the boss of a New Orleans coffee company...but you promised her Z list fame on the alternative troofer circuit... tantalising her with the prospect of a patsy of her own...what was it to be? A passionate romp in the hay with Sirhan? Or fumbling in the back seat of James Earl Ray's white Mustang? Guest slots on the Raw Deal with Jim Fetzer? Or maybe Jesse Ventura? Did you have a book deal lined up with Trine Day? But this Marguerite wouldn't play ball would she? She wouldn't say she saw Judyth, Lee and Raffaelo the Archangel do the watusi along Camp Street...so you just whistled up a doppelganger the lab...you Conspiracy whoremongers disgust me...i'll leave you with your consciences"( looking at the drink sodden heap on the sofa slumped against the tin foil hatted wretch) " or what remains of them ..I want whomever sent the doppelganger down to Stripling High to report to the police station tomorrow morning....or else I'll have a SWAT team of high level mechanics up here... and I promise you they'll be a few more names for Penn Jones list of mysterious deaths"
EXIT INSPECTOR KUDLATY

Grandpa Jack " Well family what do we do? Do we call Peter Janney or do we fill Davie here with ruhypnol and bundle him off in an unmarked white van?... I think Kris has a couple lying idle while Judy is in Montenegro getting the claws of her crabs clipped...let's have a family vote...all in favour of Davie say Davie .."
All " Davie"
Grandpa Jack " Good that's settled! there's a documentary I want to watch...Jim Fetzer and Ole Dammegard have discovered proof that the Pharaoh Khufu was actually a sanitation department official from Poughkeepsie who accidentally fell into a Zionist time loop...Moses was really Rodney Dangerfield too.."
Grandma Charlie " wait a minute... I know all the mid to low level facilitators around here and I've never heard of this Inspector Kudlaty..."
Johnny " Still it was a terrible thing wasn't it? That poor Marguerite.."
( Howls of callous laughter)
Grandpa Jack " You sound like some snowflake from Amnesty international boy!! What's next? Wearing sandals and saying that the Holocaust really happened.. Grandma Charlie is right!! Just to be sure i'll call Superintendent Gordon down at City hall...and Jimbo too, at the laboratory, just to be certain no doppelgangers have escaped.."
END OF ACT FIVE
_________________
A fez! A fez! My kingdom for a fez!!
The last words of King Richard HARVEY Plantagenet III
Bosworth Field 1485

Grandpa Jack " Call Larsen!! Tell him to crack open the bottle of Château Schubert '54..ive been saving in for a really special occasion ( sotte voce) when Davie here is safely lobotomised, castrated crammed full of dopamine and largactil and just sits around dribbling and posting highly obscene offensivegibberish on alt assassination jfk...or even better when Donnie finally passes the entrance exam to that anti semitic masseuse school in Angola..."

Johnny  " Château Schubert '54?...thats  almost 1000 bucks a bottle...kinda frisky...a playful self confident little champagne ..tastes like a Scandinavian au pair cavorting on your tongue...or a middle aged frump agreeing that she briefly saw some nondescript kid outside her house nearly 40 years before because she thought by saying that the handsome guy asking the question would want to jump on her bones ..that hadn't been jumped on since Welcome Back Kotter went off air..."

Dawnie ( hopefully) " what did you say about jumping on peoples bones? Let's forget the champagne...a nd the dead Marguerite... I've got my Ruth Paine diaphragm in my handbag..( practically drooling) let's go upstairs...NOW"

Johnny ( recoiling) " I've gotta wash my hair..shit I got a toupee.. I've got a headache.. the 32 luminous midget Nazis that live under my bed have stolen my libido.."

Dawnie ( disappointed) " they've stolen it again!! What about the $200000 I gave you last week to buy it back?"
Donnie ( barely able to contain himself) " I'll go upstairs with you Dawnie....as many times as you want..."

Dawnie ( growling) " you just sit the fuck back down.. I'd rather be gang banged by 32 luminous midget Nazis..."

Donnie ( meekly) " can I film it? Or at least sit in the corner...I speak excellent German...( turning to the unconscious Davie) do luminous midget Nazis speak German?"

Grandpa Jack  "Stop this foolish chatter... It reminds me of that symposium that flatulent blob Fetzer organised back in 03"

Grandma Charlie ( sternly) " a cover up enhancing operation if there ever was one.."

Grandpa Jack ( with a resigned shrug) " No darling, just a bunch of pompous cretins letting off gas...it was Is Seeing Believing in the assassination of JFK symposium that finally convinced me that there was a fortune to be made, bilking the gullible buffoons who believe any old shite...wait what was I talking about..oh yes.. Superintendent Gordon...good news family!! I checked tberest no such person as Inspector Kudlaty.."
Grandma Charlie " Aha just as I suspected!! An agent provocateur!! Sent into our midst by the faceless stateless sponsors.."

Grandpa Jack ( sadly) " More like one of those strange men Donnie meets at his stamp collecting club.. the indignity of it.. . a son of mine... wearing leather lederhosen ...to go stamp collecting..I almost wish he'd bring a Jewish girl home"
Dawnie ( puzzled) " But I saw him!! just as clearly as I see HARVEY in your photo montages..if Inspector Kudlaty doesn't exist who was standing there? What about that poor Marguerite?"

Grandpa Jack " For Johnny's sake!! How the FUCK did you graduate from lawschool? I haven't seen a dimmer light since Donnie fixed the Bradenton lighthouse back in the Great Fog of 97...when that convoy of Israeli ships were sighted.. Someone was pretending to be the so called Inspector...one of Donnie's anti semetic lederhosen wearing philatelists...all the Marguerites are safely tranquilized and locked in the laboratory...with the doppelgangers... and that bride Larsen's genius cousin is making for Fezzo"

Donnie ( giggling) " what a terrible accident..."

SUDDENLY THE STUDY IS SHAKEN BY AN INHUMAN ROAR... AGONISING SHRIEKING LIKE SOULS IN TORMENT ....

Grandpa Jack ( colour draining from his cheeks) " oh shite!! It's Cory Hughes!! He's managed to break in again...we'll be forced to listen to him and Donnie raving on about jews... what happened to the Rottweilers?"

Grandma Charlie" Fezzo got loose and forced them to read his Evidence IS the Conspiracy essays...his incoherent garbage even turns killer dogs into neurotic wrecks"

Johnny ( whispering) " Do not mention those essays again..."

LOUD COWBOY BOOTED FOOTSTEPS... LARSEN THE BUTLER BURSTS IN...
Larsen " Master Jack sir... I was just checking Fezzos pit... he's escaped... he's eloped with a doppelganger... and when I was coming back inside ( gulps) well sir there's police vans outside... someone was killed in Stripling High... there's an Inspector Kurian outside"

Be safe if you see a lederhosen wearing anti semitic philatelist or an unmuzzled Fezzo please don't approach them...call ROKC
_________________
A fez! A fez! My kingdom for a fez!!
The last words of King Richard HARVEY Plantagenet III
Bosworth Field 1485

She has a new book out.