Is this the ole, 'he changed his name from William to Bill to avoid discovery," S.O.P. of CIA assassins we've been told to believe, or does it support
Culligan's 1970's claims?

(Sometime after enlisting in the military, Roland B. Culligan quickly aged three years....)

On 16 July, 2007, Lee Forman posted that he could not locate Culligan and a list of questions he wanted to ask is he had located him.:
http://educationforum.ipbhost.com/index.php?showtopic=10360&page=2#entry110272

Dallas taxi driver Willaim Whalley made the same move, and there is no record of his service and Navy Cross award reporters quoted him claiming in November, 1963.
https://familysearch.org/pal:/MM9.1.1/FX98-Z5G Whaley's parents married on 3 July, 1907, eleven months before he was actually born on June 19, 1908.

There is no evidence he was awarded the Navy Cross as his name is not included in the roster or citations of WWII Navy awardees of that honor.:

Here are the citations in chrono order:
http://projects.militarytimes.com/citations-medals-awards/search.php?medal=3&service=&conflict=&term=&page=92 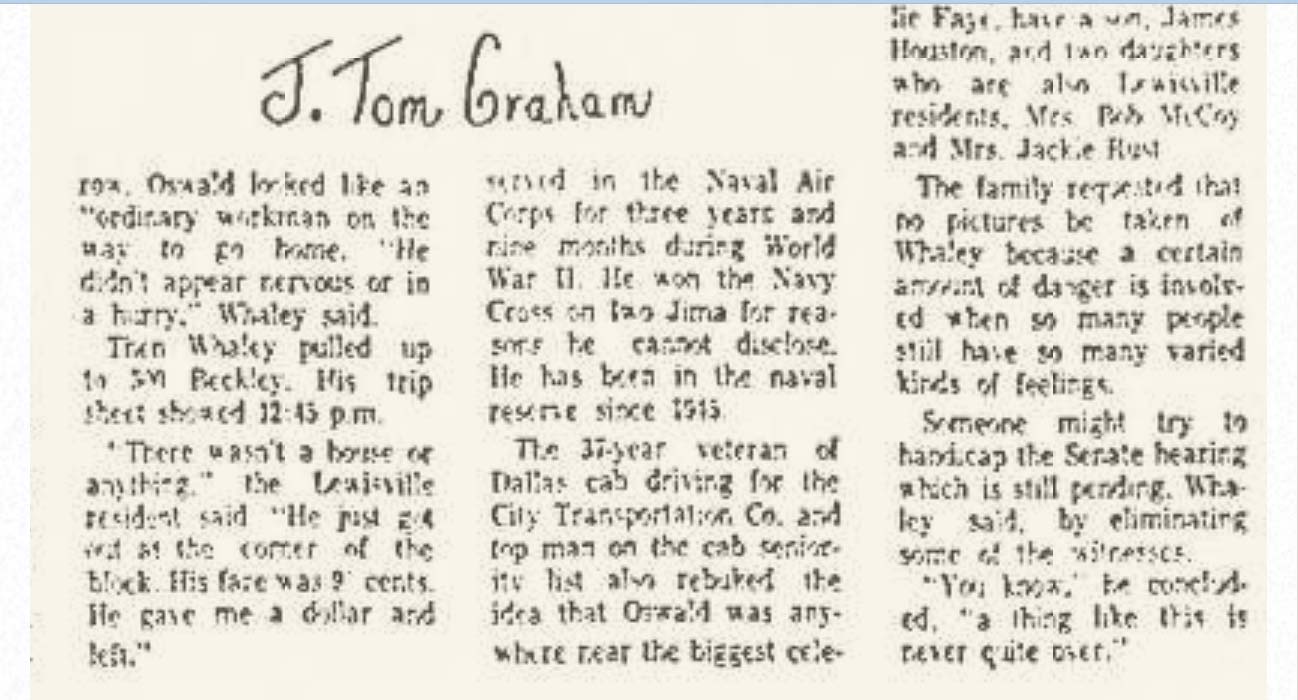 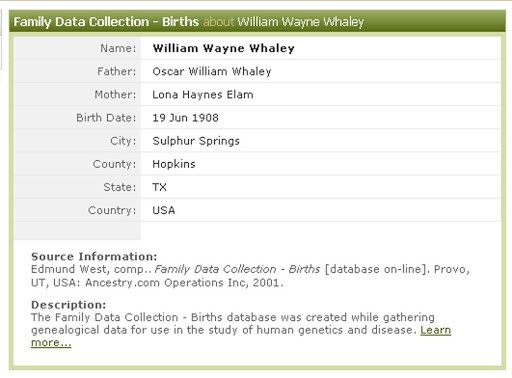 Four U.S. census age recordings, all that are available, a family submitted birth date for DNA match projects, and his parents marriage record with the consideration that his mother would have been 16 years and 5 months old if William Whaley had really been born June 19, 1905. Would you feel more comfortable buying a used car from me, or from Whaley?

WC insisted on a photo of his taxi four months after the reported Oswald ride, and of his passenger manifest with any ole time written on the relevant entry but there is no employemt or military record of Whaley, no Cabbie license, no Texas drivers's license, no D.O.B. background info.
What happened to 37 years, driving a cab? Did they have cabs in the Pacific War theater? Records indicate Whaley was born June 19, 1908. The 1945 Dallas City Directory describes Whaley as a cab company dispatcher.

There are 55 years between 1908 and 1963. Assuming a generous 16 years as a youth not driving a cab, there are 39 years, minus years serving in the Navy and time spent as a dispatcher. Why was this description so important to William Whaley? Consider that Whaley is the only source of so much of what is now ingrained in some minds. He describes a calm, cold, lone nut who would have given up his seat to an old lady and waited for the next taxi to come along. Mr. Ball could only dream that Whaley had supported his testimony with a call to his dispatcher to request a cab as the old lady assumed he had.

Gil Jesus made a case about the accuracy and consistency of Whaley's testimony.:
http://www.giljesus.com/jfk/cab_ride.htm

After re-reading the EF 'thread' on "Culligan Man" (Hey!), there's a few loose ends to tie up with your inferences here, Tom.  Gil did touch upon most of them, but your original research opened up a lot of closed doors.

If I can find a third guy who advanced his age exactly three years, right down to the date on his grave stone, contradicted by birth and Social Security records, maybe I'll read more than, "Hey Culligan Man!" in reaction to this research, but Mark, you're revealing your age. I haven't heard that advertisement since LBJ was president.

If you recall, Mark, you said you did not mind some of the "too extensive to chalk up to coincidence," Mrs. O'Blazney family members info seeing the light of day in this 50th anniversary time period. I'm assuming most readers of this have almost no frame of reference of what I am asking you. If you are interested in doing it this way, I'll start another thread, and post some of my related research, mindful of respecting your privacy, and hopeful that you'll expand on some of it and share your perspective.

For now, I have been meaning to ask you if you recall Leo indicating to you that he knew about Bill, Mike, or Jerry or discussed their work and connections with you, or were you simply refered to Leo as someone who was a DC native who knew his way around and had been helpful?

Well, Tom...... Mr. Garrison didn't get much of a chance to state his case to the MSM of the day, did he?  Wish it were him responding to you this day instead of me.  But Uncles Bill, Mike & Jerry were never discussed by Leo & me.  Hope that doesn't sound too much like 'Me & Lee', huh?  Oh, Lordy.  Must PM discuss before saying more, fair?

More than fair. I guess I give some too much credit, even after I've forced a retraction.... once again, he did not do his homework.

Back on topic....Whaley was more resourceful than Culligan. Had he lived, Whaleyn would have been eligible to collect Social Security benefits three years early since his SS birth year also morphed to 1905, as did his death certificate.: 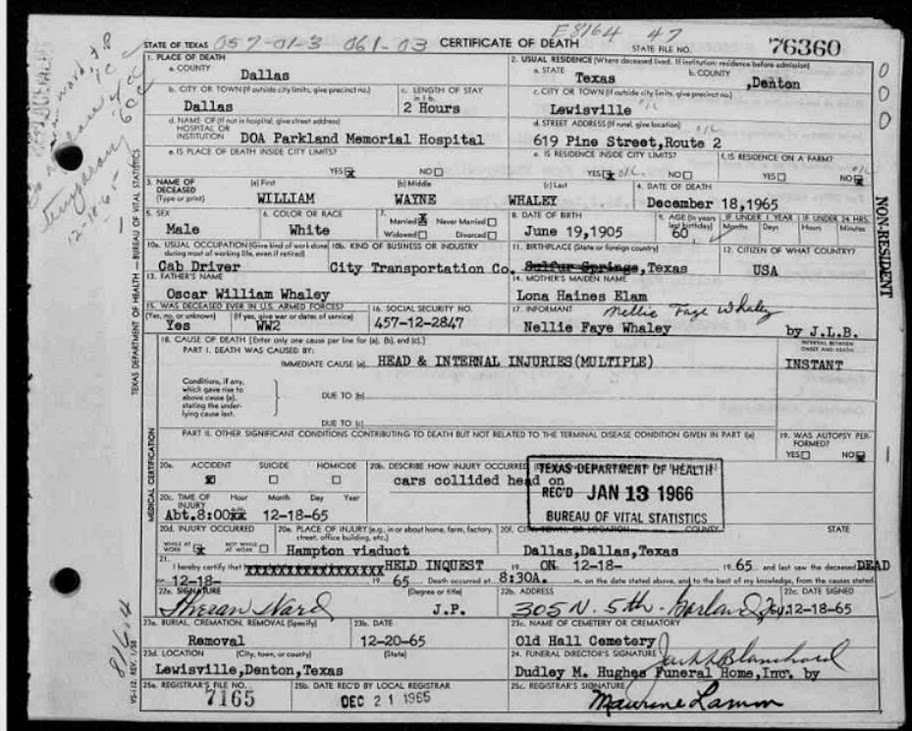 In Nov., 1931, however, whan Whaley's son was born, Whaley was not William Wayne, but William Weldon, unless it is an error and his name and his newborn son's name was reversed. But Whaley was 23 years old, consistent with a D.O.B. of 19 July, 1908.: 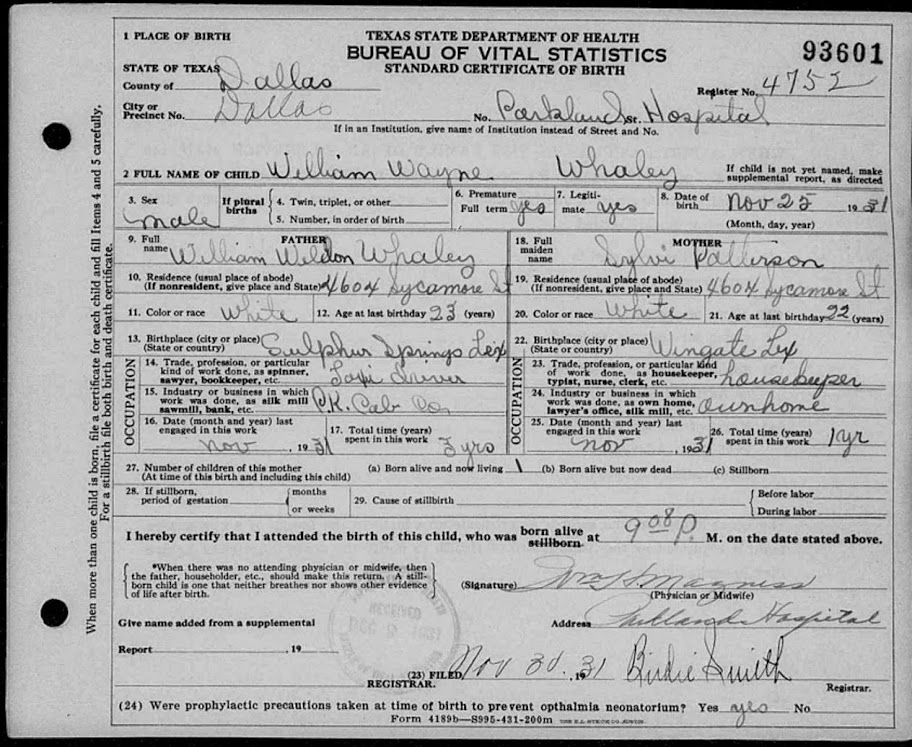 A deep background check yielding these kinds of conflicts would have impeached Whaley as a criminal trial witness, just as this background info would have prevented Mary Germany Bledsoe from making a rape accusation resulting in a conviction in a 1964 Dallas court.:
http://wc.rootsweb.ancestry.com/cgi-bin/igm.cgi?op=GET&db=browne&id=I9285
Name: James Eulys BLEDSOE
Note: He was slim, 5'll" tall, and elegant with auburn hair and green eyes. He moved from TN with his family to TX around 1910. He divorced his first wife because while he travelled in his job for Southern Pacific Railroad, she played around and got pregnant. He gave the child his name, but the marriage was over. Died of a stroke.

They had the following children:

He is a child of another man, not James Eulys BLEDSOE.