In his HSCA interview Billy Nolan Lovelady said it took him 20-25 mins to get back inside the TSBD, so that is after he is caught on the front steps by Martin and Hughes smoking a ciggie. You wonder whether with the 20--25 mins admission how much is actually true of him re-entering with Shelley through the side of the TSBD?
He then supposedly took a load of law enforcement officers between 10-15 of 'em up to the 7th and 5th floor and then when taking them to the 6th he is standing by the freight elevator and notices them finding the shells and the rifle.
Then of course his statement is taken inside the DPD at 13:30, that's before Oz is brought in!

Listen carefully at 29:00 in for the admission of his late return, the rest of the above stuff is scattered all over the tape. I have to say that this tape is better than No. 1.
Groden is present and so is Lovelady's wife.

Sean Murphy posts about Billy Lovelady at the Education Forum in 2013 (Prayer Man: Out of the Shadows and Into the Light, Chapter 9):
In the first part of his HSCA interview Billy Lovelady Lovelady is shown an image he has never seen before: a frame from the John Martin film showing him (Lovelady) standing over by the east side of the entrance some 15 minutes post-assassination. Lovelady identifies himself immediately.
HSCA: If a movie camera showed you farther in the center of the doorway than that person there [i.e. Lovelady in Altgens, who appears, due to the deceptive angle, to be well over to the left/west of the entrance] would you still identify that person as being yourself?
LOVELADY: Sure would. I would say the other picture was not taken at the split second as the one to the left is.
HSCA: Okay, alright. If it showed two figures in that doorway at the same time, and you could positively identify one as yourself, would that have any bearing on your identification of that other figure?
LOVELADY: No, that’s still me at the left [of the] doorway.
Whether knowingly (i.e., with knowledge of the Prayer Man figure in Wiegman) or unknowingly (i.e., by pure speculation), the HSCA interviewer has preempted the very discussion we have been having in this thread:
Two Lovelady-resembling men caught on film at the time of the assassination, one over on the west ("left") side of the entrance and the other more towards the center.

HSCA: Okay, alright. If it showed two figures in that doorway at the same time, and you could positively identify one as yourself, would that have any bearing on your identification of that other figure?
LOVELADY: No, that’s still me at the left [of the] doorway.


Cue Ralph Cinque, he like Billy was not very good with numbers.

HSCA: Okay, alright. If it showed two figures in that doorway at the same time, and you could positively identify one as yourself, would that have any bearing on your identification of that other figure?
LOVELADY: No, that’s still me at the left [of the] doorway.

Hi all. I was at the AARC. I figured I might as well try it again, so I approached Buell with the
Robin Unger enhancement of the Darnell frame on my laptop desktop, and asked him

2. who the other figure was.

He said 2. was not clear enough for certain identification, but it probably wasn't Lovelady
because by that time he had taken off with Shelley for the RR yard.


I first asked him if he could identify
Prayer Man, and while he was mulling it over, I said to him, pointing
to his image,


"By the way, Mr. Frazier, is that you?" To that he
responded, "very probably ... look at the hairline." So yes, he seemed
to be in a more forthcoming mood at that point.
When he was answering questions after his talk (he repeatedly got choked
up as if withholding tears as he spoke of the events of that day)

I know and he says he was present when the shells and the rifle were found. He stood by the freight elevator while both finds were made. He saw the rifle but not the shells.

Point is he says he was fifty feet away from the rifle.
At the entrance to the elevator.
He may be full of shit, but even in a lie he does not place himself where we see in Alyea a white male in a tshirt who is possible husky and if not standing on a book carton is freaking huge.
That means it has to be Jack Edwin Dougherty.
I sure as hell hope its not Campbell as I'm fresh outta white guys at the TSBD.

Billy three shirts can't be trusted on much, but his timing may work out for having a smoke and then being let back in somehow like we see in the films Hughes and Martin with colored kid in green shirt being let back inside with an escort. https://www.youtube.com/watch?v=Jk0toNwH7rc

Here though Billy three shirts is the escort for the police.

Okay. Sure. I believe Billy.... sarcastically he says

Either Kaminski or his partner taking names had to let some of these employees get on the list or go inside escorted.
The process has not been adequately explained by the police whom conducted it.

As I watch Alyea and going up the elevator I'm wondering where is Billy.

https://www.dropbox.com/sh/dp6p2auppnjhxsv/AABBm0vee1N0JJg02gaXwHEqa?dl=0
Fresh copies that sound slightly better than what I have heard. 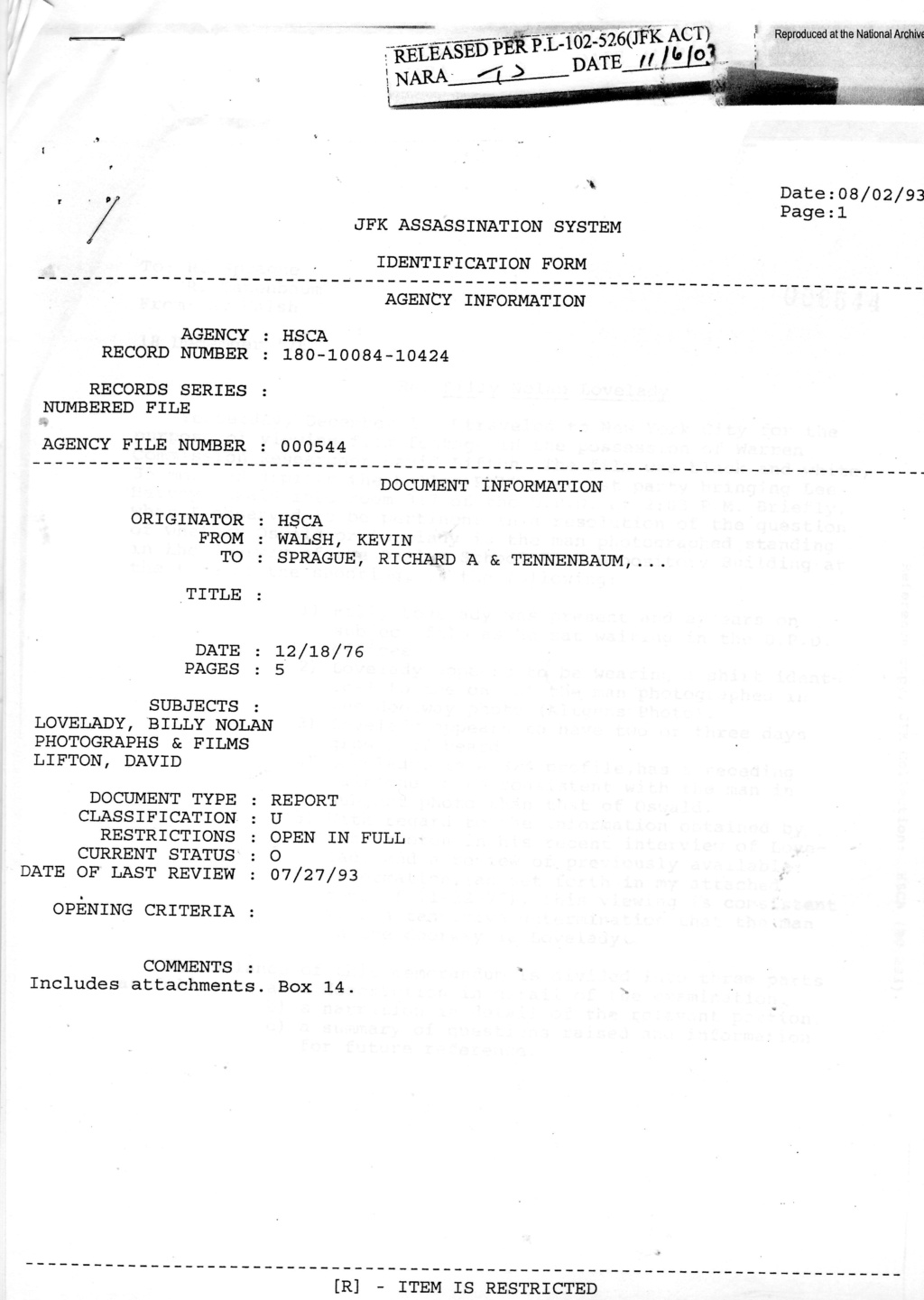 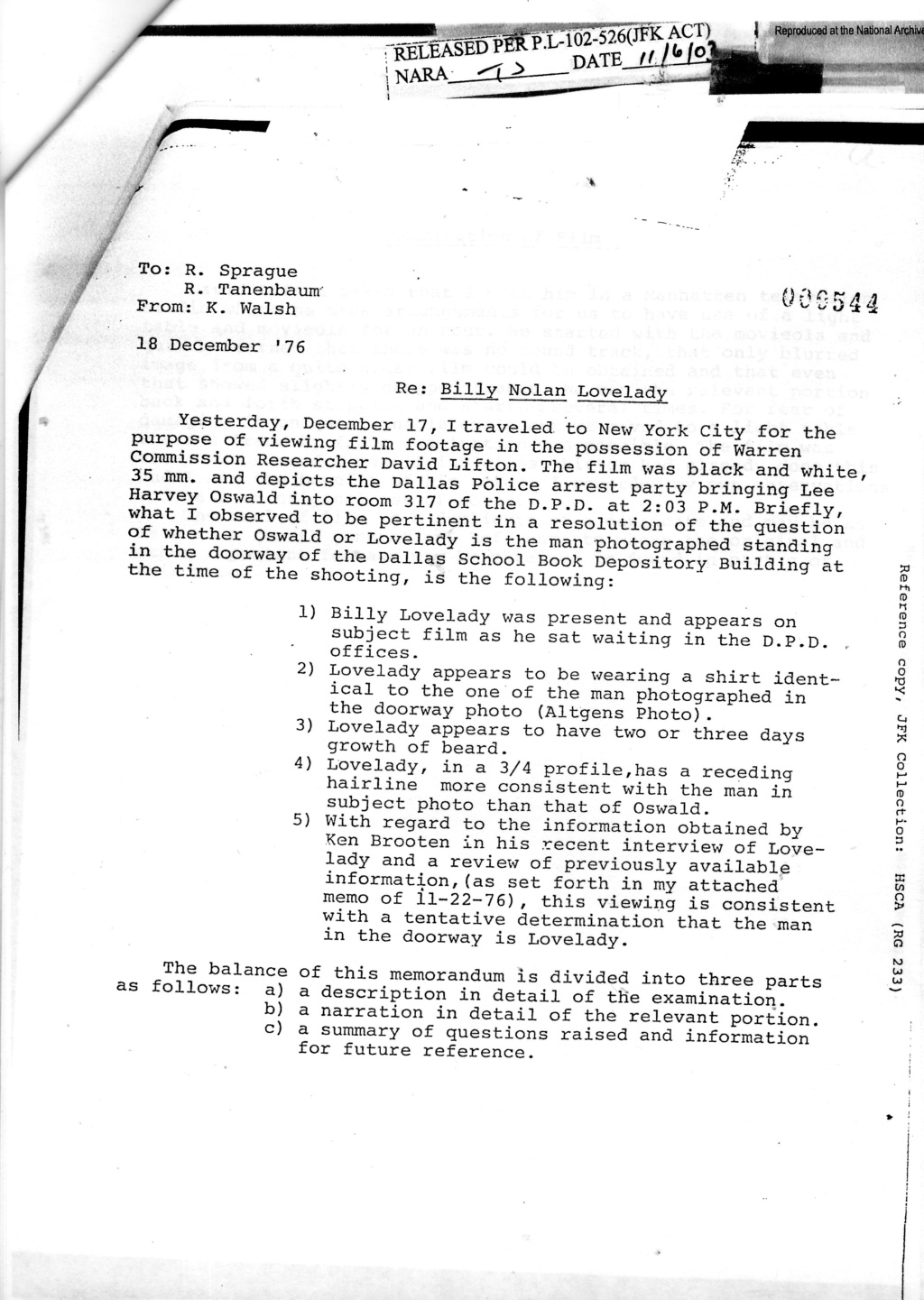 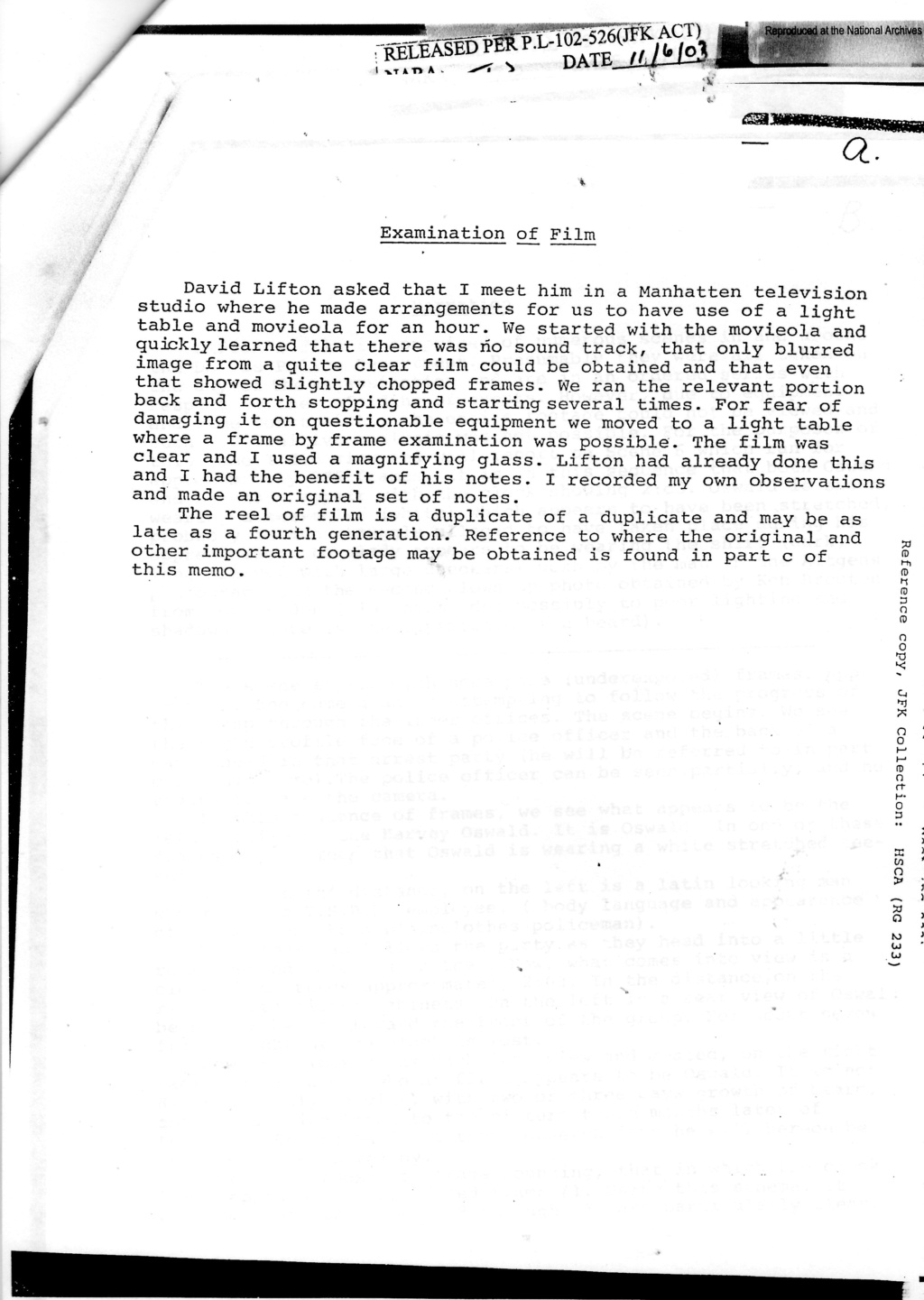 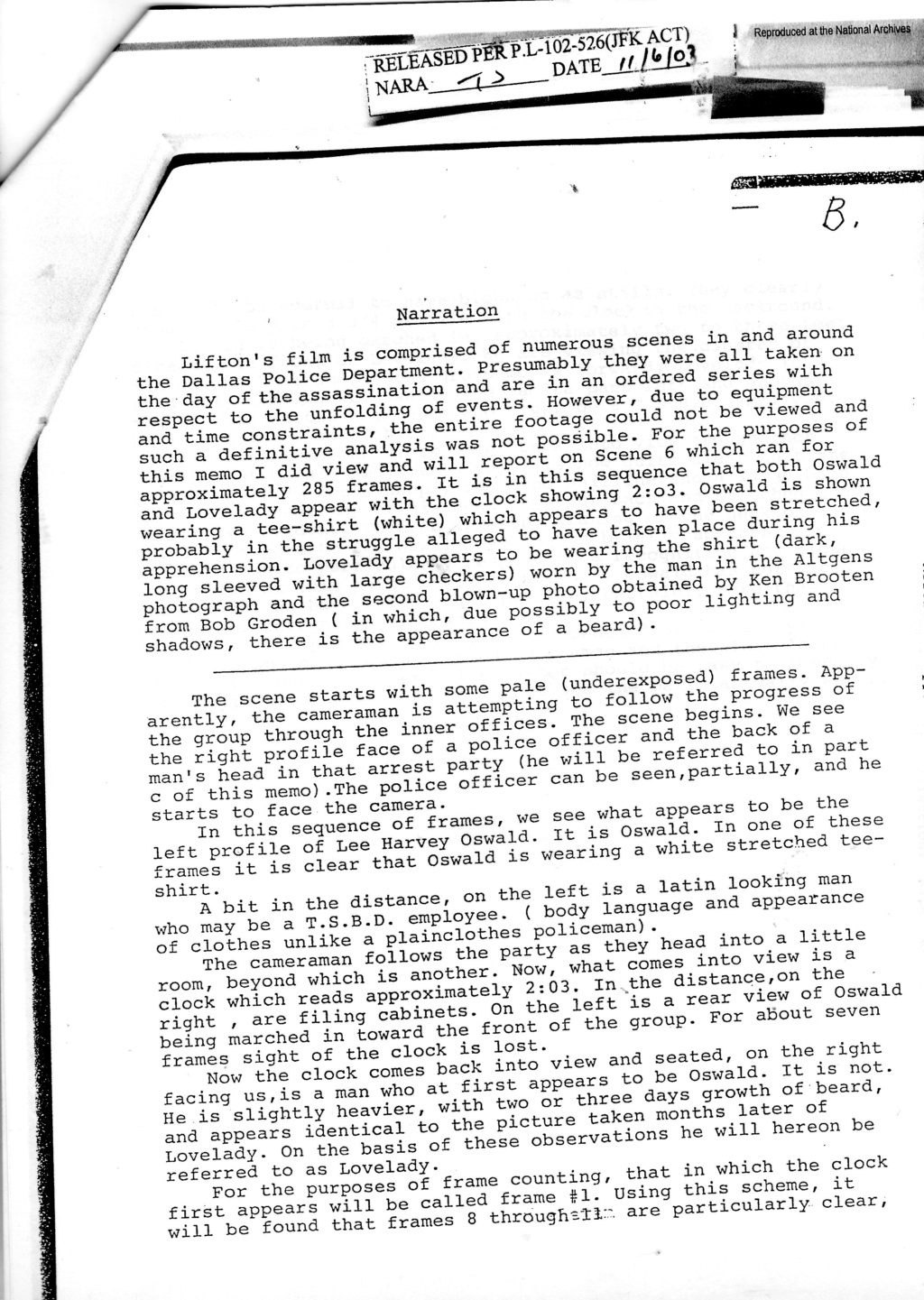 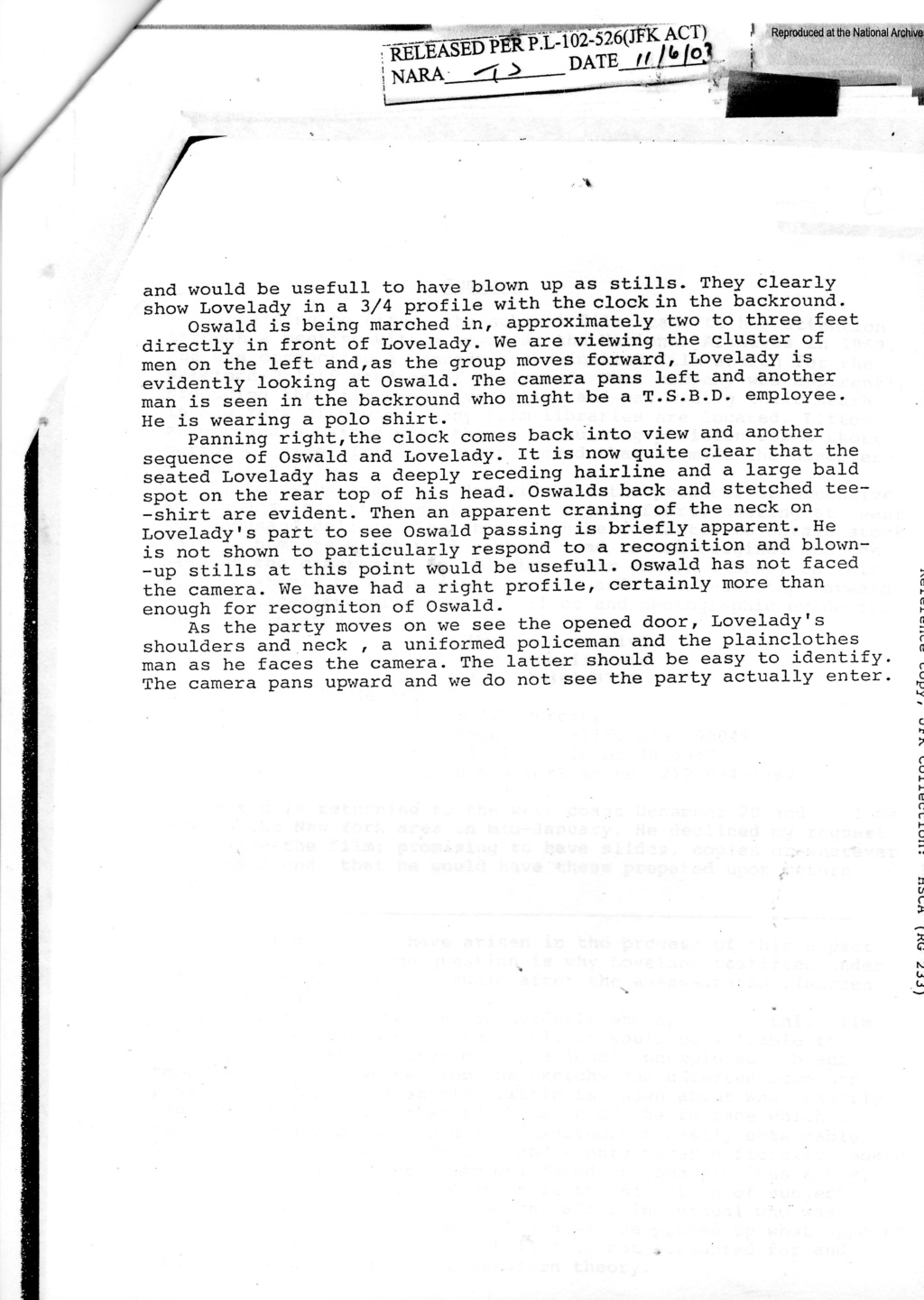 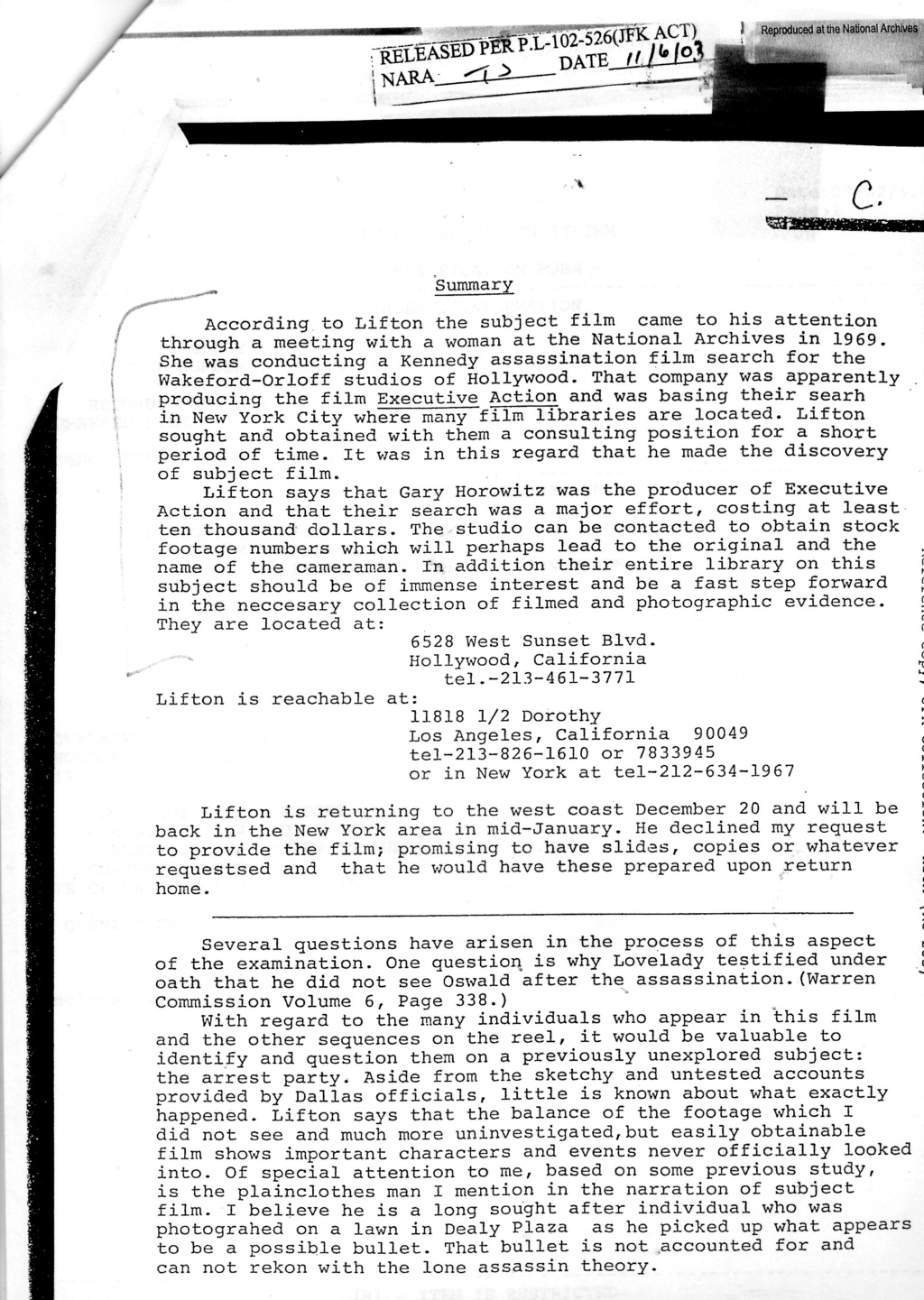 "I was standing on the first step" 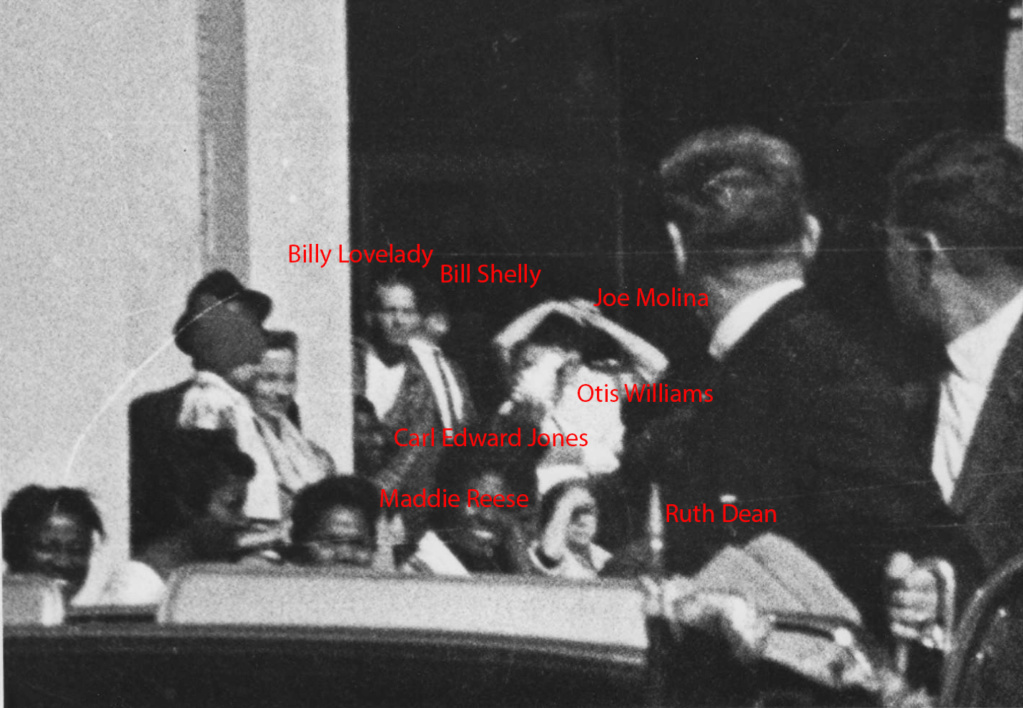 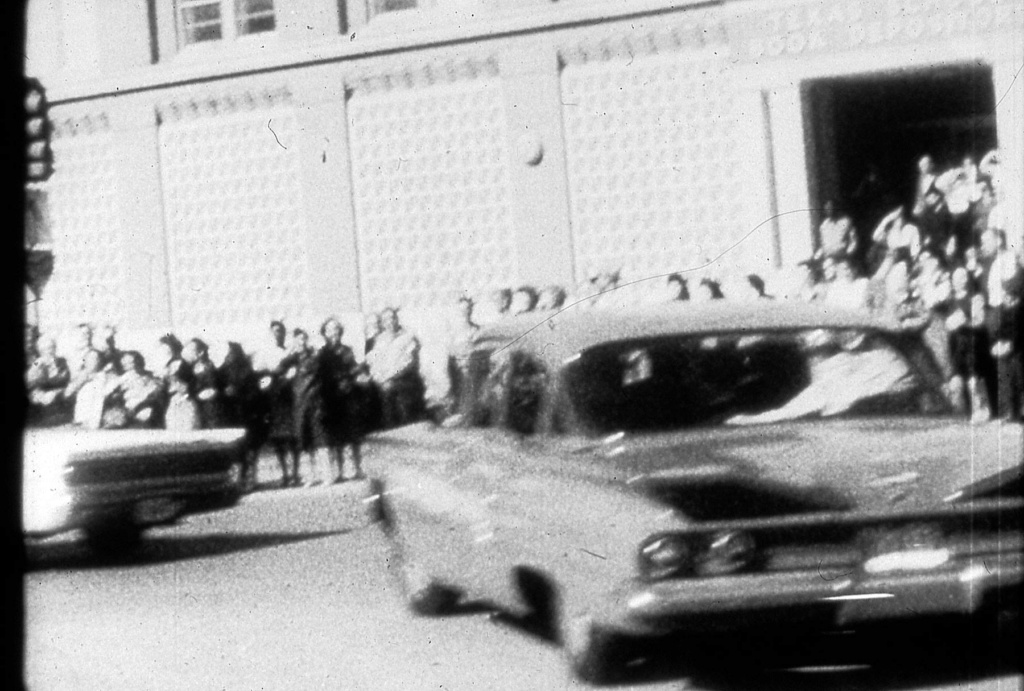