Then went outside to watch the P. parade

Year is not over yet Vincenzo....

The deniers reaction t the Hosty note spoke volumes.
From Von Peins desperate sophistry t Doyle's incoherent blather.
Combined with Marina's confirmation...( and yet again the usual suspects attempted their usual denial routine..attempting t trivialise and marginalise..and boy didn't Ralphie C Cinque show up at the right time)...one by one the objections are neutralised. No matter how hard they try they can't get Oswald out that corner and into a wig and a dress.
They can't attack the painstaking research, the meticulous case that's been assembled, so all they can do is huff and puff. Bluster, bullshit or tell barefaced lies.
It's just a blurry picture..Prayermans no better than Cinque and his debunked Altgens nonsense. Blah blah fucking blah..
Prayerman is THE litmus test. I agree with Vinny, the Hosty note has been THE breakthrough of the year. Hands down. And as Barto says the years only half done..plenty of time for the fat lady t start singing...
I can understand the LN reaction..they gotta do what they gotta do..but I've been genuinely shocked by the reactions of some of the venerable CT worthies.
What's not t get behind? The demolition of the 2FLRE combined with Prayerman is THE potential breakthrough..the gamechanger..the irrefutable proof. The chain reaction t trigger the critical mass..and look how far weaponising the truth has got us folks..endless onanistic bleating on Facebook and petty doctrinaire bickering. Next they'll be fucking arguing about the transubstantiation of Oswald or if the Second Marguerite was immaculately conceived.
I shudder t think of the diagrams Monsignor Fez will produce..
Prayerman is simple, compelling visual proof that anyone can understand. It doesn't rely upon complicated long winded prognostications that rely upon the suspension of disbelief. Most importantly it can be used t get the right people on our side. Get the people who should be interested interested.
The smart sophisticates , the next generation, kids who are as skeptical of wild eyed tin foil hatters as they are of government apologists.
It's that generation, the generation we need t energise this case, Fetzer and cos antics have completely alienated.
To see Cinque with Jerome Corsi on Infowars, with his irritating castrato squeak rambling on about the most ridiculously absurd "theories" was the absolute nadir.
And t see so called serious researchers queuing up t share the podium with Judy fucking Baker..
Anyone who doesn't get behind Prayerman can fuck off as far as I'm concerned.
They should go hunt chupacabras or strap on their EMF readers and go wander about a haunted house..
_________________
A fez! A fez! My kingdom for a fez!!
The last words of King Richard HARVEY Plantagenet III
Bosworth Field 1485

Well said Alex.
Bigfoot has been rejected for PM I hear.
It was on the GK signing autographs.
Cheers, Ed

Indeed Ed and i bet Bill Miller was first in the queue.
"Is that a relic hominid in your pocket or are you just pleased t see me?" he squealed..
I bet the thought of finding a Bigfoot pissing up against the picket fence keeps him warm at night..deep in the forests of the Pacific Northwest..
It must be lonely out there..looking for big hairy men..
Poor old Evelyn had the same problem..used t spend ages out looking for similar cryptids too..scouring the seedy dives of Sanibel Island..although she was looking for hairy men who were well endowed in other parts of their anatomy..Old Albert wasn't called the Pomeranian Pickelhauber for nothing you know...
_________________
A fez! A fez! My kingdom for a fez!!
The last words of King Richard HARVEY Plantagenet III
Bosworth Field 1485

The deniers never give up. 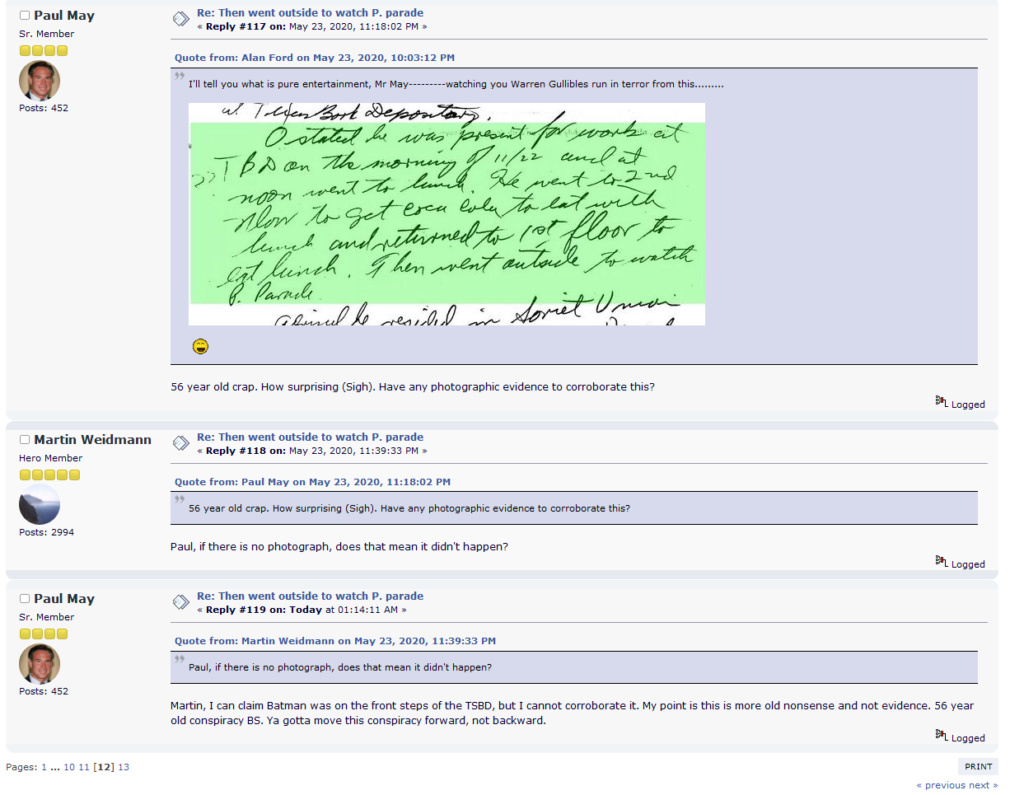 @Vinny wrote:The deniers never give up.

The only 56 year old crap comes from the findings of the DPD, FBI and WC.

Poor Pauly is flailing wildly trying to diminish it with protests of it being "old".

@Vinny wrote:Exactly Greg. The Hosty note has been quite a blow to LN's. All they can do is deflect.

Ignoring the obvious is the speciality of the stupidly irrational. They will never be convinced because their identity depends on not being convinced. Any evidence provided will be met with disregard or deflection.

We have fossils of dinosaurs, but no pictures. Clearly they never happened plus they're really old.
_________________
Release clear scans. Reveal the truth about Prayer Man. Preserve the history of the assassination of JFK.

Amen to that, Jake, and to all of the above.

These trolls don’t even know their own names, since no proof of their identity could ever be enough.