Ed. Ledoux wrote:Brilliant Stan.
Translucent paint applied to a large format neg then all taken though the IR, to be traceable to LHO.... (eventually)
Recreation photo has the indentation in leg shadow 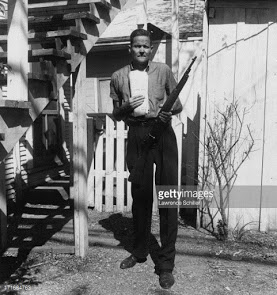 Great observations guys. I agree that it is clear that it should not be a straight line shadow.
_________________
Release clear scans. Reveal the truth about Prayer Man. Preserve the history of the assassination of JFK.

To be exact the recreation photo indentation is caused by rifle.

The positioning of the leg is angled back.
Different from 133a
This shortens the length of legs shadow and minimized the area of knee.
Still to be fair 133a shows no indentation from rifle ...arrow straight edge (across terrain no less)
Cheers
Ed

Cappel's left ankle area shows the folds and furrows of his pants and more faithful represents the natural shadows.
Although Cappel and Schiller minimized his right sides shadow ... or altered the stance as the 133a lean was unrepeatable, take your pick, it still impugns the fake 133a.
I cant imagine an argument to discount size discrepancies, wrong way shadows, extremely straight body shadows, shadows moving opposite each other, etc etc ad infinitum, except lone nuttified circular reasoning of it exists therefore its real and XYZ said its real.
Terry's find said shove your XYZ up your AZZ
Cheers,
Ed 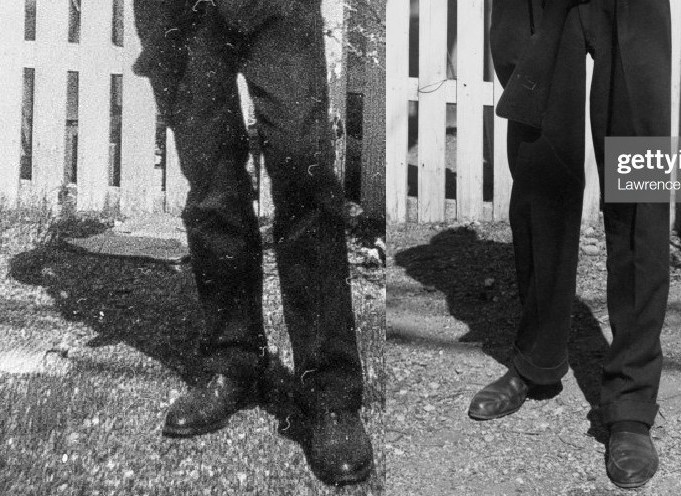 1  501 Elm Street is the Dal-Tex Building. Since the two photos and their corresponding negatives were said to be found inside a “packet”, perhaps that packet had an identifier listing this address. Did the Dal-Tex building have a tenant in 1963 which could process photos in the fashion associated with the originally discovered backyard photos? 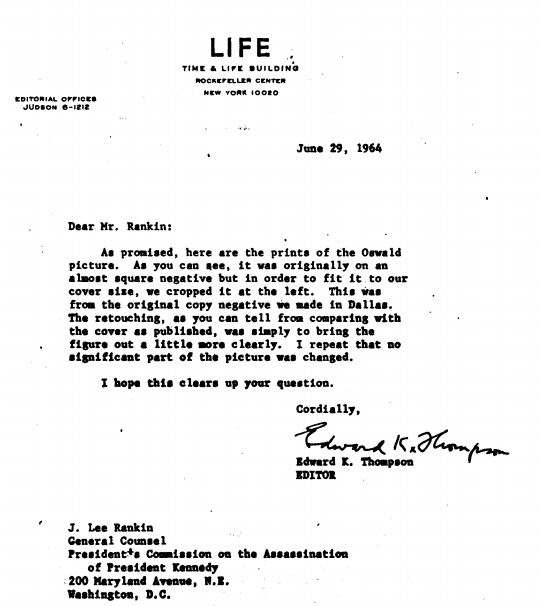 It's almost as if...there was a conspiracy to commit/cover-up a crime.

Yes especially when one looks at the evidence provided 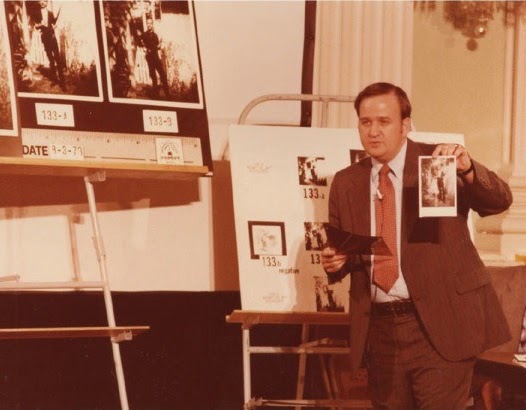 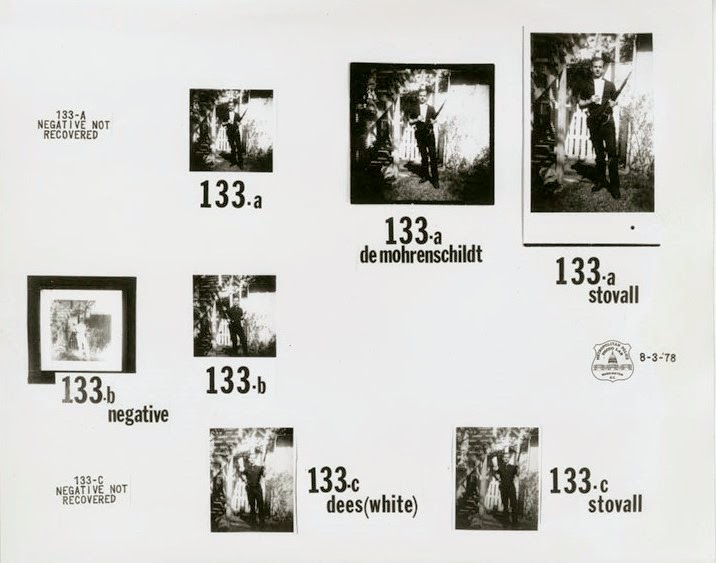 "Officer Kirk was tasked with providing the Committee an analysis of the forensic photography and photographic documentation of the JFK investigation. This included providing testimony to the Committee on Lee Harvey Oswald’s infamous “backyard photographs,” which many in the public had begun to think were fabricated. Through his work and testimony, Kirk and his team confirmed the authenticity of these photos.
Varying examples of the Lee Harvey Oswald’s infamous backyard photograph. Kirk made prints from the photograph’s original negative to present as part of his testimony. Collection of the National Law Enforcement Museum, 2015.2.3.
The archive includes copies of Kirk’s testimony to the HSCA with his hand written notes, as well as examples of some of the photographs he used to make his case."

Not so fast lawman.
Kirk actually did a poor job and his case is flimsy, unfounded and there is broken custody chains, with disparate testimony and statements. Legally Kirk should have been more discriminatory.
But when no checks or balances apply this is the end product.

Either Ed or Bart (I believe) posted a link to a Jack White hour-long presentation on the BYPs and I watched the whole darned thing.

Very interesting as it seems he mentioned the problem with the shadows I noticed a couple of years back and while that one fact alone proves they were forgeries he decided to focus on two main discrepancies:

1 - the erroneous chin and the probability that it proves the same head was pasted on each photo, and

2 - the odd stance Oswald has in the photos... he claims no one can stand like that.

He mentions off-handedly the relation of the shadows on the ground and the fence as well as the erroneous proportions of the papers, the gun, and Oswald himself but seems to push all of that aside for the very nuanced evidence that he supports.

Why marginalize the most obvious sound undeniable scientific evidence and instead rely on the touchy-feely of the stance and the "face doesn't look right" claim. One was recently disproven by some jerk in a studio and the other relies far too heavily on whether of not the viewer can see the obvious artifacts in the manipulated photos - and not everyone can.

I prefer to leave the fuzzy logic and opinion-oriented crap off the table.

Imo he was trying to pin it on another 'White' and that chin fit Roscoe.
He was trying to prove an easel was used for rephotographing and they were tilted in that process. Thus the lean.

Of course recent posts on FB groups has shown a chins appearance is affected by the light sources angle, but this was refuted by the HSCA in relation to the BYP's.
https://www.google.com/url?sa=t&source=web&rct=j&url=https://miketgriffith.com/files/fraud.htm&ved=2ahUKEwiW7b-Y4snkAhXXpZ4KHYm4AyQQFjAOegQIBhAB&usg=AOvVaw1hSoP4XvEliLE8qxIfCkOn&cshid=1568240140427
Oh and Greg pointed out that Lee holding a baby would act as counterbalance... thus the inscription to junie from papa(?) as a remembrance of father and baby daughter together.

The powerline shadows he just didnt go into enough to convince anyone as you had done Terry.

One point he made in testimony was:

WHITE. I don't have too much to say except to thank the committee. There was one area of questioning which I had hoped to get into, which because of the shortness of time before lunch I was not permitted to go into. That is the question of the DeMohrenschildt picture. The DeMohrenschildt picture shows a much larger amount of background around the edges than any of the photographs, 133-A, B or C. To me this indicates that the DeMohrenschildt picture is printed full negative. In fact, we can verify this because it is printed with a black border around the edge, the black border being the clear area around the edge of the negative. According to the FBI, the picture, CE-133-B, was identified as being taken with Oswald's camera because it could be matched to the film plane aperture. Yet if the DeMohrenschildt picture shows a larger background area and it is taken from the same camera viewpoint, then 133-A, B and C have all been cropped and, therefore, if there is more background area in the picture, then it could not possibly be matched to the film plane aperture. Other than that, I have no additional comments.

133a Dem is the smoking gun of images.

Your powerline shadow find was the bullet that killed the BYPs.

Cecil W. Kirk and Calvin S. McCamy failed to address all issues and failed to show they are NOT fake. By all accounts they actually proved in some instances they were fakes, nose shadow for one.

Terry I will always credit your independent analysis as the real shadow interuptus extraordinaire!

Sheet film...
Another nail in the Imperial Reflex coffin
Imperial took 620 or 120.

FBI Lab Report, with thanks to Malcolm Blunt.
They should have noticed the buckle difference. 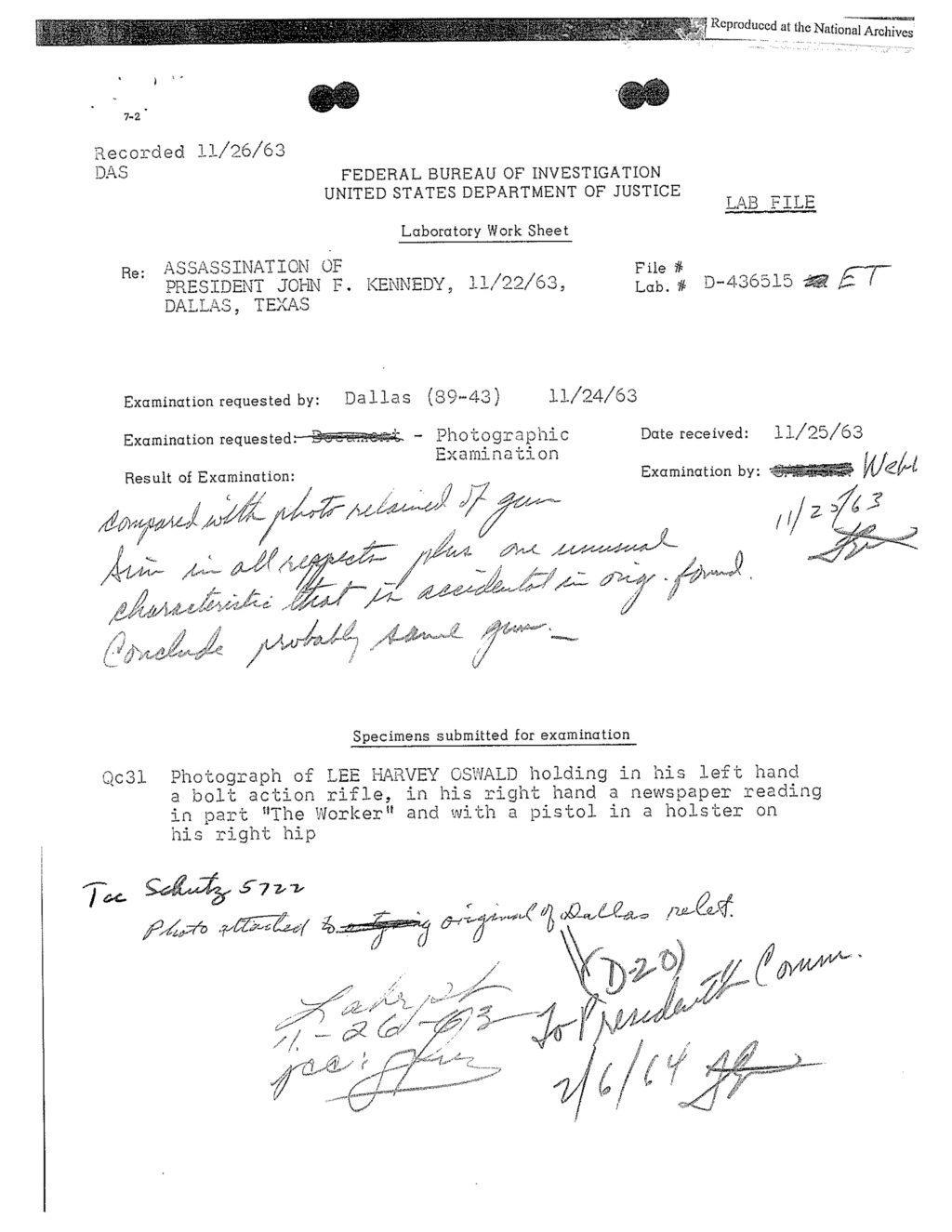 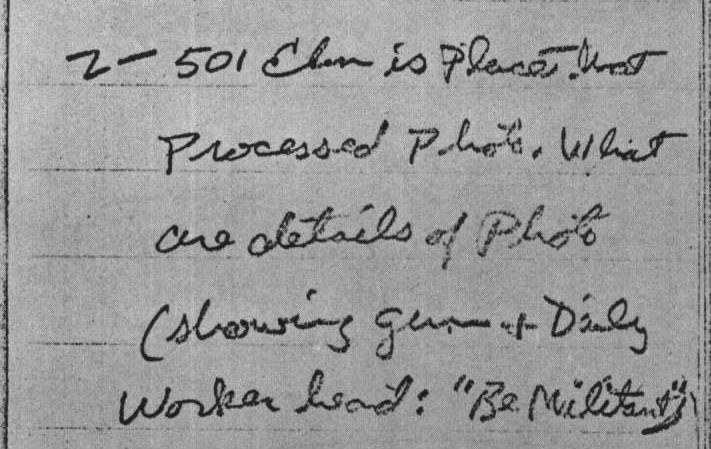 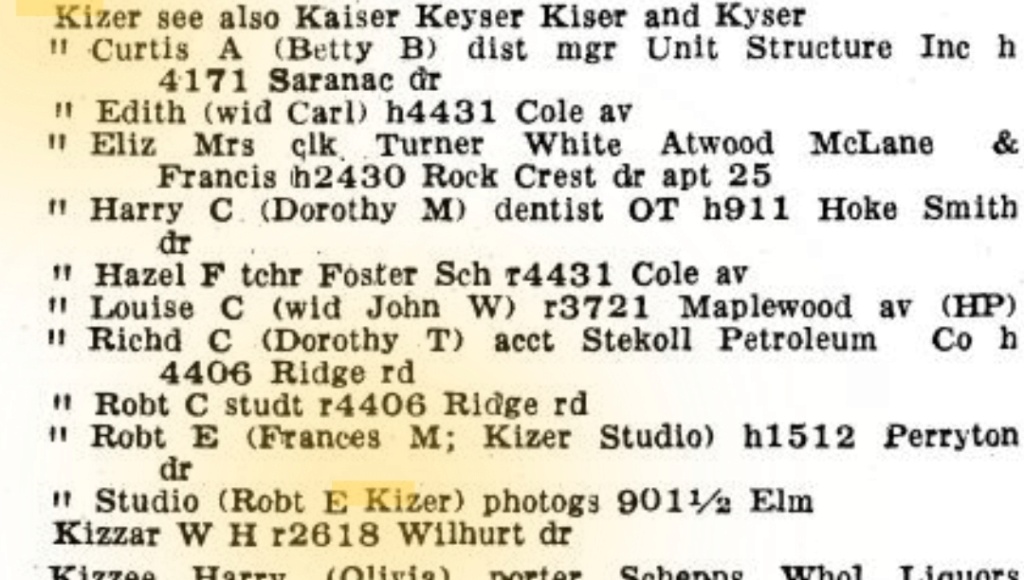 Robert E Kizer was a commercial photographer in Dallas with skill and equipment in 1963.

The following is an image essay describing modeling work I've done in analyzing the power line and LHO figure shadows in the back yard. 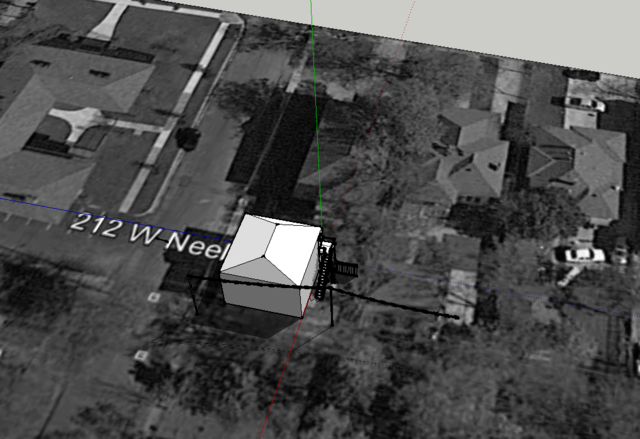 Here is the model on a Google map. It sits on the Neely house. A feature of Sketchup is that one can geo-locate the model. As a result the shadows in the back yard can be generated for every minute of daylight on every day for the entire year. 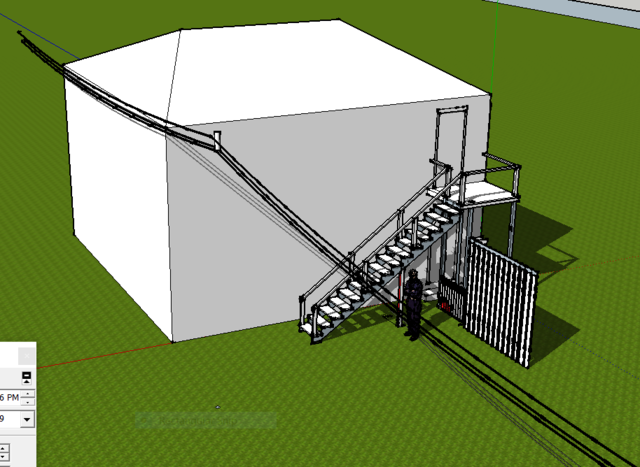 Here you see the model closer in. I've replaced the google map with a green grass ground cover, but the geo-location is the same. Note the wires hanging in the air as if by magic. It's the wire shadows we care about, not the poles.

Above we have the wires as they were back in those days. Today they are in a different location, on poles further away from the house.

All of the dimensions in the model are careful approximations based upon the google map scale, and upon photos showing apparent ground level changes, typical floor to floor heights, typical door heights, and stair construction technique observable from the variety of photos available on the internet. I do possess the types of construction knowledge needed for purposes of making these kinds of inferences. That said, the model isn't perfect. But it was useful for making a point in studying the back yard photos. 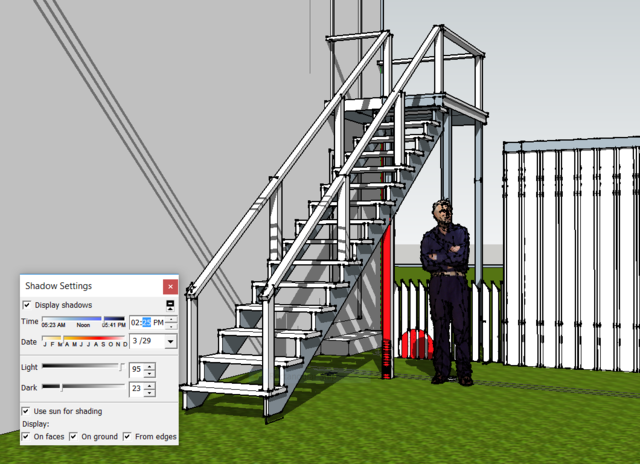 Above is at 2:25 PM on March 29, which was when I was able to get a decent match for shadows close to what we see in BYP's. One thing I struggled to get and never did succeed was a decent correlation between the post height and LHO's height. Could be my fault, could be something more suspicious, but I know this issue has been brought forward by others in the past. 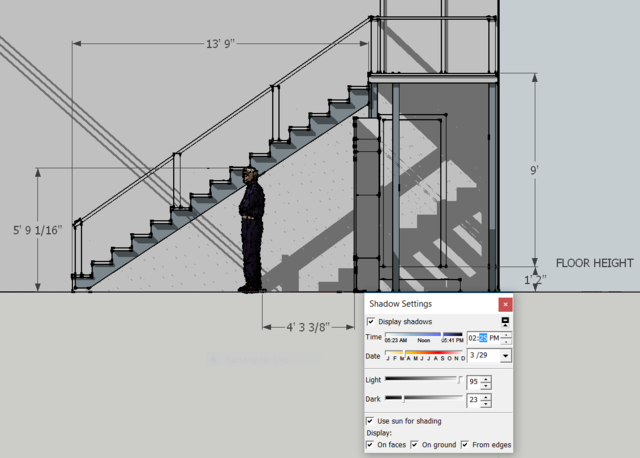 This is sequencing one minute at a time. I was amazed to see how far the shadows traveled up the pole (six inches) in just three minutes. Also note that as predicted by Steely, the head shadow goes UP the fence too, but much more slowly than the wire shadows. The speed of the wire shadows is due to the distance and elevation of the wires. These shadows are traveling toward the horizon faster than all the ground based shadows are. Point of order: Terry Martin gets the credit for the original discovery of this shadow anomaly.

So this leaves us with two possible conclusions: One, the photos are faked. Two, LHO moved closer to the camera within the time span of only several minutes between shots. Let's see how we must move LHO in this model in order to render a similar shadow change as observed in the BYP's: 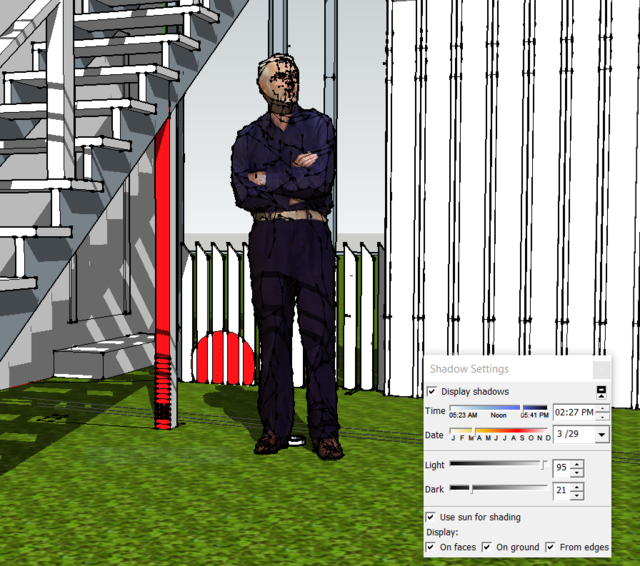 Here it is at 2:27 as that time looks most similar in terms of wires on the post. I'm focusing here on the bottom wire shadow and ignoring the fact that the upper two wire shadows are much higher on the post in the BYP's. The point stands either way. LHO is now way too far forward of the wire shadows on the ground. He is even taller compared to the post. (For those who are interested, the field of view setting for the perspective views is 30 degrees). 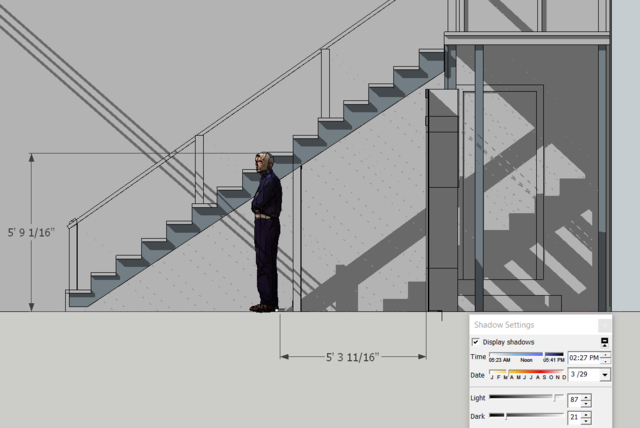 Here are the dimensions and time stamp for the preceding view. The difference in distance from LHO to the fence is now 12" further from the fence.

Thus eliminating the possibility that LHO moved closer to the camera, my final conclusion is that the photos are apparently faked.

Super Mick! Thx for reposting this.

I recently suggested using the power line shadows intersection where they meet the body shadow,,,
since the shoes/ground arent always in frame like 133b.
A study of this may be a secondary proof.
Cheers!

Jake Ive been looking at the fence and the shadow of the body.
I noted a possible discrepancy if it can be called one.
The measure of distance between figure and fence.
The fence is not shown flat against the support post.
I see in the diagram its 3-4 inches away when all photos, videos etc show it flush with post.
Back at the hash mark for the post.
Instead of 5 foot 3 + Inches would it be 5 foot 6?
Much thanks and a big mahalo! 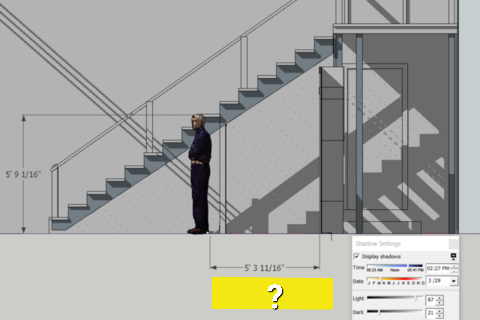