HOLLYWOOD - Meet Tania Velia—the Iron Curtains answer to Marilyn Monroe. Tania, a 22-year-old brown-eyed blonde beauty, it only two years there that she was a political im . Endowed with all the physical assets that made Monroe famous. Tania makes a statement migrant An aunt who already lived in the United States helped her to get to this country. Tania, who had been an actress country. in her own country, mode In Yugoslavia." she insists, "living around New York singing in night clubs. She came to Hollywood Of course that was a few years' ago. when she was a railroad section hand. "It’s very difficult for a girt to he pretty while swing a pick and shovel," she admits. Magazine photographer named Eddie Rocco became her business agent and took her to Warners. The studio now has her under option and is giving her voice and...

Some discussions of The Picture

This is in the exhibit.
Is it Rocco?

or is it Seymour Chazin

Nice work Ed! Cannot seem to find Rocco's pic anywhere. I wonder if that is him in the doc you posted.

Yeah he was in a 1944 film.
I can screen grab a scene where his character is a horse doctor.
May be closest we get for now.

Is it just me and my imagination or is it possible that the "Oswald" figure in the backyard photo's looks a little like it does not want to weight bear on the left leg.

I suffered a significant trauma to my left leg many years ago, and to me this was exactly the stance I'd assume when standing still for many years after the actual accident.

Could be as the leg is always favored Mick!

Here is Eddie Rocco in 1944 film The Great Mike

Eddie Rocco does look like Lee... except a square chin. Hmphf!

Imperial reflex cameras had 3 1/2 x 3 1/2 negatives.
http://historiccamera.com/cgi-bin/librariumadmin/pm.cgi?action=app_display&app=datasheet&app_id=2355
What am I missing? Something about a "copy negative", maybe?
_________________
Release clear scans. Reveal the truth about Prayer Man. Preserve the history of the assassination of JFK.

Am I missing something,... Similar?
The Fbi used 133 A and B in the report.
Isnt this admitting the SS had C?

"Prints and Copy Negatives
The simplest way to duplicate negatives is to make a print and then to photograph the print using a large-format camera (4" x 5" or larger) to produce a copy negative. The advantages of this method are cost and convenience. Most museum darkrooms or local photo labs should be able to do the work with little or no investment in equipment. Further savings may be achieved by using already existing prints for copying. Where no original negatives exist, copying existing prints is the only available option. The disadvantage of this system is loss of detail in both the print and the copy negative. A print always has detail loss and a compressed tonal range when compared to the original negative, and further detail is lost when the copy negative is made.

Direct Duplicate Negatives
Eastman Kodak Professional Black & White Duplicating Film #SO-339 is designed for directly duplicating negatives. This is a one-step process yielding a negative from a negative. Duplicating film has high resolution, minimizing loss of image detail during copying. Also contrast can be manipulated during duplication to salvage some problem negatives. However, since the film is blue sensitive, minimizing staining can be problematic. This film can be difficult to work with, making accurate tone reproduction hard to achieve. Contact-printed direct duplicate negatives are laterally reversed, therefore the image can mistakenly be printed backwards if the photographer is not aware of the nature of the material.

If the original negatives are disposed of, the duplicate negatives become the masters. This is a major disadvantage since whenever an image is needed the master is used for printing, exposing it to the likelihood of eventual damage.

Interpositive Duplicate Negatives — Contact Duplication
The original negative is contact-printed onto film to produce an interpositive (a positive image on film). The interpositive is then contact-printed onto film to produce the duplicate negative. This process provides the most accurate tone reproductions possible. Problems in original negatives can often be corrected by using selected films and filters to reduce staining during the production of the interpositive. The disadvantages of this system are the higher production costs, the complexity of the procedure, and the added storage space required for the multiple duplicates. However, this method results in two duplicates for relatively little additional cost; the interpositive becomes the master and the duplicate negative becomes the use copy."

"Backyard Photographs"
Suffice to say that there were either one (3) or two (4) negatives and two developed prints found by Detectives Rose and McCabe during their search, with other police officers, of the garage of Michael and Ruth Paine's house at 2515 West Fifth Street, Irving, on Saturday 23rd November 1963. (See Note 1.)

In the words of Detective Guy Rose: "Yes; I found two negatives first that showed Lee Oswald holding a rifle in his hand, wearing a pistol at his hip, and right with those negatives I found a developed picture - I don't know what you call it, but anyway a picture that had been developed from the negative of him holding this rifle, and Detective McCabe was standing there and he found the other picture - of Oswald holding the rifle." (5)

Unfortunately, the testimony of Detective John A. McCabe, who has been named as finding one of the most vital pieces of evidence in the investigation, was not considered of sufficient importance to be included in either the Commission Report or its Hearings. Oddly, his name does not appear on any of the property receipts for items seized during that search (6). The Paine house was in Irving, where the Dallas Police Department had no jurisdiction, so it was obligatory that somebody from either the County or Irving Police Department was present. Detective McCabe was a member of the Irving P.D. McCabe does get a few lines in an FBI Report dated 26th March 1964, when he describes his part in that search but for some inexplicable reason, he fails to mention finding the photograph (7).

That same FBI Report also describes how, on 23rd March 1964, McCabe had provided a full account of his finding of the Imperial Reflex camera (CE 750) which was later claimed to have been used to take the "backyard photographs." However, he had neither seized nor mentioned it as he did not consider it to be of "evidentiary value." As we now know, that camera was to remain in a box in the Paine garage until 8th December 1963 when Robert Oswald took possession of the residue of his late brother's property and found it. He later realized that it could be relevant and handed it to the Dallas Office of the FBI on 24th February 1964 (

CE 133-A and CE 133-B were found in the Paine
garage along with their negatives.

Two further "backyard photographs" gained some notoriety when they were discovered separately in later years. The first came to light when Oswald's friend George de Mohrenschildt returned from Haiti in April 1967 and found the third "backyard photograph" in a piece of luggage which he had left in storage during his absence (9). On the back were two handwritten inscriptions: "To my friend George from Lee Oswald - 5/IV/63" and, in Russian Cyrillic script: "Hunter of fascists ha-ha-ha!!!"

Some researchers believe the first of these inscriptions is in Oswald's handwriting, but the style in which the date is written has long caused general concern. British researcher Anthony Summers states: "A researcher's check of the dozens of letters and documents written by Oswald has produced not one example of a date written like the one of the back of the photograph." (10).
However, in the course of researching this article, Melanie Swift has discovered a postcard written by Lee Harvey Oswald (in Minsk) to brother Robert (in Fort Worth) on which the date is written as 10/V/62 (11). In it, the message refers to Lee's daughter June as being "almost 3 months old now" and since she was born on 15th February 1962, that date (10/V/62) is obviously 10th May 1962. This provides a precedent for Lee writing a date in this "European" style with a Roman numeral indicating the month. It also tells us that the inscription on the de Mohrenschildt "backyard photograph" was written on 5th April 1963 - a date, incidentally, just five days prior to the attempt on the life of Major General Edwin A Walker (12).

133-A deMohrenschildt back of photo (HSCA Exhibit)

The identity of the author of the second (Russian) inscription remains uncertain. It has been suggested that Marina Oswald may have been the writer (13).

Thanks for the answer to what a copy negative is Ed.

You've gone on to ask a key question about SS. Nice going. Thanks Bart for posting.
_________________
Release clear scans. Reveal the truth about Prayer Man. Preserve the history of the assassination of JFK.

Its just that Ive looked at Secret service holdings and Item 40 never materialized
Perhaps you can have better luck finding Item 40 in their files.
Anyone know what exactly Item 40 is?
Cheers, Ed 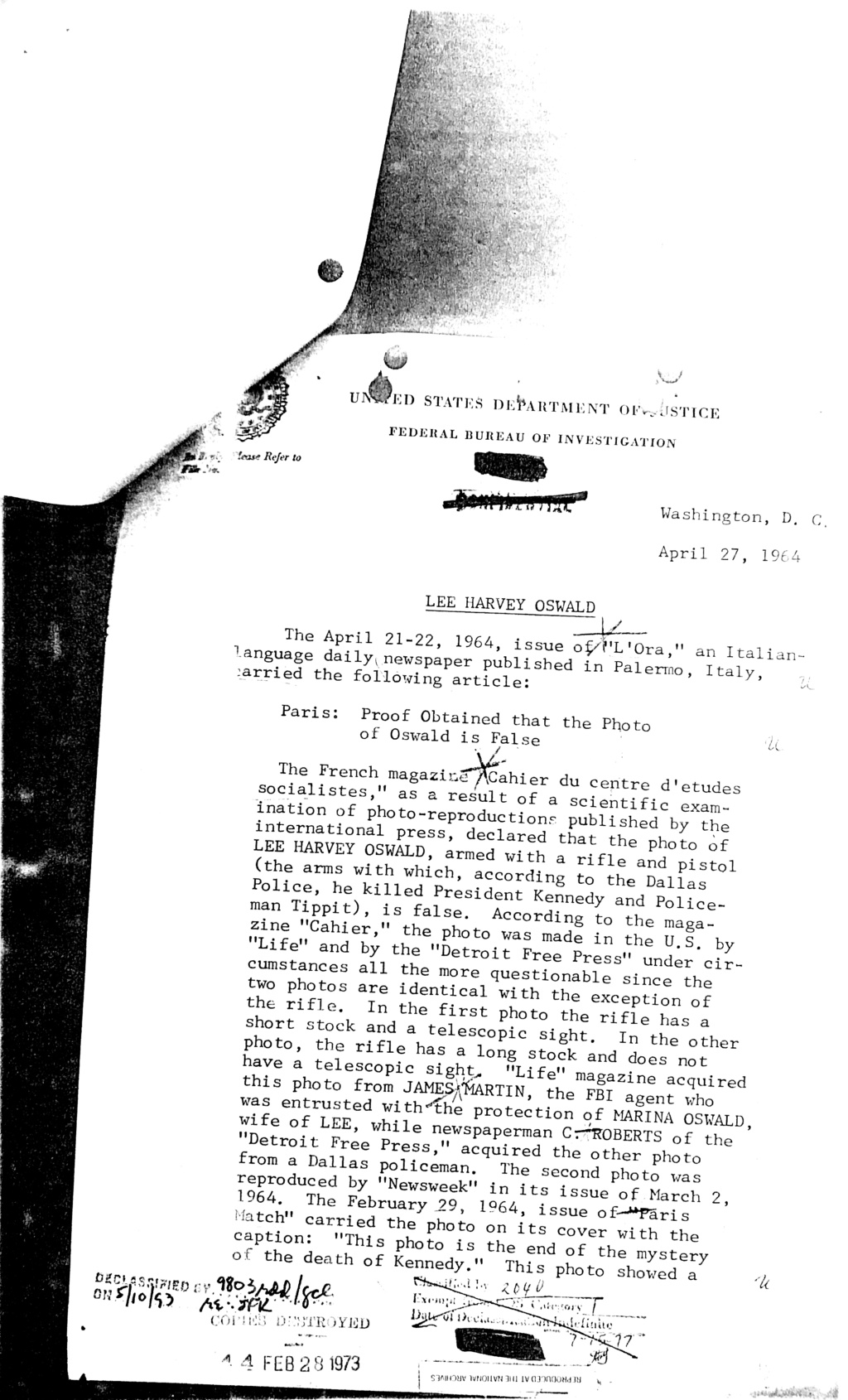 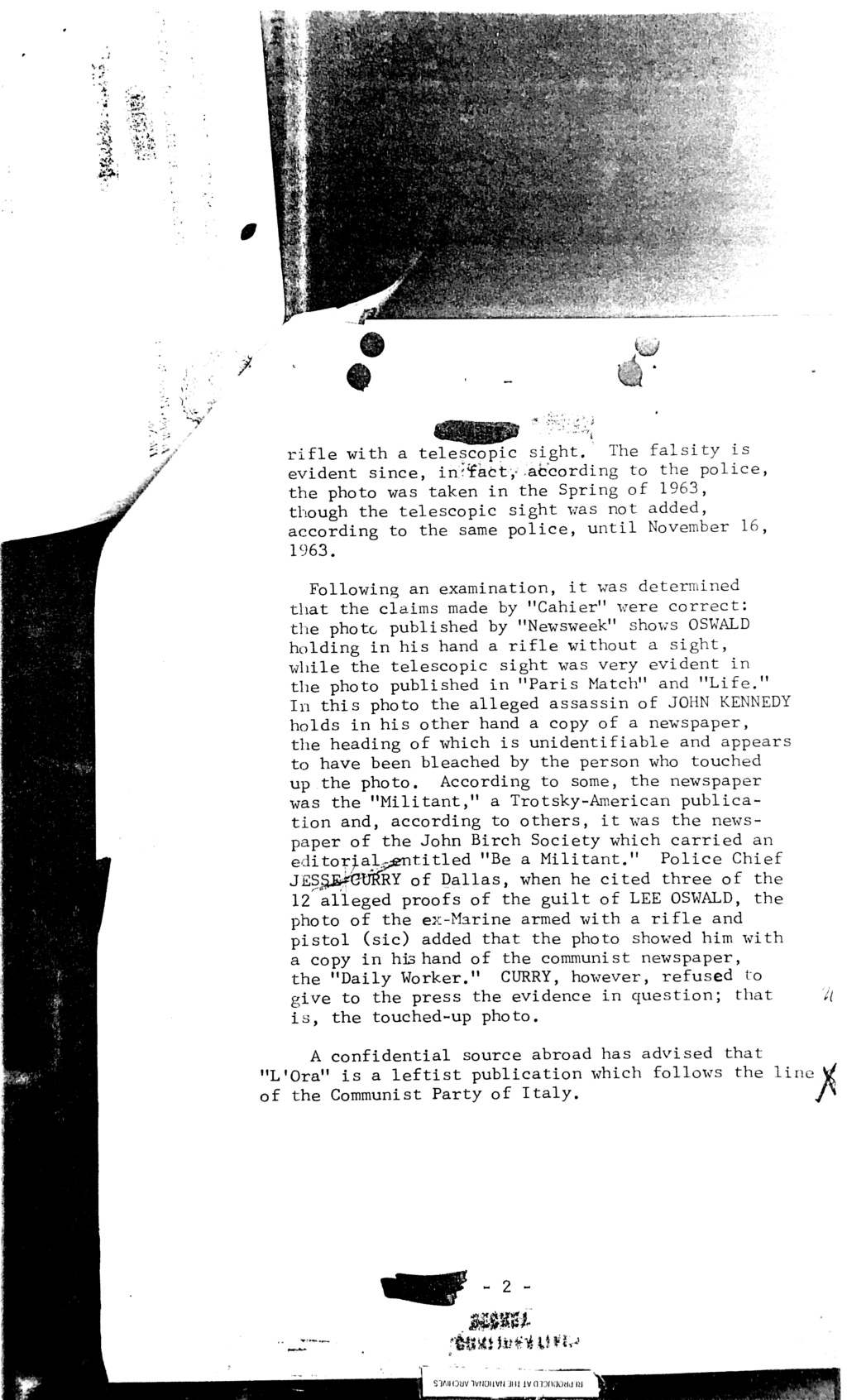 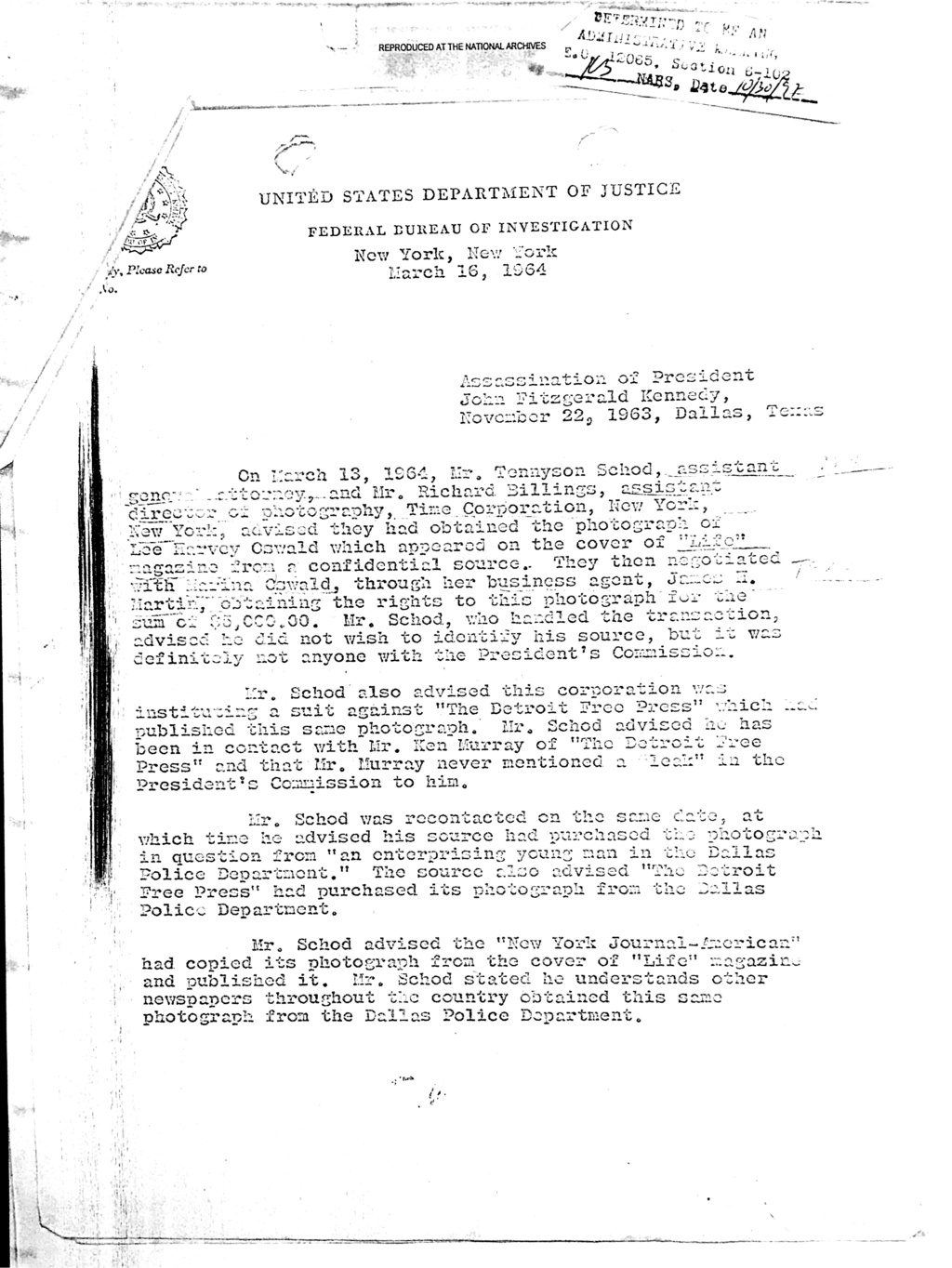 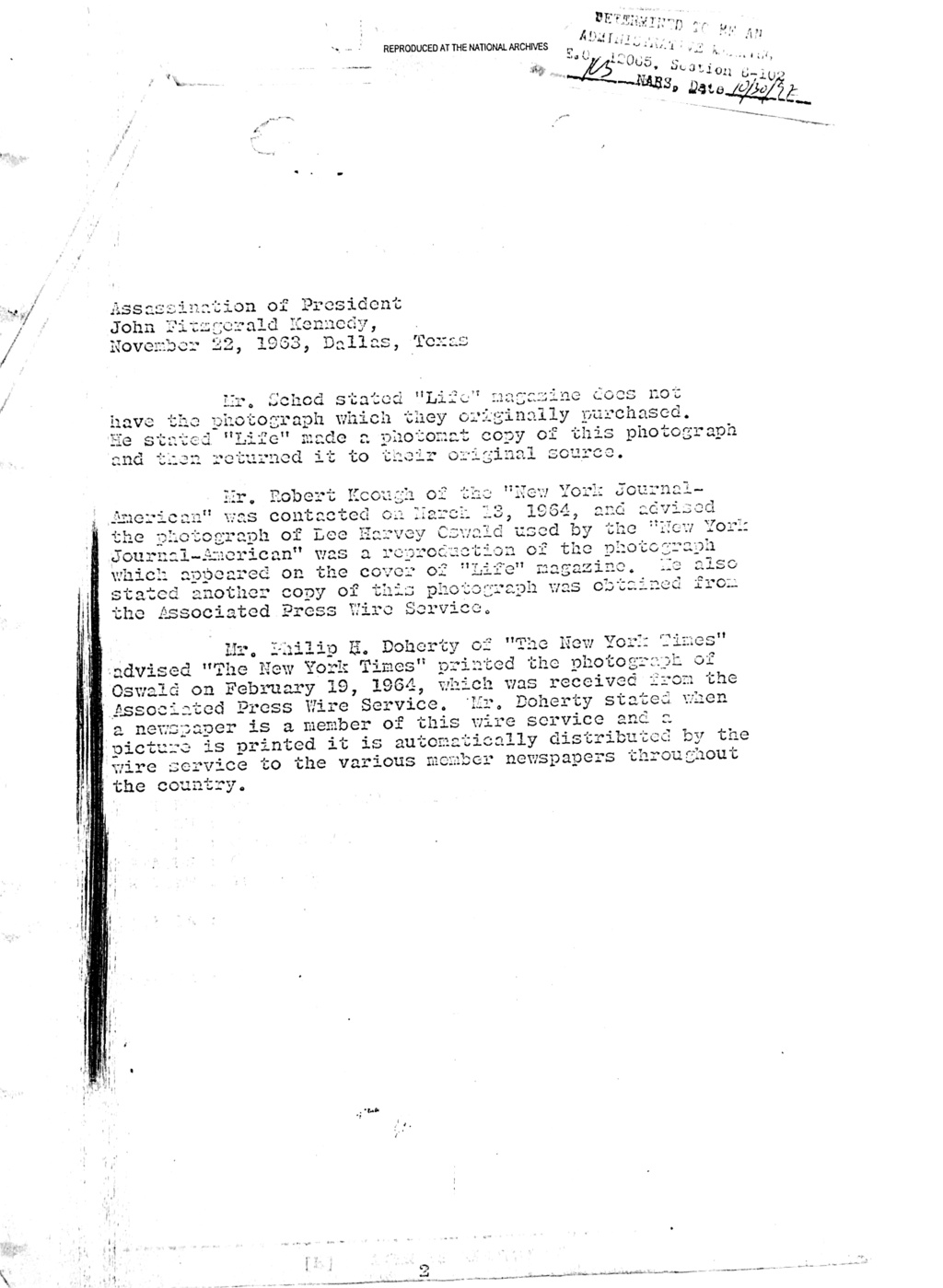 How boring! This is what we are up against. 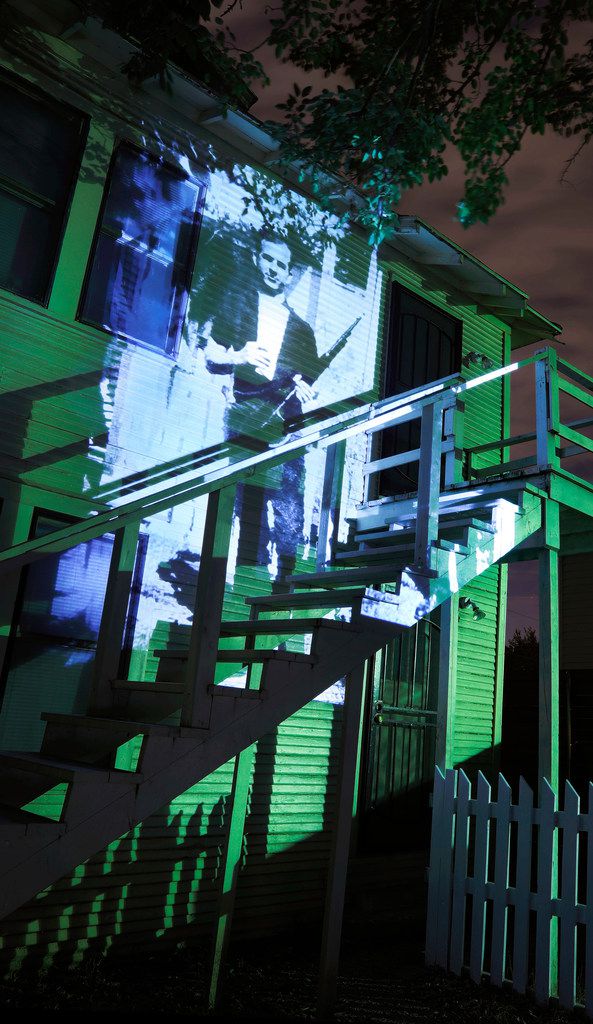 
The owner of the house at 214 W. Neely is listed in Dallas County property records as 1122 Holdings LLC. Officials for 1122 Holdings declined to be interviewed but did permit photographs on the property.


Speaking of, one that was taken in the backyard of 214 W. Neely is forever chiseled into infamy: It is a chilling black and white image of a smirking Oswald, holding his rifle, his handgun strapped to his side, taken by Marina in the spring before Kennedy died. It is one of history's darkest examples of a grim foreshadowing.


Michael Granberry, Arts Writer. Michael Granberry was born and grew up in Dallas. He graduated from Samuell High School in Pleasant Grove in 1970 and from Southern Methodist University in 1974. Between his junior and senior years, he interned at The Washington Post during "the Watergate summer" of 1973. He spent 19 years at the Los Angeles Times before returning to Dallas.


An Arts writer, on this story. Must've been a slow day in Arts news hey.

We're lost in background noise to the media's conventional WC tropes. Try as we might, Prayer Man doesn't get the attention it deserves. One day we'll figure out the right angle on it.
_________________
Release clear scans. Reveal the truth about Prayer Man. Preserve the history of the assassination of JFK.

Jake Sykes wrote:We're lost in background noise to the media's conventional WC tropes. Try as we might, Prayer Man doesn't get the attention it deserves. One day we'll figure out the right angle on it.

It's hard though when we have the same words written year after year. I mean look at the following, it is so very sad. This is not reporting, it's an indulgence from someone whom normally reports on an upcoming production at the local theatre.

It is a chilling black and white image of a smirking Oswald, holding his rifle, his handgun strapped to his side, taken by Marina  in the spring before Kennedy died. It is one of history's darkest examples of a grim foreshadowing.


Really! Researched? No! Just some flowery nonsense repeated from some book he may have read on the subject. Shits me to tears!
Smirking friggin' Oswald.