The sleight of hand used to get to that conclusion:

1. Armstrong ignored the fact that in 1963, both neighbors (Bell and Carleton) stated that all three kids were living with Marguerite on San Saba.

2. In 1963, Bell had them living there in 1947 and Carleton had it has somewhere between 1945 and 1947.  Added to that, records of Tarrant County show that Marguerite purchased the place on 7/7/47. But they are also misreading those records. She did not move in as claimed. In fact, the book of the myth shows that Armstrong new very well that she never moved in.

From page 25 of the good book

On July 7, 1947 Marguerite C. Ekdahl, with a $1500 cash down payment, purchased a new home at 101 San Saba in Benbrook for $3950. 74 Tarrant County land records show that Marguerite Ekdahl leased her house to Buster L. Murray on August 1, 1947 for one year at $50 per month. 75 This is the only Tarrant County record relating to Buster Murray.

For reasons that should be obvious, Armstrong has put more weight on witness memory than the actual county records. In short, he does not believe that anyone named Buster Murray rented it out because he is desperate to "prove" that the fake Marge and fake Lee were the renters.

Repost of the Tarrant County documents 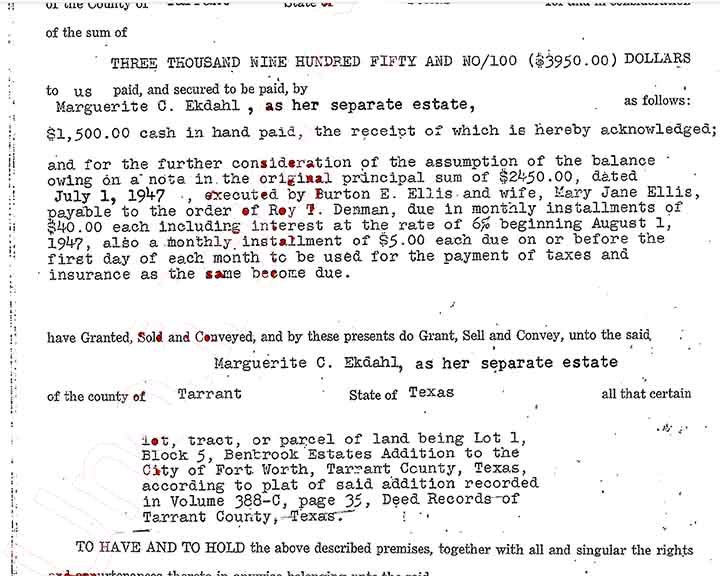 But he is also wrong about the amount she paid for it. $1500 was not just a down payment - it was the full price. The amount shown in the column under "compensation" is not the price she paid. It is the total owing on the place. The figure showing of $2950 is made up of the $1500 she paid for it plus the $2450 owed by the then current owners, the Ellis's to the previous owners, the Denmans to be repaid by the Ellis's at $40 a month. Until I found a copy of Harvey and Lee, I assumed that part of the deal had been that the Ellis's stayed there for 12 months when the reality is that Marguerite rented it out at $50 a month for 12 months to Buster Murray.

The Ellis's had only moved in on April 11, 1947 so by July it seems, they had hit a financial brick wall.  I gather much ado has been made over what was claimed to be Marge buying the place for $3950 and selling at a loss for $2750. That was not the case. She made a fat profit on it, plus some rental income.


In September, 1947 John and Robert returned to the Chamberlain-Hunt academy, while 7-year old LEE Oswald enrolled in the second grade at the Lilly Clayton Elementary in Ft. Worth. LEE Oswald was the son of the tall, nice looking woman who married Edwin Ekdahl. HARVEY Oswald was a native speaking Russian boy who was probably brought to this country during or after WWII and raised by his "short, heavy-set" caretaker/mother who also used the name "Marguerite Oswald." During the next 12 years, as we shall see, these two young boys often lived close to each other, attended the same schools, worked in the same cities, and both were in the Marine Corps.

Yes, the one and only Lee went to Lily Clayton Elementary in 1947.

The rest is just unadulterated drivel that has never been proved and the only evidence offered up so for in this long article http://harveyandlee.net/Early/Early.html is the fact that Frank Wisner recruited refugees to return to their homelands, to blend in and act as spies for the US. There is not a single instance where Wisner or anyone else, recruited an emigre to return to their homeland to blend in while pretending to be a US born citizen. Why have they never done that? Because it is ridiculous on its face.

In researching this, I have come across the San Saba saga as being referred to as a "mystery" on more than one occasion - a mystery which apparently, Armstrong solved.

No he never. He created a false mystery and solved it via the usual unreliable memories of witnesses and by misreading some documents and dismissing those that went against him - in particular the record showing Marge rented the place out for 12 months from August 1947 to the start of summer the following year - at which time she moved in with the 3 boys. Armstrong also hides from his readers that both neighbors told the FBI that all 3 boys were living there - no matter what he may have cajoled them into saying decades later.

There is no mystery here. There are no discrepancies. The only thing Armstrong has proved wrong in the official history is that the WC assumed she bought the place at the time she moved in in 1948. That was because they relied on John Pic who probably did not know she bought it the year before and rented it out for a year before they moved in.
_________________
Australians don't mind criminals: It's successful bullshit artists we despise.
Lachie Hulme
-----------------------------
The Cold War ran on bullshit.
Me

Re: H & L conclusions so far vs reality