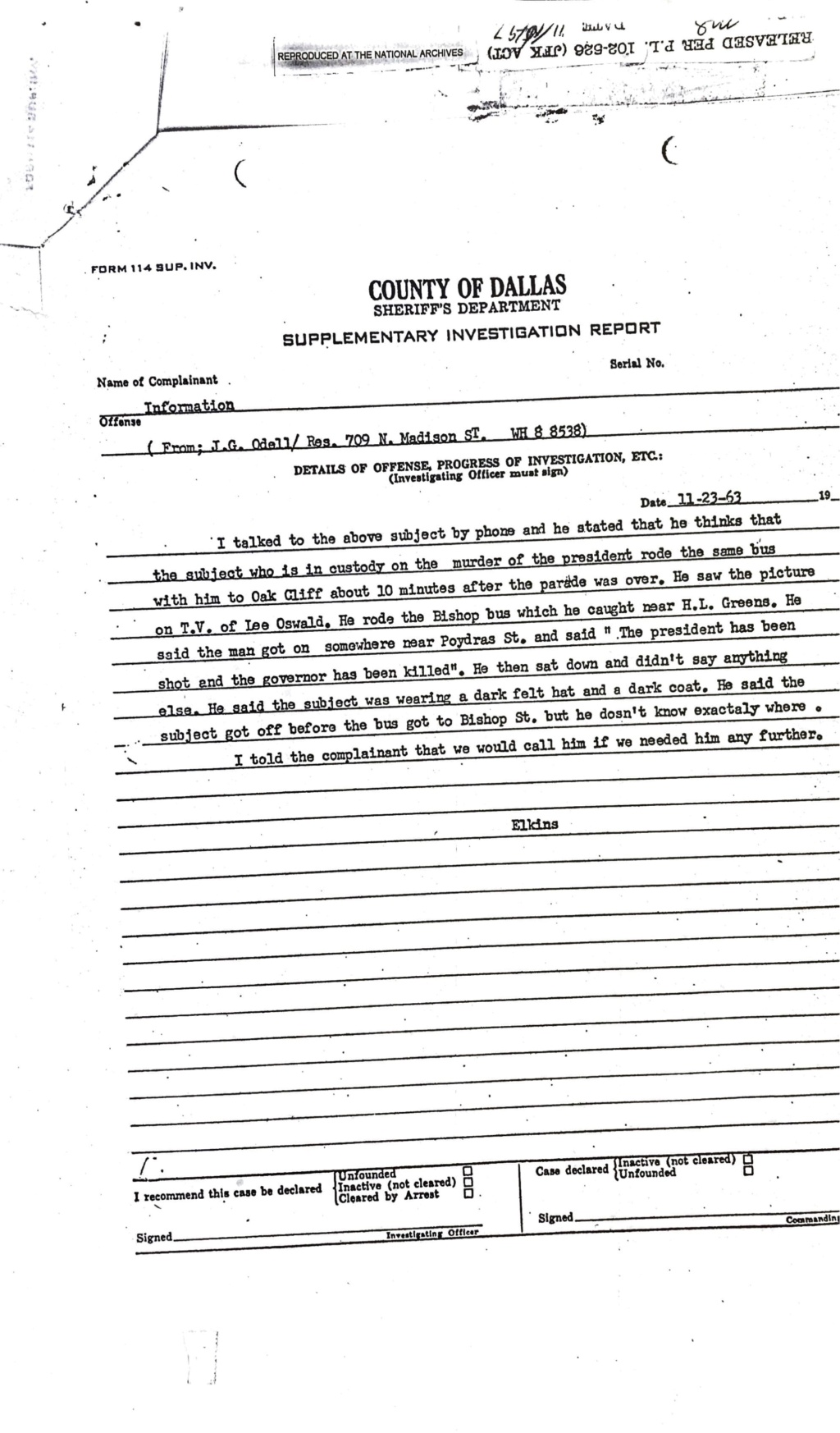 Thanks for that Bart.

They never called Odell...
The Dallas Police didn't call back Porter either.
Bledsoe's information was so important they did not go see Mary.
Porter has to drive her downtown.
Not the Marsalis bus but plenty of false witnesses.
Nope not the Bishop bus, but a false sighting.

Yet not a freaking peep from ANYONE on the Beckley bus.......
A bus Lee supposedly rides every week day to work except Mondays and Paine family birthdays.

No Beckley bus driver, no Beckley passengers, no transfers from Lee's supposed means of transportation to/from work to his supposedly tiny room with no key for the lock.
Yes its all so clear.

Bart is on FIRE!!
Thanks a million.
HERE IS REDLICH TAKE ON THE BALL N BELIN BUS BS. 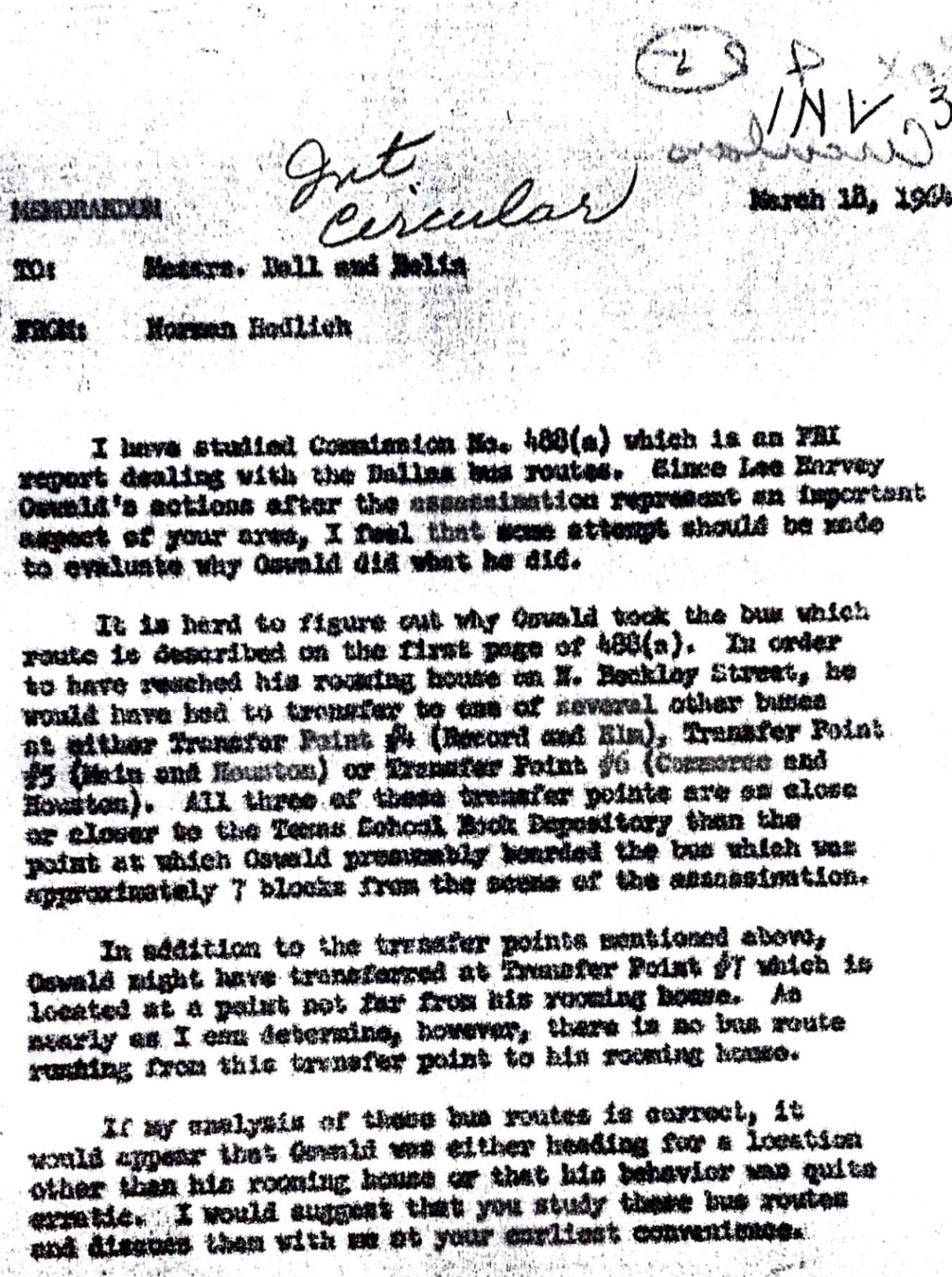 March 18 1964 Norman studied the bus routes 488a
he finds the supplied route by Ball n Belin is less than logical and they should restudy these routes ... no mention directly of BECKLEY BUS but memo might have well have been labeled:
"Beckley Bus Where Are You"

When they made up the Oswald on a bus story maybe they realized that had he walked to one of those closer transfer points, he would have had to stand there and wait for the bus in the middle of a boiling cauldron of cops, newsmen and picture takers. There he stands, yet no one sees him and he doesn't show up in a picture where he most certainly should have? Not good. Walk him up a few blocks, away from the action, and let him board a bus there. No chance of proving he wasn't even there at all.

That or they simply had info that nobody got on at those stops at that time, so they walked him to where there was an actual stop.
_________________
Release clear scans. Reveal the truth about Prayer Man. Preserve the history of the assassination of JFK.

The Beckley bus driver was avoided in either conformation or denial of a newspaper wrapped rifle (or package) by Lee riding his bus Wednesday morning. Jack Cody was left hangin' by FBI and Warren Commissioners.

Thanks Mick youre no slouch yourself
Ya kicked a few legs from under this case.

What amazes me is anyone still citing McWatters bus as Lee's escape plan or using it to get a bus pass and bullets into evidence.
That rot would be tossed out and the two cops Boyd n Simms look dirty for trying to pin it on Lee.
McWatters said it was not Lee and gives the name of the boy. Milton Jones the laughing boy says its not Lee its him.
So Lee was never on that bus yet police magically have a transfer from it (or a booklet of transfers)
Nada fingerprints nor other physical evidence the transfer or bullets were Lee's.
It all points to Dallas Police creating fake evidence.
Why would they need to doctor the evidence if they have Lee on a bus with McWatters and Bledsoe as witnesses... well.... ummm okay as a witness she sucked and he proved it wasnt Lee and not downtown or either.

This is proven planting or faking evidence Mick.
Plain and simple.
They went a bit overboard in stitching Lee up quickly... and it shows!
If anyone asks for proof the DPD were bad cops this is a perfect example.
Or the warren commission suborning perjury this is it.
Cheers!

Good on ya Ed,

It all points to Dallas Police creating fake evidence.

Yep, sure does and this thread proves that beyond a reasonable doubt. Case reopened?


If this shows Lee Oswald was set up and framed by the DPD as they'd done many times before and after his murder then surely that warrants a new investigation - cold case or not - surely. Murder in Texas has no statue of limitations - right?
That's why this thread is vitally important work  because it clearly demonstrates and proves that the DPD faked the evidence and used it to frame Oswald.
_________________
I'm just a patsy!

So many of the Dallas cops appear to have been not much more than criminals with uniforms and badges.
_________________
Out With Bill Shelley In Front.